Among the speakers at the event, sponsored by the Dwight D. Opperman Institute of Judicial Administration (IJA) and the NYU Journal of Legislation and Public Policy, was Judge Jack Weinstein of the U.S. District Court for the Eastern District of New York, who served as one of the CPLR’s principal architects in his role as reporter to the advisory committee on practice and procedure. Oscar Chase, Russell D. Niles Professor of Law and co-chair of the IJA, was the first speaker, but not the last, to hint at the CPLR’s imperfections, deeming it a “great code, great in its scope, great in the reforms it made, and, as I think Judge Weinstein would be the first to say, not great in every detail, because unfortunately the legislature had the nerve to make some edits to this great document.” 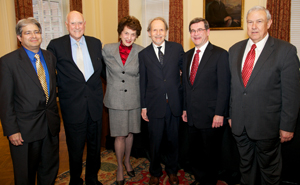 Weinstein described the process of rewriting New York State’s civil procedure code, a task he took on more than 50 years ago, and gave the audience insight into how certain shortcomings in the finished product inevitably arose. “Justice needs constant improvement because life is constantly changing,” said Weinstein. “The work to improve justice never ends.” He added a mild warning about future challenges the state could face in implementing the CPLR: “To the extent that substantive law becomes more complex and expands and the courts are not given the facilities and the judge power that they need to cover these expanded powers, delays will become greater.”

Judith Kaye ’62, former chief judge of New York, expressed her delight at sharing a “glorious golden anniversary” with the CPLR: she was admitted to the New York bar the same month that the CPLR was adopted, which meant that she had to study both the outgoing code and the incoming one to prepare for her bar exam. “From day one of my graduation from law school I was completely out of date,” she said wryly.

Reflecting on different ways in which New York’s courts and legislature have attempted to bring the CPLR up to date since its inception, Kaye said, “I have come to think of all of the activity over the decades as the graceful maturation of the statute as it keeps pace with radical societal change, sometimes by judicial construction, sometimes by legislative reform. In that vital process there is very lively dialogue between the courts and our partners across government and across the profession.”

William Nelson ’65, Judge Edward Weinfeld Professor of Law, brought to the discussion his perspective as a legal historian.  He began with the potential damper that the Field Code of 1848, one of New York’s earlier procedural codes, had enjoyed much wider national influence than the CPLR has. But, he added, this did not negate the current code’s importance; the CPLR has endured longer than the Field Code and each of its successors. “Designed by Judge Weinstein for conservative purposes to preserve what was best in New York practice rather than to impose radical innovations for others to copy, the CPLR has served New York well,” said Nelson.

Professor Vincent Alexander of St. John's University School of Law provided his viewpoint as an academic expert on New York civil procedure. Recalling with chagrin a 1928 commencement address in which Benjamin Cardozo referred to “the piffle paffle of procedure,” Alexander examined the CPLR from the viewpoints of classroom teaching, legal scholarship, and the code’s utility to the legal community. He was not the only speaker to suggest that returning the power to amend the CPLR to the judicial branch, rather than leaving it to the legislature with all its political crosscurrents, would be a significant improvement.

David Ferstendig ’81, a civil and commercial litigator and an expert on New York procedure, brought a practitioner’s perspective to round out the evening. While bemoaning the confusing and inconsistent hurdles placed before attorneys practicing in New York, Ferstendig acknowledged that it was the difficulties in having the legislature make amendments to the CPLR as new needs arise, rather than the code itself, that presented the major challenge. “I think the courts have done a wonderful job in trying to fill in the gaps,” said Ferstendig. “The problem for practitioners is that there are just too many areas that we have to worry about in connection with the most basic elements of practicing.”