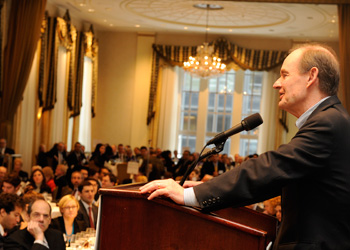 At the NYU School of Law’s Annual Alumni Luncheon on January 28, Dean Richard Revesz called Law School Trustee and guest speaker David Boies (LL.M. ’67) “one of the most renowned trial attorneys in our country” in introducing Boies’s lecture, “Why Marriage Equality is Important to Everyone.”

The founder and chairman of Boies, Schiller & Flexner, Boies has argued some of the biggest cases of the past two decades, including General William Westmoreland’s libel suit against CBS, the infamous Bush v. Gore, and the U.S. government’s antitrust litigation against Microsoft. His professional accomplishments have been recognized by numerous organizations, and last year Time named him one of the 100 most influential people in the world.

Boies’s current big case promises to make him even more influential. Along with Theodore Olson, a member of the Dwight D. Opperman Institute of Judicial Administration’s board of directors, Boies is challenging the constitutionality of Proposition 8, the ballot measure that amended the California state constitution to prohibit same-sex marriage. The unlikely co-counsels, who argued the opposite sides of Bush v. Gore in 2000, currently await a decision from the U.S. Court of Appeals for the Ninth Circuit. The stakes could not be higher; many expect the case to reach the Supreme Court.

The stakes, Boies said, also could not be more universal. “Each one of us has a stake in the equality of our country, of the non-discriminatory nature of this country,” he said. “This is a nation that is defined not by race, not by a particular ethnic group, not even by language. It is defined by culture, and that culture is a culture of equality, of opportunity, of non-discrimination.”

Boies and Olson’s legal argument has three components. First, marriage is a fundamental right that the Supreme Court has continually upheld. Second, depriving same-sex couples of that right causes both them and their children direct harm. Finally, outlawing same-sex marriage fails to advance any legitimate state interest.

Boies acknowledged that religion played a part, recalling how his opponents in the case had suggested that Boies was “elevating science above religion.”

“We tried to explain that that’s exactly what the courts are about,” he said, “that the courts are not about replacing religion. The American Constitution guarantees the right of free exercise, but it also guarantees that there will be no establishment of religion.... If this is a religious fight, the Constitution guarantees that every church will be able to preach what it believes is the will of God as that church sees it, but it does not have the right to impose that view on other people.”

How can Boies and Olson, with their almost diametrically opposed political viewpoints, agree on the issue of same-sex marriage? It boils down to logic, Boies explained.

“If you accept as a factual matter what the trial records showed, which is that limiting marriage to people of different sexes harms gays and lesbians and their children, and does not help heterosexual marriage, then I suggest there is no rational state policy that permits the state to do that.”