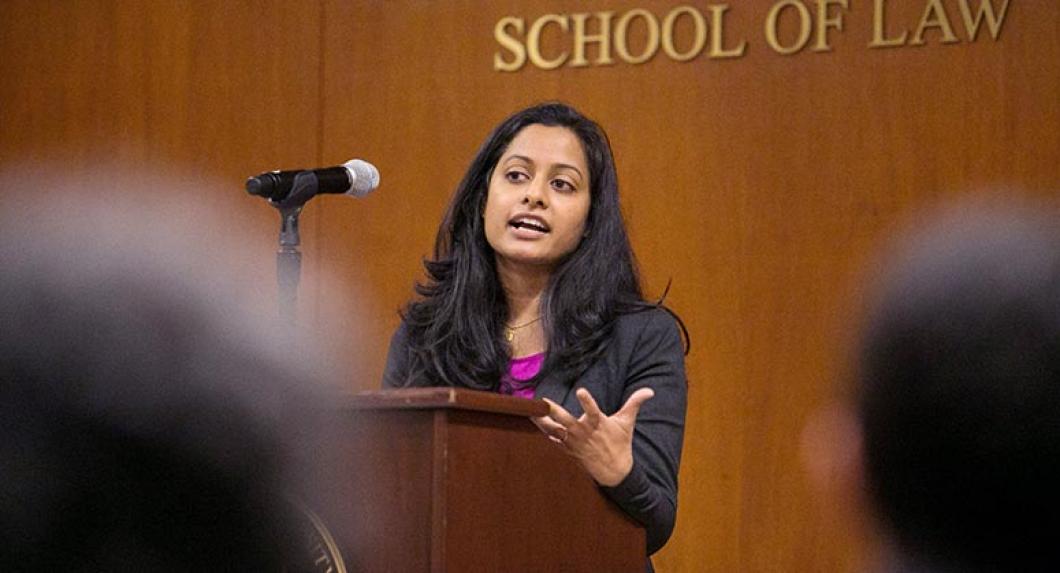 At the 10th annual alumnae reception of NYU Law’s Women of Color Collective (WoCC), the student organization honored Associate Professor of Clinical Law Alina Das ’05 with its 2017 Woman of Distinction Award for her work on behalf of immigrants’ rights, including the creation of the NYU Immigrant Defense Initiative. Accepting her award in a poignant and personal speech, Das referred to the theme of the night, “Building Bridges, Tearing Down Walls,” as a call to action at a time when immigrant rights work is especially urgent.

“Like many of you, I’ve seen things over the past few months that I never thought I would see,” Das said, referring to the Trump administration’s immigration ban and recent accounts of racist rhetoric and violence. Das spoke also of her own mother and father, who immigrated to the United States from India more than 40 years ago and who live in Kansas, where two Indian immigrant engineers were recently shot—and one killed—by a gunman who shouted “Get out of my country” while shooting. Recalling a conversation with her mother in the wake of the shooting, Das said, “This is the first time in her entire life—in 40 years being in this country—that she feels unsafe, not in spite of the leadership in this country, but because of it.”

In wondering how to find the power, in the midst of conflict, to build bridges and tear down walls, Das said that she looked to the strength shown by the many women of color in her life: her mother, colleagues, students, and particularly her clients in the NYU Law Immigrant Rights Clinic (IRC). “As an immigrant rights lawyer, I have had the privilege of representing women who have faced incredible amounts of oppression in a terrible system and have not only survived, but thrived.”

Das recounted stories of several of these clients whose strength in the face of persecution has particularly inspired her. Das described one of these clients, whom she called Madelena, as a Mexican transgender woman who knew from a very early age that she was not a boy, who faced discrimination and abuse for her identity, and who risked her life to come to the United States.  “She chose to come to a country where she thought she would be able to be free as the woman that she always knew she was,” Das said.

Although Madelena was detained and threatened with deportation for crossing the border illegally, thanks in part to the work of IRC students, she won her asylum case. “Despite everything that she experienced on this side of the border,” said Das, “she still loves and contributes to this country every day by organizing other trans women to know that they are not alone and that their rights are respected.”

The clinic’s most recent client, Das said, was an undocumented Ghanaian woman living in the Bronx who, while dropping her four-year-old son off at school, was detained for a conviction more than a decade old. Das noted that it was particularly meaningful to watch her clinic students, WoCC co-chair Samah McGona ’18 and Oluwadamilola (Dami) Obaro ’17, represent this client: “It was a beautiful thing for me to see these three women of color— these three women from West Africa—come together and fight a system of oppression that is designed to tear our communities apart.”