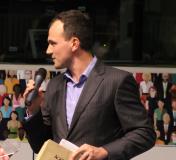 Originally from Australia, Alasdair conducted his legal education in London and is qualified solicitor in England and Wales.

He worked for many years at two of the top international law firms where he specialised in regulatory law, particularly in relation to environmental and product liability issues. During this time, he worked on domestic and EU matters for top-tier international clients active in a variety of sectors.  Whilst in private practice, he also undertook several stints working in Germany.

Alasdair has always been heavily involved in pro bono work, particularly through advising litigants in person at the Royal Courts of Justice in London, and in assisting on projects connected with migrants' rights.  More recently, Alasdair has been increasingly involved in public interest law. He currently works for The Good Lobby, a Brussels-based civil society organisation, and is involved with the World Sustainability Fund, an NGO dedicated to assisting national governments meet their sustainability goals.

Alasdair holds an LLM in Environment, Planning and Regulatory Law from Nottingham Law School. During these studies, Alasdair's thesis focused on the regulation of unconventional hydrocarbons.

He is also a contributor to the online legal journal, Regulating for Globalisation.

Hanna Agbanrin is the NYU Law in Paris Program Assistant. A native of Paris, she is a recent graduate in Political Science from Columbia University and is currently pursuing a dual master's in European Affairs from Sciences Po Pairs and the London School of Economics.