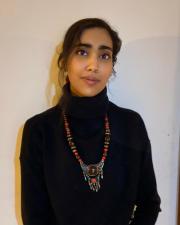 Beenish Riaz ’20 will be working as a Helton Fellow for the Aurat Foundation this year. Before coming to law school, she completed her undergraduate studies in political science and English with a focus on human rights and humanitarianism with honors from Macalester College. From Kenya and Pakistan, she has a passion for international human rights law and has worked at many human rights organizations both in the United States and abroad. She is also a creative writer and has written and published novellas and poems. At law school, Beenish was an international law and human rights fellow at Justice Project Pakistan, an ILLJ scholar, and the Book Annotations editor for the Journal of International Law and Politics. She also served as a teacher’s assistant, a research assistant, and a student advocate at the Global Justice Clinic for two years.

Her Helton project addresses the pervasive problem of violence against women in Pakistan. It takes a twofold approach to change. She begins with participatory action research involving interviewing a broad and diverse cross-section of women, community leaders, policymakers, and ministry officials and using focus groups with men and women to identify why and where certain laws on violence against women fail in implementation and practice and what might help. Following the ethos of participatory action, project participants are key co-thinkers with their lived struggles informing any knowledge of the deficiencies in the laws and any recommendations for change. The second part of the project uses this research to fuel continuing mobilization of women through legal and policy advocacy, demanding state responsiveness at the local, national, and international levels and attempting to shift societal attitudes including by using the media. 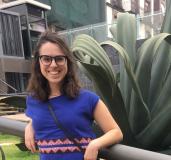 Jamie Kessler JD ’19 will be an Arthur Helton Human Rights Fellow at Equal Rights Beyond Borders in Chios, Greece. As a Helton Fellow, Jamie will be working with asylum seekers applying for asylum in the European Union and researching conditions for LGBTQIA asylum seekers in Greece.

While at NYU Law, Jamie interned at Catholic Migration Services in Brooklyn, New York and was an International Law and Human Rights Fellow at the UNHCR in Amman, Jordan. She was also a student in the LGBTQ Rights Externship where she worked with Brooklyn Legal Services’ LGBTQ/HIV Advocacy United and the Immigrant Defense Clinic where she worked with The Legal Aid Society’s Immigration Law Unit. 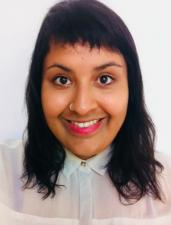 S. Priya Morley LLM ’19 is a Helton Fellow with IMUMI (Instituto para las Mujeres en la Migración), a civil society organization based in Mexico City that promotes the rights of migrant women in Mexico, whether they are staying in, transiting through, or returned to the country from the United States. As a Helton Fellow, Priya is designing and supervising a year-long research project, including qualitative interviews and desk research, on the experience of Black migrant women (from Africa and the Caribbean) in Mexico.

Before attending NYU, Priya worked in Toronto as a litigator and judicial law clerk. She also has experience working with civil society organizations in Canada, Kenya, Germany, and Mexico on women’s and children’s rights, sexual violence, migration, and human rights education. She earned LLB and BCL (common law and civil law) degrees from McGill University and a BA in International Relations from the University of British Columbia. 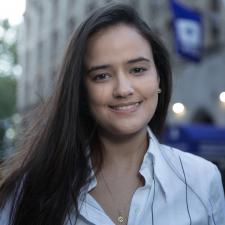 Joana Nabuco LLM '17 will start her Helton fellowship in September 2017 at Conectas Human Rights, a non-governmental and not-for-profit organization based in São Paulo, Brazil. Joana’s Helton fellowship project focuses on the fulfillment of the right to an effective remedy in the context of the Doce River disaster, in which the failure of a mining tailings dam affected more than 3 million people, endangered 400 species, and caused the release of 32 million cubic meters of toxic residue into one of Brazil’s main river basins. Over a year after the disaster, there is still no adequate remedy for the affected communities. The programs that the companies are currently developing are insufficient to repair the damage and to avoid future harm and most of the survivors are still suffering from health problems and the risk of further contamination. Those who were forcedly displaced are lodged in temporary accommodation with no clear indication of when they will return to the rural area.

The main component of Joana’s project involves the development of a comprehensive report assessing the judicial and non-judicial remedy mechanisms available to the survivors of the disaster against international standards on the right to an effective remedy. The study will be presented in international forums, such as the 2017 United Nations Forum on Business and Human Rights, which will focus on the issue of access to remedy for business-related human rights abuses. In addition, Joana also intends to engage in strategic domestic litigation seeking compensation for the survivors of the Doce River case. This will include mapping and analyzing strategic pending lawsuits to identify what kinds of legal support Conectas can provide to the ongoing efforts undertaken by public authorities in Brazil.

At NYU, Joana was the Vice-President of the Brazilian Legal Society and a member of the Global Justice Clinic, in which she worked drafting strategies to hold corporate and government actors accountable for the negative effects of mining activity in Guyana, Ghana and in the Democratic Republic of Congo. Prior to the LL.M., Joana worked as a lawyer at Binenbojm, Gama and Carvalho Britto Advocacia, a law firm specialized in impact public interest litigation and strategic advocacy on topics related to constitutional and administrative law, such as freedom of expression and anti-corruption.

Shreya Rastogi LLM '17 will be working with the Centre on the Death Penalty at National Law University in New Delhi. The Centre was established in August 2014 with the aim to undertake new areas of research regarding capital punishment in India, ensure access to effective legal representation for prisoners on death row, and explore new fronts for public discourse on the death penalty.

During her project, Shreya will focus on developing a robust DNA forensics practice at the Centre and advocate for more reliable use of such evidence in India. While the use of DNA profiling in criminal cases, especially those concerning rape, has increased over the last decade, its rollout has been extremely poor and bears grave consequences for criminal defendants. The law currently does not provide any guidance on how these samples must be collected, stored or tested. In the absence of national standards for testing, quality assurance and accreditation, government-run forensic laboratories follow different procedures and have little oversight. Further, the DNA reports submitted in criminal cases do not contain any statistical analysis of the ‘match’ obtained between the crime scene evidence and the suspect’s DNA profile. As per the criminal procedure, forensic experts who conduct these examinations may also be exempted from testifying during trial. Due to these factors, DNA evidence is rarely challenged and leads to criminal convictions for which defendants may be sentenced to long prison terms or even the death penalty. As part of this project, Shreya will engage with forensic laboratories in India to understand the procedures followed by them during DNA examinations. Through these efforts, she seeks to compare the forensic practices in India which those followed in other jurisdictions and analyse their compliance with international standards.  She will also network with forensic consultants to discuss the emerging complexities in DNA science and create training materials for defense lawyers to effectively engage with such evidence.

Patricia is situated at the intersection of the organization’s refugee and equality and non-discrimination (END) sections. She works with clients who have compounded vulnerability, firstly because of their situation as a refugee or stateless individual, and secondly because of their sexual identity, gender (identity), or because they have not reached the age of maturity.

Much of her work has focused on creating pathways to citizenship for children who are undocumented in South Africa. These children are often at great risk of statelessness as they lack either the right or the ability to access citizenship in any country. These children require appropriate documentation in order to ensure critical, constitutional rights such as access to education, access to healthcare, freedom of movement, and many more. Notably, there is a gap within South African domestic legislation wherein there is no normal procedure through which these individuals can attempt to normalize their status or gain adequate documentation. In order to answer this, Patricia is involved both in filing individual appeals for status/documentation and in organizing strategic litigation that seeks to pressure lawmakers into creating a holistic legal solution.

Other work she is engaging in includes: non-discrimination work regarding lesbian, gay, bisexual, transsexual, and intersex refugees; advocacy regarding international norms within refugee law; and gender equality rights surrounding women’s right to self-identification and autonomy. Notably, Patricia’s current work mirrors work she undertook as a student at NYU Law, including the summer she spent with UNHCR in Beirut, Lebanon where she was a statelessness officer and her involvement as a Student Advocate for International Refugee Assistance Project (IRAP). 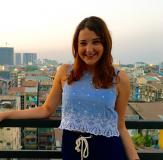 Kate Taylor LLM '16 completed the Helton Fellowship in Myanmar at EarthRights International (ERI) – a non-profit non-governmental organization that combines both legal and grassroots approaches in defense of human rights and the environment.

Kate was also given the opportunity to collaborate with local lawyers and community organizers on human rights and environmental campaigns throughout Myanmar. She worked in partnership with the Dawei Pro Bono Lawyers Network to pursue a number of judicial and non-judicial advocacy strategies with communities harmed by mining operations in southern Myanmar, including appellate litigation, publishing human rights reports, public participation in EIA processes, and engaging with the complaints mechanism of the Thai National Human Rights Commission.

Kate completed an LLM (International Legal Studies) at NYU, where she was a CHRGJ Human Rights Scholar, and was awarded the Jerome D. Lipper Award for Distinction in the International Legal Studies Program. During her time at NYU, Kate was a clinical student in the Global Justice Clinic, working on human rights and justice in Haiti's mining sector. She went on to publish work on community-led accountability of development finance in Haiti's gold mining sector.

Prior to attending NYU, Kate was a legal fellow at the Institute for Justice and Democracy in Haiti, pursuing UN accountability for the Haitian cholera epidemic. She worked for three years as an academic researcher in Australia, focusing on access to justice for mining-affected communities throughout Asia. She will continue her passion for interdisciplinary research on international human rights law, assuming a role as a research scholar with the Bernard and Audre Center for Human Rights and Justice at the University of Texas's School of Law in Austin.