Lisa Hoyes joined the Law School from the Federal Defenders of New York, where she served as an Assistant Federal Defender from 2009 to 2015. At Federal Defenders, Lisa handled a wide variety of cases, including terrorism, narcotics, weapons, immigration, and securities fraud. As the Federal Defender liaison to two innovative court diversion programs, one for young offenders and one for defendants struggling with substance abuse, Lisa worked alongside the judges of the Eastern District of New York to implement and expand the programs.

Prior to joining the Federal Defenders, Lisa spent nearly a decade at the Bronx Defenders, advocating for thousands of indigent clients. She took a leave of absence from the Bronx Defenders in 2004 to serve as an NYU Law Fellow at the Equal Justice Initiative, working with Professor of Clinical Law Bryan Stevenson to represent death row inmates and other offenders facing life sentences under three-strikes laws. Lisa later returned to the Bronx Defenders as a Supervising Attorney and a member of the Advanced Felony Trial Unit.

After graduating from NYU Law, Lisa won a Soros Justice Postgraduate Fellowship to undertake a project she designed to provide civil legal services to juveniles involved in delinquency proceedings and the criminal justice system. For two years, she provided immigration, housing, family law, and benefits representation to young people under the auspices of Legal Aid’s Juvenile Rights Division and The Door’s Legal Services Center.

While at the Law School, Lisa was a Sinsheimer Scholar, an active member of BALSA, an associate editor of NYU Law Review, and a participant in the Juvenile Rights clinic. Lisa received a BA in Language and Culture and Political Science from SUNY Purchase. Contact Lisa Hoyes 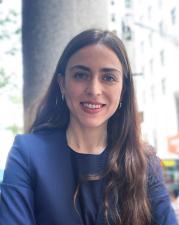 Carolina van der Mensbrugghe joined the Public Interest Law Center (PILC) in January 2022 after having worked as a human rights attorney both in the United States and abroad. Carolina currently volunteers as a co-supervisor of the Walter Leitner International Human Rights Clinic at Fordham Law School. Through her work with the clinic, Carolina is building and co-supervising projects that address human rights violations and intersectional gender justice issues.

Before joining PILC, Carolina worked as a U.S. Human Rights Fellow for the Center for Reproductive Rights (CRR) and was responsible for using international human rights law to strengthen domestic legal advocacy and advancing reproductive rights as fundamental human rights that governments around the world are obligated to protect, respect, and fulfill.

Carolina was based in Tokyo working at Amnesty International Japan, where she focused on designing and implementing a comprehensive gender and sexuality human rights educational materials targeting secondary schools and universities.

Carolina received her Juris Doctor from Fordham University School of Law, where she was a Crowley Scholar for International Law & Justice and studied for one semester abroad at Waseda Law School in Tokyo, Japan. Her clinical work included criminal justice reform efforts to improve conditions for prisoners on death row in Japan and capacity building training on human rights for both sex worker rights activists in Mauritius and new female members of parliament in Myanmar. She worked for the Global Justice Center and led a reproductive rights fact-finding mission in partnership with grassroots organizations in Louisiana as part of her work with the Fordham Chapter of If/When/How. Prior to law school, Carolina used storytelling as an advocacy tool while working as a documentary producer.

Emily Kernan joined the Public Interest Law Center in August 2015 from Advocates for Children of New York (AFC). As a staff attorney at AFC, Emily worked to improve educational outcomes for children involved in the child welfare system through individual representation and capacity-building efforts with foster care agencies. During this time, she also served as a part-time Public Interest Career Advisor at Columbia Law School’s Social Justice Initiatives, where she counseled law students and graduates about fellowships and public interest opportunities in child advocacy and other fields.

Before joining AFC in 2012, Emily worked at Lawyers For Children as Director of the Mental Health Advocacy Project, a project she started with a Skadden Fellowship in 2007. She represented children in foster care with mental health issues in New York City Family Court proceedings. She also engaged in policy work to tackle systemic problems, such as the over-prescription of psychotropic medications to children in care.

Emily received her JD from Harvard Law School, where she actively participated in the Child Advocacy Program and served as Co-President of the student group Child and Youth Advocates. Her clinical work involved court reform efforts to expedite permanency for children in foster care in Washington State and education advocacy on behalf of children exposed to family violence in Boston. Emily spent her summers at the National Center for Youth Law in Oakland, California and at The Door’s Legal Services Center in New York City. Emily received an AB in Psychology from Duke University in 2003. Contact Emily Kernan

Kathryn Neilson joined the Public Interest Law Center in 2019 from Bronx Legal Services, where she had spent 13 years fighting on behalf of low-income tenants in the Bronx, as a Staff Attorney and then as Director of the Housing Unit. At Bronx Legal Services, Katie oversaw the rapid expansion of housing rights representation through the implementation of Universal Access to Counsel in Housing Court, a city law that ensures legal representation for low-income New Yorkers facing eviction. Katie has also taught a Housing Litigation Externship Seminar at Fordham University School of Law.

Katie earned her J.D. from Fordham University School of Law, where she was a Stein Scholar for Public Interest. At Fordham, she participated in the Housing Rights Clinic, as both a clinical student and a teaching assistant, and served as the Chair of Fordham’s Housing Advocacy Project. During law school, she worked with Northern Manhattan Improvement Corporation, Urban Justice Center’s Street Vendor Project, the Center for Economic and Social Justice and the Workers’ Rights Law Center.

Prior to attending law school, Katie worked at the City Bar Justice Center as the Director of the Public Service Network, a program to connect lawyers with pro bono opportunities throughout New York City.

Before joining the Public Interest Law Center in 2018, Naomi Sunshine was Associate Director of NYU’s Lawyering program, where she taught Lawyering for three years. Prior to that, Naomi was an associate at public interest law firms in New York and San Francisco. There, she represented workers and consumers in federal and state wage and hour, employment discrimination, sexual orientation discrimination, consumer, and disability access class actions. She previously clerked for Judge Constance Baker Motley and Judge Victor Marrero of the United States District Court for the Southern District of New York.

Gail Zweig joined the Public Interest Law Center in September 2015 after having served in various capacities in the public and private sectors, and taught at several law schools, including on the NYU Law Lawyering faculty. Before joining PILC, Gail was Counsel to a small litigation boutique, concentrating her practice on representing a wide variety of clients in federal and state courts, and before regulatory bodies, mediators and arbitrators. Previously, Gail spent approximately six years as an Assistant US Attorney in the District of New Jersey in both the Criminal and Appeals Divisions.

Prior to being a federal prosecutor, Gail was Litigation Counsel and Special Advisor to the General Counsel of the New York City Council, and Counsel to its State and Federal Legislation Committee. She worked on various litigation matters concerning separation-of-powers issues under the New York City Charter, the City’s constitution. Gail also collaborated with legislators, mayoral agencies, and members of the public on developing a broad array of legislation. 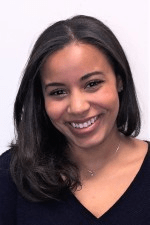 Vee Rodriguez originally joined NYU Law in January 2018. She started as the OCS/PILC/JCO receptionist and joined the OCS team as a Senior Placement Assistant in June 2018. She joined the PILC team as a Programs Manager in March 2020. Prior to joining the law school, Vee worked as a Project Coordinator for a startup, where she worked alongside Architects, Engineers, Contractors and City Agencies to present solutions for the specific needs of property owners. Vee received her MA in Urban Affairs and her BA in Psychology from Queens College, CUNY.  Contact Vee Rodriguez 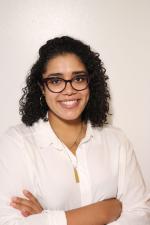 Maddie (she/her) joined the Public Interest Law Center in September 2021. She manages the Root-Tilden-Kern Scholarship Program and other administrative tasks for the Public Interest Law Center. Before PILC, she worked for three years at the NYU Law Office of Career Services as a Recruitment and Marketing Assistant. She holds a degree in Psychology from Williams College in Williamstown, MA and is currently working toward her MBA at NYU Stern School of Business. 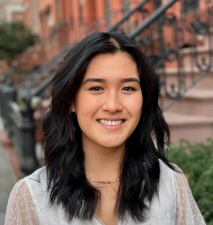 Phuong Tran joined the Public Interest Law Center in November 2021. Before PILC, she worked for three years at the NYU McSilver Institute for Poverty Policy and Research as a junior research scientist, coordinating the Clinical Education & Innovation Department's initiatives with the NY State Office of Mental Health in behavioral health, children's mental health, social justice, and policy. She holds a degree in Neuroscience & Behavioral Biology from Emory University in Atlanta, GA, where she was the Director of the Alternative Breaks division of Volunteer Emory, organizing programs that sent students on social justice service projects across the southeast. Phuong is currently working toward her MBA at NYU Stern School of Business.