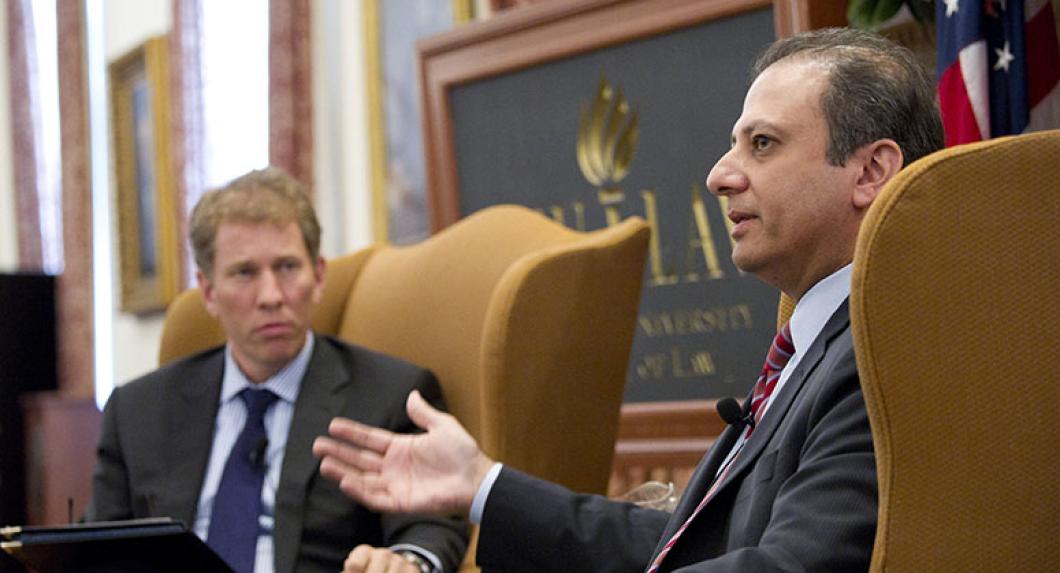 At the October 7 Milbank Tweed Forum, Preet Bharara, US attorney for the Southern District of New York, sat down for a chat with Dean Trevor Morrison. They discussed the role of Bharara’s office in deterring public corruption, as well as a recent blow to insider trading prosecutions.

Bharara has made waves for his dogged prosecution of insider trading, but the Supreme Court’s denial of cert in US v. Newman on Monday was a setback for his office. In Newman, the Second Circuit delivered a game-changing decision, ruling that to be criminally liable, providers of inside tips must receive a “personal benefit” in return. By declining to hear the federal government’s appeal, the Supreme Court has deferred to this interpretation. Under these rules, Bharara theorized, the head of a major company could pass a tip to a friend or family member knowing that person could stand to make millions in the markets, and claim it was merely a gift. Though he confirmed that many of the cases his office had prosecuted would still stand, Bharara was nevertheless dismayed.

“Is that how you get people to have confidence in the securities markets?” he asked. “Apparently, there’s a decent argument that you can [trade inside information] and get away with it. I think reasonable people can decide whether or not that’s a lovely thing.”

On other topics, Bharara stayed true to his reputation for challenging the status quo. Regarding concerns about mass incarceration, Bharara advocated for the “reexamination and reform” of longstanding practices. Condemning the poor treatment many inmates face, he called attention to his office’s role in winning a settlement with New York City to improve conditions on Rikers Island, including ending solitary confinement for juveniles. “Being behind bars does not mean beyond the Constitution,” he said.

Broadening his scope to include Fishkill Correctional Facility north of the city, he asked bluntly, “Is there a systemic problem generally in the country—but more specifically, because I’m in New York—is there a particular problem with the State Department of Corrections and how they supervise these various facilities in the state?” He suggested it might be time to take a “very hard look” at its operations.

Bharara also has made headlines for his attention to public corruption, famously charging both the Democratic speaker of the New York State Assembly and the Republican president and majority leader of the New York State Senate with federal corruption offenses in the first half of this year. Morrison noted that, as a result, the New York Observer had just named Bharara first on its October 6 list of Albany’s Top 40 Power Players.

Bharara’s frank statements to the press, particularly around Albany’s public corruption cases, have stirred controversy; nonetheless, he was adamant that prosecutors must speak out on such issues for the sake of public education and deterrence. He stressed that in other contexts, such as promoting education or raising awareness of gang violence, the voices of prosecutors and district attorneys are welcome: “I don’t, frankly, get why it’s different in the public corruption context.” He dismissed such criticisms as being typical in situations that involve “sophisticated and high-priced lawyers who can afford to make accusations like that.” Given the significant role political figures play in shaping our lives, he considers it part of his job to speak out, adding, “I would be, in some ways, remiss if I didn’t talk about those things.”

Bharara encouraged students to pursue work in the public sector, describing it in practical terms—young lawyers in the public sector have more opportunities to be in the courtroom than their peers in the private sector—and idealistic ones. “A good prosecutor who exercises discretion properly can do more to save people than a defense lawyer who has just one client at a time.”

For Bharara, this calling has been “gratifying.”