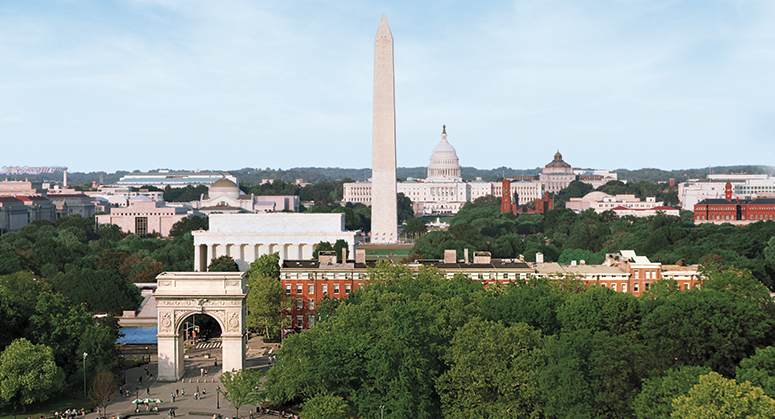 Washington, DC, vies with California as the most popular locale, after New York, for new NYU Law grads to begin their legal careers. For many students, the first step inside the Beltway is a summer internship, working on pressing national issues where they can put into practice the knowledge gained during their 1L and 2L years.

“I was drawn to working in DC for my 2L summer because one of my favorite 1L classes was Legislation and the Regulatory State,” says Tim Duncheon ’20, who found his internship through the Office of Career Service’s Early Interview Week, a three-day event which brings over 350 employers to the Law School each year. Duncheon spent the past summer working in appellate litigation at Hogan Lovells. “[Legislation and the Regulatory State] teaches you about administrative law and how private parties interact with government agencies to improve or strike down policies...and I was really interested and excited by that work,” Duncheon says.

During his time at Hogan Lovells, he wrote part of an opposition brief that was filed with the Supreme Court. While he will be clerking in California at the US Ninth Circuit Court of Appeals after graduation, he hopes to return to DC to do government work at some point in his career.

Anna Applebaum ’21 and Alexandria Jackman ’20 both found their DC summer internships through the Public Interest Law Center (PILC). Each year, PILC hosts a number of networking events, culminating in the annual PILC Career Fair, which brings together employers, recent graduates, and law students from across the country for both formal interviews and informal information sessions. Applebaum, who interviewed for her position during the fair, spent her summer at the Advancement Project, a racial justice and equity nonprofit with a focus on community organizing.

“There's a somewhat small number of organizations that do racial justice specifically focused on impact litigation work,” she says of the practice area she hopes to enter upon graduation. Alexandria Jackman ’20, who spent her 1L summer at a public defender’s office in New York, worked this past summer at the DC Public Defender Service. Jackman noted that she enjoyed her employer’s emphasis on a sustainable work-life balance, which can be rare in public defense work.

“I love DC—I love that there are so many young people interested in so many different causes,” says Karis Stubblefield ’21, who spent the past summer working for the US Department of Homeland Security (DHS) in the Office for Civil Rights and Civil Liberties, where she worked in the compliance division. This division served as an internal watchdog on immigration and asylum issues during her internship, Stubblefield says; she provided legal research for cases involving third-party civil rights violation complaints filed against DHS employees.

“[The compliance division] really gave me a lot of responsibility,” Stubblefield says, adding, “The sheer number of complaints that the office would get daily from people at the border who have experienced incredible trauma shows how much of a need there is for legal minds in that space right now.” She aims to use the experience to inform pro bono work as she pursues a career at a firm in New York next summer. “I told my employers, ‘I can go back to NYU and shout from the rooftops about this position because there are so many law school students interested in doing this kind of work,” Stubblefield says. “I felt like I was helping people who were doing important work.”