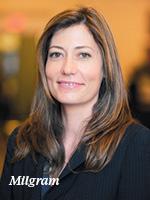 Since founding NYU Law’s Policing Project last year, Barry Friedman, Jacob D. Fuchsberg Professor of Law and Affiliated Professor of Politics, has devoted himself to bringing democratic governance to policing. Finding receptive audiences both within law enforcement and in citizens eager for change, Friedman and his dedicated team are working in communities across the country to foster greater engagement between law enforcement and those they serve. Friedman, whose book Unwarranted: Policing Without Permission is out in February 2017, recently sat down with Anne Milgram ’96, former New Jersey attorney general, former vice president for criminal justice at the Laura and John Arnold Foundation—and now Professor of Practice and Distinguished Scholar in Residence at the Law School, to discuss the state of American policing and how the Policing Project is working to improve it.

Milgram: How should we be thinking about transforming policing?

Friedman: Even though we look at different problems around policing as separate things—racial profiling, stop-and-frisk, NSA data collection, StingRays [cell phone surveillance devices]—they are all related in one fundamental way, which is that we have lost track of the fact that policing, like everything else in society, should be governed democratically.

Milgram:  And what does it mean to govern a police department democratically?

Friedman: It just means that when the departments do their work, there is a set of rules in place, of which the public is aware, that governs what they do.

Milgram: The mission of the Policing Project is what?

Friedman: We are doing three things. We’re writing rules and best practices to help police departments and guide them. We are engaging in cost-benefit analysis of policing practices to make sure that they do more good than harm. But the real core is community engagement. We are working very, very closely with law enforcement to help them engage their communities in formulating policies and practices.

Milgram: In most cities, people vote for mayor; the mayor appoints a police chief, and that’s the extent of the public’s involvement in the police department. How does public engagement change that? If you’re Joe Citizen, what role do you now have in the policing process? Or what engagement do you now have?

Milgram: Public safety. Kids walk to and from school; grandparents can walk around the corner for a carton of milk; people feel comfortable in their homes and parks and living spaces.

Friedman: It’s the first, most important thing; without that we have nothing. So the pressure is always relentless to get that, and seldom do we stop and think about at what cost? That’s where democracy at retail comes in. Police chiefs are action people—but you need to temper that with some public guidance about which of a variety of tactics are the ones that seem appropriate to the citizenry. There are a number of things that we could do to make the United States or any community more secure that we nonetheless would think are wholly inappropriate. We would never dream of putting wiretaps in every room or stationing a police officer inside everybody’s home. Where the line is exactly is a matter for the community to decide, and that is the most important point.

Milgram: Where does the Constitution come in?

Friedman: It is the backstop if democracy goes awry, protecting fundamental rights. But still, what we forget too easily is that how policing happens is, in the first instance, a question for the people.

Milgram: I come from a long line of police officers, and I have overseen the Camden Police Department, and I think what my grandfather and a lot of the Camden officers would say is “We have special knowledge.”

Friedman: You’re right. Law enforcement has specialized expertise, just like the head of the school board, the head of the Environmental Protection Agency, the head of any workplace safety agency. We need that specialized expertise to make us safe. The model that is used throughout the rest of government is that the experts come up with options, and they go to the public and they say “Here’s what we’re thinking of doing.” And the public most of the time says “Yes” or “How about changing it a little bit?” or, on some occasions, says “No.” If policing were to use this model, then all of the issues we hear about legitimacy and trust would begin to evaporate because you can always say “But this is what the public wanted.”

Milgram: Give me one example of that.

Friedman: [Camden Police Chief] Scott Thomson made the decision to roll out his body camera policy provisionally and then engage in widespread community engagement around what the policy should look like. We conducted that engagement and prepared a report. He read it and changed the policy in ways that he felt improved it. And having seen what we did in Camden, the NYPD asked us to do the same.

Milgram: Give me an example of another aspect of government where this model of more democratic and public involvement does work.

Friedman: It’s everything from zoning boards, school boards, environmental protection—at every level of state and local government. Though the models are different, it is universally the case that rules orregulations are proposed; there is an opportunity for the public to comment, and then there is a final decision. The requirements of administrative government are that the experts listen and that they respond by explaining why they’ve chosen the course that they’ve chosen. And that’s what we did in Camden, which is an example of democracy at retail—of the public weighing in on a specific policing policy. We wrote a report and told the police chief what the public thought, and the chief’s response was to adopt perhaps 50 percent of it and reject perhaps 50 percent of it, but point by point explaining why he went one way or the other.

Milgram: So you have got all these different projects, and to you it all falls under the rubric of governance. Tell me about that.

Friedman: We’re living in a world in which there are protests in the streets about policing. Everywhere in government, if people have a problem, there’s somewhere to go: There’s plumbing to connect the voice of the people to the agency. And it may get clogged, it may not work perfectly, but there’s something there. But, in policing, precisely what we’re missing is that mechanism to connect the public to the agencies. And that’s why when people have a gripe, they file lawsuits against police departments. But that’s terrible plumbing, filing lawsuits; it’s slow and expensive, and nobody thinks it’s the right answer.

Milgram: I think you’ve made what is a really unique and interesting decision to work within the establishment. Tell us some of the places you’re working with now; you’ve got a long list, I think.

Friedman: If you can work from within, you can effect change relatively quickly. What is actually remarkable about policing and is consistent with some of people’s complaints as well, is that chiefs have aterrific amount of power. So to the extent that we have found chiefs—and we have found many—who see a problem and want to change it, they can do it. And so we are working with chiefs in Tampa; Tucson; Hayward, California; Burlington, Vermont; and in Camden, New Jersey. We are working a bit with the NYPD, and we are working with the federal monitor in Cleveland.

Milgram: What surprised you when you went to these communities? What did you learn or see firsthand that you wouldn’t have expected?

Friedman: Our largest problem in this space is that the police and everyone else speak two completely different languages. And I have truly come to believe that if we can bridge that linguistic gap, we can make an awful lot of progress.

Milgram:  I think if you read the papers, you would think the public and the police are far apart in terms of community engagement, and it seems to me that you’re actually finding something very different: that the police are open to hearing, and the public wants to be heard—is that right?

Friedman: Yes, it’s absolutely right. Cops live on the street. That’s what policing is. And any cop worth his or her salt, I don’t care at what level, must prefer to have a good relationship with the community that they are in. So the trick is figuring out how to bring communities and the police together while preserving what is important to both of them.

Milgram: So for NYU Law students who care about policing and communities, how do they work with you and for the Policing Project?

Friedman: Law students take a Policing Project seminar and work as externs with the Policing Project and our partner organizations. We bring them to meetings; they get on the phone and hold conference calls with policing officials all over the country; they design programs—every project that we’re doing is designed by the students and vetted in a group—and they call on subject matter experts. I have two things I want to say about the students: They have knocked me off my feet on more than one occasion with their go-all-night-long dedication, and they are tangibly changing the world.

Milgram: I remember this now from the meeting; they gave presentations on suggested rules to the police chiefs that were assembled, who included three or four of the members of the President’s Task Force on 21st Century Policing. It was a very illustrious group of people. Students got to pitch…was it their own rules?

Friedman: It was a really profound moment for the students, and what is remarkable is the number of police officials who have on more than one occasion brought that day up to me, including saying that they listened to the students’ proposals and at first thought they were, and I quote, “crazy,” but have now come to believe that the students were right.

Milgram: Give me an example.

Friedman: It was a very funny moment because we’d spent two days really bonding with these policing officials and creating credibility, and then in marched our students, and the first presentation was on consent searches. The students explained their rule, which was extremely restrictive of consent searches—in which a person might be asked to waive his or her Fourth Amendment rights. The evidence is that in most cases people don’t really feel like they have a choice to say no. That was a policy that one of the chiefs told me later she thought was crazy but wasn’t sure any longer and wanted to consult with her colleagues in law enforcement who don’t use consent searches to the same extent.

Milgram: What’s your dream? In a year, three years, five years, where do you see this?

Friedman: If we can keep the momentum that we’ve got and we can get the funding, I could see a team helping jurisdictions all over the country transform themselves, working closely with their communities. If you had asked me this question a year ago, I might have chuckled at you, and now I worry that I’m underestimating, because the need is so great and the desire is so high and the possibilities are so terrific that we just need to do it.