On September 11, US Senator Sheldon Whitehouse of Rhode Island capped off the inaugural conference of the Civil Jury Project at NYU School of Law with a potent entreaty to preserve the civil jury trial as a pillar of the American democratic system. 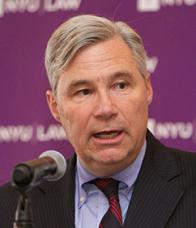 Since 2005, the rate of federal cases resolved by juries has been below one percent, down from just over 5.5 percent in 1962. After a morning that gathered professors and judges to examine the civil trial in various lights, including constitutional intent and the context provided by empirical studies, Whitehouse’s keynote was direct and incisive: “The jury is intended to be a thorn in the side of the powerful and wealthy. It is intended to make the powerful and wealthy stand annoyingly equal before the law with everyone else.”

Whitehouse, who has served as both US attorney and attorney general in Rhode Island, drew on his intimate knowledge of the US legal system and his own firsthand experience of working in the public sphere as he expounded on the civil jury trial’s virtues, including guarding against fixed cases, protecting against judicial autocracy, bringing Americans of diverse backgrounds together, and providing a civic education. He criticized the Supreme Court for making “pro-corporate” decisions that have expanded mandatory binding arbitration, made it more difficult to jointly seek redress via class action, and limited the jury’s ability to impose punitive damages—decisions that, he said, have ultimately “choked off access to the jury.”

Above all, he stressed the civil jury trial’s potential to rectify some of the excesses in today’s post-Citizens United political climate, a purpose set down in the writings of Alexander Hamilton, William Blackstone, and other major political and legal thinkers.

“That tide of special interest money and influence comes to a crashing stop at the jury box. There, the merits of the case dictate the jury’s decision,” he said. “There, even the mighty corporation must stand equal before the law, even with the humble citizen it has injured.”

The Civil Jury Project, established this summer under executive director and trial attorney Stephen Susman, examines the civil jury trial and the repercussions of its decline for the legal system and society at large.

“It is my hope that the Civil Jury Project will highlight this vital constitutional role of the civil jury trial,” Whitehouse said, “and preserve and enhance the jury as an element of the uniquely American system of self-governance.”

View the full playlist of videos from the Civil Jury Project conference.