On September 23, Pennsylvania’s attorney general, Josh Shapiro, delivered the 23rd annual Attorney General Robert Abrams Public Service Lecture. Among other topics, Shapiro discussed the release of a 2018 grand jury report from his office that alleged the abuse of more than 1,000 children by over 300 priests across Pennsylvania.  According to former New York Attorney General Robert Abrams '63, who introduced Shapiro and for whom the lecture is named, the report has been credited with prompting similar investigations into abuse across the United States. 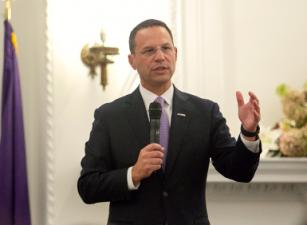 “What has changed in this country as a result of our [grand jury report] is that survivors are now being listened to. The prosecutors are understanding, you’ve got to prosecute these cases of sexual abuse and sexual violence. And I’m proud of the fact that Pennsylvania took the lead on that issue.”

“I believe that there is no better, more significant job in public service today where you can defend the rule of law, where you can make those contributions, then to serve as a state attorney general. And that’s what I’ve tried to do in my time as AG—making sure that the rule of law applies to everyone, no matter what they look like or where they come from or who they love or who they pray to or choose not to pray to. The rule of law must apply to everyone. And when we create others in our system, when we separate people out, when we apply the laws unfairly we erode our democracy, we erode the rule of law, and we make everyone less safe. We make everyone weaker.”