Sainath Iyer ’18 says he’s not surprised that Professor of Clinical Law Kim Taylor-Thompson is one of the six faculty members at New York University selected to receive a Distinguished Teaching Award for 2017-18. 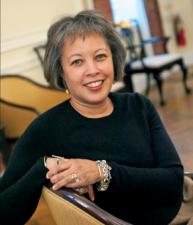 “I don’t think any of her students would be surprised by her receiving the award,” says Iyer, who has taken both doctrinal and clinical courses with Taylor-Thompson, and has worked as her research assistant. “She is just beloved here,” says Renata O’Donnell ’19, who has also taken multiple courses with Taylor-Thompson. Candidates for the Distinguished Teaching Award are nominated by current students or alumni.

Taylor-Thompson, who joined the NYU Law faculty in 1997 from Stanford Law School, teaches Criminal Law and is co-director of the Criminal Defense and Reentry Clinic with her husband, Professor of Clinical Law Anthony Thompson. Her students call her “KTT” and praise her for her accessibility and the mentoring she does. “She always makes time to see students in any context,” says O’Donnell. Taylor-Thompson also draws on her decade of experience as a public defender in Washington, DC, to bring a practitioner’s perspective to the classroom, students say.

“Kim motivates her students to be empathetic and to do good; and Kim’s own experiences and achievements serve as their own beacon of inspiration for those she teaches,” Dean Trevor Morrison wrote in a letter supporting Taylor-Thompson’s nomination for the award. “Even Kim’s colleagues continuously learn from her,” he added, referring to a letter from another NYU Law professor who “acknowledges that Kim’s teaching is the best he has ever seen, and that he himself learns how to be a better teacher from watching her.”

Maryam Adamu ’19, who describes Taylor-Thompson’s teaching as “empowering,” says that Taylor-Thompson encourages students to consider the real-world impact of law on individuals. “She’s able to walk the line of… presenting it in a way that’s true to history and true to life,” says Adamu. “It’s such a delicate way of working through the issues that’s sort of unique.”

“There was more participation in that [Criminal Law] class than in any other I had 1L year,” says Devika M. Balaram ’19. Instead of cold-calling on students, she says, Taylor-Thompson might designate half the class as prosecutors, half as defense attorneys, and then ask each side to respond to a hypothetical. Balaram, a former teacher, says such role-playing was “very freeing” for many students. “She does so much to set up an environment that allows people to take risks and allows people to learn.”

This award is not the first time Taylor-Thompson has been recognized for her pedagogy. In 2012 she received another university-wide honor, the Martin Luther King Jr. Faculty Award, which recognizes scholarship, research, and teaching in the spirit of the civil rights leader. The following year NYU Law selected her for the Podell Distinguished Teaching Award.

The Age of Criminality: Kim Taylor-Thompson advocates for a bright-line rule to keep juvenile offenders out of adult courts
NYU Law website 1/12/16