On August 11, Wendy Scott ’80 began her tenure as the new dean of Mississippi College School of Law. As MC Law’s first African-American dean, she brings a compelling teaching and administrative background, as well as a deep faith and history of supporting the Baptist community, to the college, which is affiliated with the Mississippi Baptist Convention. 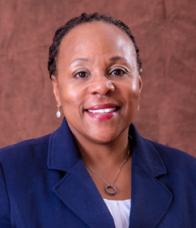 Starting in 2006, Scott taught at North Carolina Central School of Law, where she served as associate dean for academic affairs from 2009 to 2012. Before that, she taught at Tulane Law School in New Orleans for 17 years and served as vice dean for academic affairs. She has also been an adjunct professor at Hunter College, Brooklyn Law School, and CUNY Law School. Her scholarship focuses on constitutional theory and school desegregation.

Earlier in her career, she served as a staff attorney at the Legal Action Center of the City of New York and worked as an associate at Vladeck, Waldman, Elias & Engelhard.

“Professor Scott brings a lifetime of exceptional service to the position, having distinguished herself as a lawyer, teacher, legal scholar and administrator,” said MC President Lee Royce in a press release. “We are so pleased to have someone so well known and respected in the legal academy provide leadership for our law school.”