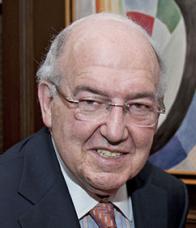 Lester Pollack ’57, chairman emeritus of the NYU School of Law Foundation Board of Trustees, passed away on December 9 after a prolonged illness. For decades, Pollack was among the Law School’s most dedicated and visionary leaders.

Pollack’s generosity exemplified his commitment to the Law School and its mission. He was integral to the creation of the Law School’s endowment in the 1970s, and later served as chair of the Law School’s Board of Trustees from 1998 until 2008. He also chaired the board of the Law School’s National Center on Philanthropy and the Law, served as the director and president of the Law Alumni Association, and was a member of John Sexton’s Council on the Future of the Law School. Pollack’s remarkable commitment to the Law School led to the creation of the Pollack Center for Law & Business and to the dedication of his eponymous colloquium room on the ninth floor of Furman Hall. Pollack also was an invaluable member of the broader University community, serving as an active member on the NYU Board of Trustees from 1987 through 2013, and as a life trustee since 2013.  Over the course of many years, he received numerous accolades for his professional achievements and contributions to NYU, including the Vanderbilt Medal, Edward Weinfeld Award, Alumni Meritorious Service Award, and Albert Gallatin Medal.

"NYU Law could not have gained the stature it enjoys today without Lester's wisdom and commitment over many years," says Dean Trevor Morrison. "He was truly a great man, and we will miss him deeply."

“The Law School lost one of its transformational leaders," says Richard Revesz, Lawrence King Professor of Law, who was dean of the Law School from 2002 to 2013. "Lester had founding father status as a result of his role in designing the Law School’s modern governance structure in the 1970s. His imprint is now everywhere: in the Pollack Center, which so interested him; in the Pollack Colloquium Room, where some of our most important conversations take place; and in the values and perspectives of those of us who had the privilege to know him well and to work with him closely. I lost an important mentor and good friend. I’ll miss him greatly.”

Pollack earned his bachelor’s degree from Brooklyn College. After graduating from the Law School in 1957, he practiced law at Booth, Lipton & Lipton, becoming a partner. Pollack then joined Preston and Laurence Tisch at the Loews Corporation, where he rose to become executive vice president. After leaving Loews, he worked as vice chairman and co-chief operating officer of the United Brands Company and as a partner at Oppenheimer & Company. He later co-founded Odyssey Partners in 1982, and founded Centre Partners Management, a private equity firm, in 1986. At the time of his death, Pollack was chairman emeritus of Centre Partners. In addition, Pollack was a director of numerous corporations, including Bank Leumi USA, Loews Corporation, Paramount Communications, Polaroid, SunAmerica, and Tidewater, and was director emeritus of US Bancorp.

Pollack was also a philanthropist and humanitarian. He was deeply involved with Jewish community organizations, including as chair of the Conference of Presidents of Major American Jewish Organizations, president of the Jewish Community Relations Council of New York, chair of the Associated YM-YWHAs of Greater New York, and honorary chair of the Anti-Defamation League.  He was also a director of the United Way of Tri-State and chair of the Morocco-US Council on Trade.

Pollack is survived by his wife of nearly 60 years, Geri Pollack; their children Bruce Pollack and Wendy Isaacs; their daughter-in-law Susan Pollack; and five grandchildren.

"Lester Pollack: An Illustrious Record of Leadership"
The Law School, 2008

"Center for Law and Business Dedicated to Lester Pollack '57"
The Law School, 2006

"Recognition from the Top"
The Law School, 2005