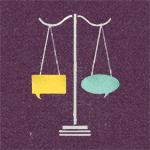 Ayo Osobamiro ’23 and Rosamond Kopczynski ’23 prepared the moot problem, which was edited by Marden executive editors Julia Bruce ’22 and Graham Ellis ’22. In the case, the US Department of Labor brought a civil suit against the Church of YouthExistence, alleging that the long hours worked by a 15-year-old camp counselor at the church’s summer retreat constituted a violation of the Fair Labor Standards Act’s (FLSA) child labor provisions. The church, in turn, argued that the counselor was employed by the campgrounds and not by the church, and also that she was a church “minister,” so the ministerial exception precluding liability in employment matters should apply.

After careful deliberation, the panel of judges named Zavadski as the best oral advocate before offering praise to all four finalists. “I wish all the lawyers who appeared in front of us were as good,” said Fletcher. “I used to hear that when I was in law school and I didn’t believe it, but you’d better believe it…. The four of you would stand up with the best of them.” Gregory added: “The four of you showed why New York University is one of the top university law schools in the country. You certainly acquitted yourself well in that regard.”

Watch the video of the event: