At Madison Lecture, Judge Rosemary Barkett criticizes the US for failing to protect the human rights of women and children

At the October 22 Madison Lecture, Judge Rosemary Barkett of the Iran-United States Claims Tribunal at the Hague argued that American courts lag far behind their international and foreign peers with regards to protecting women and children’s human rights. In her lecture “Bringing Human Rights Home? I Thought They Were Already Here,” she used the tragic case of Castle Rock v. Gonzales (2005), which reached both the US Supreme Court and the Inter-American Commission on Human Rights (IACHR), to compare and contrast how those rights are championed (or not). 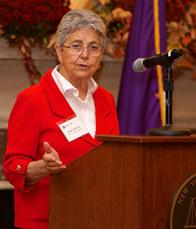 Although all United Nations members have ratified at least one of the major human rights treaties, Barkett said, the handling of gender violence and domestic abuse remains an area of stark difference among the nations. “That we in the United States have a history of arbitrarily failing to adequately respond to victims of gender violence, whether in a domestic setting or outside of it, has been continually documented.” She went on, “This arbitrary disparity of treatment is most pronounced in cases of domestic abuse, where government actors, even with actual knowledge of a specific risk, overlook or ignore crimes of violence simply because the victim was related to or in a relationship with the perpetrator.”

In Castle Rock, Colorado resident Jessica Gonzales (now Lenahan) claimed that the city was liable for a violation of her human and constitutional rights when its police officers did not enforce a restraining order against her husband. Though that order specified that Simon Gonzales must be arrested if he were to violate it, the police ignored Lenahan’s calls about repeated violations. In June 1999, Simon kidnapped their three daughters and shortly afterward died in a gunfight with police, who would discover the bodies of all three girls in his vehicle.

Lenahan’s case, which made its way to the Supreme Court, was ultimately dismissed. The court held that Lenahan had no right to expect police protection, despite the language used in the restraining order. The right of the police to exercise discretion in their tasks outweighed her need for protection.

Barkett scoffed at this. “Unfettered discretion, as we have seen over and over again, provides the opportunity for arbitrary and corrupt action.” In her view, the court erroneously viewed the case in the context of the need for police discretion rather than the context of gender discrimination. Permitting the arbitrary inaction of the Castle Rock Police Department—and similar government inaction in the related case DeShaney v. Winnebago County (1989), which involved an abused child—amounted to a perpetuation of discrimination against women and children.

When Lenahan brought her claim to the IACHR, the commission took into account how the history of gender discrimination in the US curtails women’s rights and held that a state must do what it can to prevent and respond to gender violence, as well as provide a remedy by “ending the violating act, punishing the actor, and restoring the victim.”

Barkett urged US courts to consider the reasoning of international judiciary bodies in recognizing that domestic violence is, as Lenahan argued, a violation of human and constitutional rights and that its victims are entitled to a remedy.