Professor of Law and Public Policy Lily Batchelder was recently recognized by Tax Notes and Forbes on their respective annual lists of “tax people” to watch for her scholarship on tax and her social media presence. 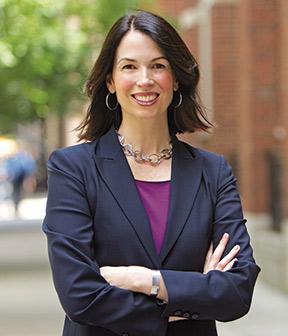 After reviewing President-elect Donald Trump’s tax plan while the then-candidate was on the campaign trail last year, Batchelder decided to investigate Trump’s claims that his plan would benefit the middle class. Her research found that Trump’s proposals would in fact raise taxes on more than half of single parents, while modestly cutting taxes for other middle-class Americans. Her findings were reported by a number of news outlets, including  USA Today  and the Washington Post. PolitiFact, the Pulitzer Prize–winning fact-checking site, also used Batchelder’s study to vet Democratic presidential nominee Hillary Clinton’s comments about Trump’s tax plan in the first presidential debate.

Due to the press coverage and scale of the study’s implications, Batchelder was named runner-up for the Tax Notes 2016 Tax Person of the Year. The award went to Trump himself, whose tax returns were a frequent point of discussion during the campaign and whose platform included the promise of cutting taxes across the board and simplifying the tax code. Tax Notes praised Batchelder for her contributions to the overall debate surrounding Trump’s tax plan.

Forbes also included Batchelder on their list of “100 Must-Follow Tax Twitter Accounts for 2017,” which consisted of tax professors, CFOs, tax organizations, tax writers, and others in what the magazine described as a “virtual cocktail party” of experts. Batchelder regularly tweets commentary on tax and politics at @lilybatch.

From 2010 to 2015 Batchelder was on leave from NYU Law, working for the Obama administration as deputy assistant to the president and deputy director of the National Economic Council. Prior to serving in those roles, she was majority chief tax counsel for the US Senate Committee on Finance.