Lighting Up the Night

NYU Law kicked off its $450 million Lead the Way campaign with a gala evening at the American Museum of Natural History that celebrated both donors and the students they support.

The contagious energy of the evening was clear from the moment students, alumni, and friends of NYU School of Law began streaming through the violet-lit archway of the American Museum of Natural History. Held to kick off the Law School’s historic Lead the Way campaign to raise $450 million, the October 16, 2017, event also served to showcase the strength of the community. This year, the Law School combined the annual Weinfeld Gala—which celebrates the Law School’s most dedicated supporters—with the yearly reception that brings together the recipients of student scholarships and the donors who support them. Some 850 members of the Law School community assembled under the museum’s life-size blue whale replica (violet for the evening) to celebrate the value of giving back to an institution that enables its graduates to make a positive impact on the world.

The entire evening underscored the Law School’s priorities of engaging with substantial issues through meaningful scholarship, public service, and advocacy; further strengthening its interdisciplinary programs and activities to create a learning environment that fosters technological and intellectual innovation; and making significant investment in students—providing them with not only the financial resources to pursue an excellent legal education but also the additional support services to enable them to thrive.

New York University President Andrew Hamilton opened the evening’s remarks by expressing his pride in the Law School, followed by Campaign Co-Chair David A. Tanner ’84, who introduced Dean Trevor Morrison. Morrison emphasized both the ambitious nature of the campaign and the Law School community’s commitment to it. As of that evening, $253 million, or more than half the total goal, had already been raised toward the campaign. Morrison also noted some of the steps the school has taken in service of its strategic plan, announced last year, which commits the Law School to leadership and innovation in legal education, diversity and inclusion, and student success. 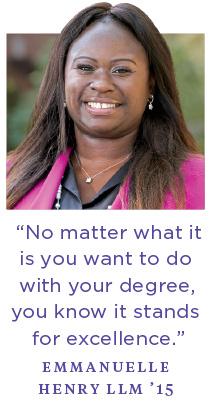 Applause broke out as Morrison asked current scholarship recipients to stand, then alumni who had received scholarships when they were students—many of whom are now donors to the Law School. By the time he asked the remaining current donors to join them, nearly all in the room were on their feet, illustrating a virtuous cycle. “Over the years,” he said, “our community has thrived because of the people in this room, and because of those before you. It will continue thriving because of those after you.”

The dean singled out Anthony Welters ’77, chair of the Law School’s Board of Trustees and this year’s  Judge Edward Weinfeld Award recipient, as an example of that service. Increasing scholarship aid for students is a key goal of the campaign, to ensure a community enriched by varied backgrounds and perspectives, less financial strain on students, and freer choice for graduates in their careers. Morrison noted this and thanked the crowd, saying, “As we launch our Lead the Way campaign, we can think of no better way to make a strong case for supporting NYU School of Law than the talented, engaged, passionate, bright, and energetic students who have received critical financial aid and scholarships because of you.”

A video shown after Morrison’s remarks allowed students and recent graduates to bolster that case in their own words. Many of those featured were in the room; applause greeted their on-screen appearances. One of them, Furman Public Policy scholar Riane Harper ’17, was introduced by Campaign Co-Chair John M. Desmarais ’88 and shared warm anecdotes about her benefactor, the late Jay Furman ’71, whom she held up as an example for current and future supporters.

And Harper drove directly to the heart of the campaign’s purpose: “[E]very donor should know that they are giving more than money when they contribute to a scholarship. They are also giving a gift of faith. When law school gets hard, as it inevitably does, it helps so much to know that someone, somewhere, has a vested interest in your success. Scholarships assure students that even if they are not always sure of themselves, others see their promise and are willing to foster it. The scholars we saw in the video tonight are committed to public interest, scholarship, and innovation. They are models of academic merit and leadership. Those are more than just descriptions of a lower tuition bill. They are the values of NYU Law. NYU is full of good people taking a risk for the chance to be their best selves because someone who came before took the time to look back and say, ‘I want to support you.’ Those donors made NYU Law a home for me, and I am here tonight to say thank you so much for believing in what we can become.”

Next, Campaign Co-Chair Elana B. Wilf Tanzman ’12 introduced Damaris Hernández ’07, who came to NYU Law through the AnBryce Scholarship Program founded by Welters and his wife, Ambassador Beatrice Wilkinson Welters. Hernández recalled what it meant to her just to interview for the program, which is designed for those who have faced challenging circumstances and are among the first in their families to pursue a graduate degree. AnBryce supported her through law school, she said, and helped open doors to places she never thought she would go. Today, Hernández is a partner at Cravath, Swaine & Moore.

Welters accepted the Weinfeld Award to an ovation. In his remarks, he underscored the close-knit AnBryce community’s continued commitment to all of its members.

Assistant Dean for Development and Alumni Relations Nick Vagelatos ended by echoing a common theme of the evening: The impact of the NYU Law community extends well beyond its members. Of the students, he said, “They came here to change the world, fight the good fight, uphold the rule of law, and lead the way.”

Many donors and students lingered at their tables; the lobby was dotted with small groups continuing their conversations. One student turned for a last look. Making a gesture that swept the space, she neatly captured the spirit of the evening: “This is awesome.”

Sidebar: By the Numbers

The Law School launched the campaign with $253 million already raised toward its $450 million goal.