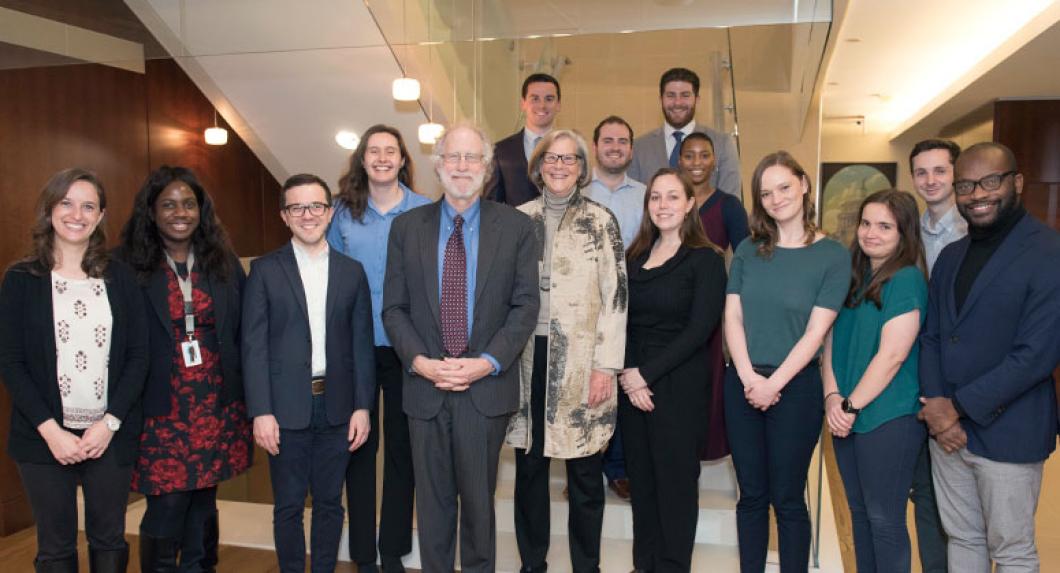 Imagine you are a member of Congress meeting with a constituent, who talks to you about the public policy reasons for supporting a particular bill. She also says: “I really appreciate your attention to this. It’s important to me and, as you know, I raised $50,000 for you several months ago.”

“What do you do?” asked Professor of Practice Bob Bauer, presenting this hypothetical in late November to a group of NYU Law students in a conference room less than two miles from the US Capitol. Members of the Legislative and Regulatory Process Clinic, the students were spending the fall semester in Washington, DC, to gain firsthand experience with government law practice.

“By the way, I’m not just making this up,” Bauer added. “Sometimes this happens—the donor is on the way out the door and says something to the chief of staff.”

Bauer and Professor of Practice Sally Katzen are co-directors of the clinic. Longtime Washington insiders, they tap into their deep Capitol connections to arrange students’ fieldwork placements—externships in federal government offices or at government-focused nonprofits. The students spend most of each week at their respective placements, but for three hours each Wednesday evening, they converge in downtown Washington for the seminar portion of the class. The gathering has the feel of a family meal. A buffet dinner is served, and Katzen and Bauer, seated at the head of a long conference table, preside over a conversation that is part class, part debrief, and part breaking-news discussion.

Syllabus topics for the seminar include “How the President’s Budget is Prepared,” “Congressional Oversight,” and “The Lobbying Business.” The topic on November 27 was “Ethics and Transparency.” That’s when Bauer presented the hypothetical involving the member of Congress and a constituent. As is typical in a law school class, the hypothetical kept changing. What if the constituent ties the issue she’s lobbying for to future fundraising? “You may have to say, ‘That’s not going to happen,’” Bauer said. “You have to create separation and make sure it’s documented, because it’s very dangerous.”

Katzen and Bauer invite guests from various parts of Washington’s legal and policy ecosystem to co-teach some classes. “At one seminar, we had the opportunity to talk about the legislative effort behind the passage of the Affordable Care Act with the individual who spearheaded the effort to get the legislation passed,” recalls Joshua Fattal ’18, who took the clinic in fall 2017. “Where else would one get that kind of opportunity?” He adds: “Also, it was taco night, which is one of the seminar's best dinner menus.”

While fieldwork placements give clinic students a close-up view of Washington practice in their respective offices, the Wednesday gatherings offer a bigger-picture perspective. Much of that comes during student presentations on non-confidential aspects of their externships. Aaron Salerno ’20 worked for then-Securities and Exchange Commission (SEC) Commissioner Robert Jackson Jr., drafting comments on proposed agency rules, preparing Jackson for a congressional hearing, and writing talking points for Jackson and staffing his public appearances. “One of the great things about working for an SEC commissioner is the broad portfolio of things we work on,” Salerno says. “It was exceptionally unusual for any two days to be the same.” (Jackson, who was on public service leave from his position as professor of law at NYU Law, is due to return to the Law School in mid-February.)

At his seminar presentation on November 27, Salerno began with an overview of an SEC org chart, and then offered observations on the political dynamics among the five commissioners, as well as some nonpolitical assessments. (Commissioner Allison Lee is “very cool,” he said, noting that she listens to rapper Cardi B.) Katzen and Bauer chimed in with their own commentary, and Salerno’s fellow students asked numerous questions. Some were specific to the SEC and others cut across government practice, such as how their respective agencies handle cost-benefit analysis. Melanie English ’20, whose placement was in the general counsel’s office at the US Department of Transportation, mentioned that people there have been told to call it “benefit-cost” analysis.

NYU Law began offering the DC clinic in 2013, after a strategy committee of the school’s board of trustees recommended adding an “intensive Washington, DC-based study-and practice program” to the curriculum. “The dichotomy that law schools have traditionally drawn between public law and private law is highly misleading,” the committee stated in a report, adding, “Virtually all legal arrangements are affected by government regulation, and the business model of many companies depends heavily on government actions and programs.” Study of and practical training in the role of government, the report said, “is relevant to multiple career paths.” The clinic takes a maximum of 15 students and is open only to 3Ls.

“What makes the clinic somewhat unique,” says Fattal, “is that it is run by two giants in the legal policy space, who bring their decades of knowledge and experience, and connections across town, to enhance students’ experience.” Bauer was a partner at Perkins Coie in Washington, where he founded the firm’s political law practice, which he chaired for 28 years. He also served as general counsel to the Obama for America campaign and, from 2010-2011, as White House Counsel to President Barack Obama, who named Bauer co-chair of the Presidential Commission on Election Administration in 2013. Katzen was a partner at the firm that is now WilmerHale in Washington, specializing in regulatory and legislative matters. She served in the Clinton administration as administrator of the Office of Information and Regulatory Affairs in the Office of Management and Budget (OMB), as deputy assistant to the president for economic policy and deputy director of the National Economic Council in the White House, and then as the deputy director for management at OMB. (Both are also distinguished scholars in residence at the Law School).

When possible in arranging placements, Bauer and Katzen try to factor in expressed interests of the students. And, Katzen emphasizes, “We look for places that will provide substantive work, with supervisors willing and able to monitor assignments, provide feedback, and serve as mentors. We want our students to serve as full-fledged members of their legal teams.”

That was the experience of Jack Shaked ’20, who says he signed up for the clinic because he wanted hands-on experience as a government lawyer, in particular on issues of international law. His placement was in the international affairs unit of the US Department of Defense’s Office of the General Counsel, where his assignments included reviewing bilateral treaty negotiations and writing memos assessing how cyber operations fit into current and developing public international law. “I was pleasantly surprised by how much I was integrated into the work of the office as an equal member of the team,” Shaked says.

“As a lynchpin in the policy process, government lawyers have to sometimes navigate between the law and policy ends of their clients,” Shaked adds. “Seeing this in action was an invaluable experience.”

A placement with the majority staff of House Permanent Select Committee on Intelligence took an unexpected turn for Ariana Rowberry ’20 in late September, when the committee began its formal impeachment inquiry into President Donald Trump. As depositions and hearings proceeded during the fall, Rowberry says, she helped organize the evidentiary record and draft the inquiry report. “From day one,” says Rowberry, “staff members treated me as a full-fledged member of the team.” Indeed, Rowberry is listed as an investigative staffer on the HPSCI’s impeachment report.

Rebecca Scaife ’20 , a former teacher and school district manager, externed at the Urban Institute, a public policy think tank. She got a firsthand look at how research and data shape decisions on education policy by participating in the Urban Institute’s analysis of Higher Education Act reauthorization proposals and through the education-data training that the institute offered for Hill staffers.

Overall, Scaife says, the clinic gave her a deeper understanding of what policy work means and helped her realize “that I am interested in being more of a policymaker and advocate, because I have strong beliefs about education and civil rights that I want to be codified into policy.”

To be in Washington means being at the epicenter of US political news, and Katzen and Bauer include a “Current Events Corner” at each seminar. On November 27, the conversation moves from the impeachment investigation to the 2020 presidential campaign to other developments. In fact, the rush of headlines has been so intense that, Bauer comments, “Current Events Corner has a way of becoming more than a corner—it is more like the living room.”

Although they don’t have exact figures, Bauer and Katzen say that a significant percentage of DC clinic alumni take jobs in government-related practice, either directly with a government agency or in private-sector firms and nonprofits.

Fattal was an ASPIRE scholar at NYU Law, combining study of law and cybersecurity, and his clinic placement was in a cyber law group within the US Department of Homeland Security (DHS). Following graduation, he spent a year as an attorney advisor in the Intelligence Law Division of DHS’s general counsel’s office, before beginning a clerkship in US District Court for the Southern District of New York. Of his clinic experience, Fattal says, “The connections and friendships I made while working as an extern have lasted to this day, and I know will help me throughout my career.”

Hillary Smith ’17, says taking the clinic “solidified my desire to work in DC because of the variety of professional opportunities there, both in public service and the private sector.” Her clinic placement was in the Office of the White House Counsel; following two federal court clerkships, she is currently a litigation associate at WilmerHale in Washington.

“I thought carefully about doing the clinic, because I really loved my academic classes and wondered if spending a semester away was the best use of my time,” says Smith. “I definitely feel that it was the right choice.”