The Black Lives Matter movement has brought attention to the peril that many blacks feel in the United States, and a 2009 study by the Pew Research Center similarly showed that 55 percent of Hispanics in the US also are not confident that police offers will treat them fairly. At the March 9 Latinos in the Law Lecture, Jenny Rivera ’85, associate judge of the New York State Court of Appeals, shared a history of Latino civil rights victories to express her optimism in using the law to chart a more secure future. 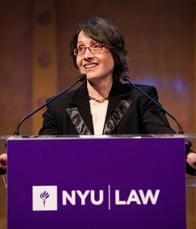 “I continue to believe that the numbers and these perceptions of our justice system can be changed within our lifetime,” Rivera said.

Rivera, who as a professor of law founded CUNY School of Law’s Center on Latino and Latina Rights and Equality, highlighted a sampling of civil rights cases. Years before the 1954 Brown v. Board of Education decision, for example, the judgment of the US Court of Appeals for the Ninth Circuit in Mendez v. Westminster (1946) led to the official desegregation of public schools in California, which had discriminated against children of Mexican heritage. In Katzenbach v. Morgan (1966), the Supreme Court ruled that New York could not deny Puerto Ricans the right to vote based on failure to pass an English literacy exam. And in Plyler v. Doe (1982), the Supreme Court ruled that the children of undocumented parents have the right to an education.

“That is not to say that Latino students or students of color cannot learn in a school that is majority black or Latino,” Rivera said. The point, she said, is that the offerings and opportunities available in segregated environments typically don’t match up to nonsegregated environments. She also noted that Latinos make up only four percent of the legal profession, despite constituting 17 percent of the US population. One negative outcome of this lack of representation in schools and the legal profession is that this “means many white students do not interact with a person of color until they are adults. Many of their ideas of who a Latino is, who an African American is, have already been shaped, and you and I are working against some very negative stereotypes at that point.”

The annual lecture is hosted by the Latino Rights Scholars Program, which provides full-tuition scholarships to two students interested in pursuing careers promoting justice for the Latino community. With Latinos on track to make up one in three Americans by 2050, Rivera urged the largely Latino audience to remember its history: “It is up to all of us, whether we are members of the legal profession or not, to ensure that that legacy is indeed fulfilled and remembered.”