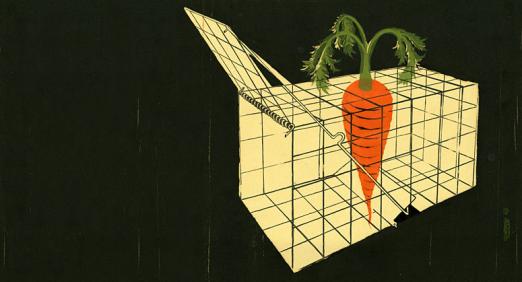 It started with a lunch conversation at a Japanese restaurant on West Third Street, and ended with a co-authored article that has prompted response from President Obama’s former budget and regulatory chiefs and been published as the lead article in the Harvard Law Review.

In the year before he joined the NYU Law faculty in Fall 2010, Ryan Bubb worked as a policy analyst for Cass Sunstein, then the “regulatory czar” for President Obama. The position gave him an insider’s view of what would become Sunstein’s legacy as head of the Office of Information and Regulatory Affairs (OIRA): The incorporation into federal policy of a form of regulation that’s known as the nudge approach, which is an attempt to preserve freedom of choice by nudging rather than mandating people to do everything from saving for retirement to using less gas and avoiding excessive credit card debt.

Richard Pildes, Sudler Family Professor of Constitutional Law, has focused his recent scholarship on such things as voting rights and national security, but he also has a deep background in regulatory law. In 1995, he and Sunstein co-authored “Reinventing the Regulatory State,” a seminal law review article on the topic, and Pildes helped develop NYU Law’s required first-year course “Legislation and the Regulatory State.” In 2008, just as the financial crisis was unfolding, he wrote a piece criticizing the nudge approach to regulation of mortgages and consumer credit products.

Over sushi in late 2012, Bubb, who was completing his PhD in economics from Harvard while working at OIRA, said that he wasn’t a fan of the approach, which is rooted in behavioral economics; Pildes said he suspected that bridging political differences, rather than social science, was driving its popularity. “It was one of these wonderful, fortuitous moments of unexpected connection that came out of nowhere,” Pildes recalls. “He had no idea that I had had some of these views, and I had no idea that he was skeptical in similar sorts of ways.”

Their resulting paper, “How Behavioral Economics Trims Its Sails and Why,” drew immense attention. Even before publication, the draft was downloaded from SSRN more than 800 times. It also received a response from Sunstein, who, with his former boss Peter Orszag, director of the Office of Management and Budget (of which OIRA is a part) during the first Obama administration, wrote a column for Bloomberg View that describes the criticism as “not a persuasive critique of nudges in general.”

Readers can judge for themselves. Bubb and Pildes attack what is often cited as the poster child of nudging’s success: the automatic enrollment approach to retirement saving. With this kind of policy, workers automatically default into their company’s savings plan, such as a 401(k), but can opt out. Previously, workers had to opt in to be enrolled. While increasing retirement savings participation, Bubb says in an interview, the policy “has actually been a stunning failure” because the overall amount saved for retirement has declined.

The reason: Most companies set the automatic default contribution at an insufficient three percent of salary and many workers who would have contributed much more under a traditional opt-in plan instead stick with the default, Bubb and Pildes write.

Nudge tools such as default only preserve “an illusion of choice that few people exercise rather than give consumers meaningful choice,” says Bubb. Further, the approach “artificially excludes” potentially more-effective regulatory mandates to achieve political consensus. The savings default rate should have been set higher, but policymakers “are afraid that might look too coercive,” Pildes says in an interview. While more research is needed, the authors write, “it might be that automatic enrollment has so far exacerbated, rather than eased, the retirement savings problem.”

Given the poor financial choices people sometimes make, the professors say in many cases the best policy could be to mandate or regulate certain actions.

Noting that the nudge approach has taken hold across a broad political spectrum, Bubb says, “My hope is that many people after reading our piece will start thinking much harder about choice-limiting policies that are arguably better able to correct the problems in many of these areas.”