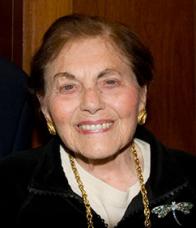 Justice Rubin had a long and distinguished legal career, much of it in public service. After graduating from Hunter College and NYU Law, she worked as a review attorney for the New York State Labor Relations Board and then as a staff attorney in the Office of the Judge Advocate General in Fort Monmouth, New York. For most of the years from 1952 to 1973, Rubin was an attorney at the firm Herzfeld & Rubin, but she periodically took leaves from the firm to work in government—as a Queens County district attorney in 1966 and an assistant corporation counsel in the New York City Law Department from 1967 to 1968.

Rubin, deeply committed to the Law School, not only contributed financially but also gave her time. She and her husband endowed the Herbert and Rose Rubin Professorship in International Law, currently held by José Alvarez, as well as the annual Herbert Rubin and Justice Rose Luttan Rubin International Law Symposium, which celebrated its 22nd anniversary this fall. In addition to serving on the Board of Trustees for many years, she was a president and an honorary director of the NYU Law Alumni Association; a member of Dean John Sexton's Council on the Future of the Law School; president of the erstwhile Law Review Alumni Association; and 1997 reunion co-chair.

In 1988, Justice Rubin and her husband were recipients of the Law Alumni Association Achievement Award; in 1992, they received the Law Alumni Association's Judge Edward Weinfield Award; and in 2003, she received the Vanderbilt Medal—the highest honor that can be bestowed on NYU Law alumni. Rubin also served in the leadership of several professional organizations, including as president of the New York State Women Judges Association; regional director of the National Association of Women Judges; and a board member of both the New York State Association of Supreme Court Justices and the Women Judges Fund for Justice.