NYU School of Law Life Trustee Norma Z. Paige ’46 passed away on June 5. Paige, a talented attorney and businessperson, was also a dedicated Law School supporter who served on the Board of Trustees for more than 20 years. After earning her bachelor’s degree from NYU in 1944 and her JD in 1946, she founded a law firm, Paige & Paige, with her husband, Samuel Paige LLM ’51. She continued to practice as a partner with the firm until 2000. 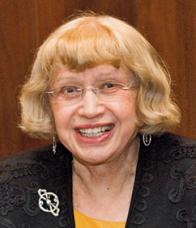 Paige also pursued a career in industry. In 1959, she co-founded Astronautics Corporation of America, a privately held company that designs, develops, and manufactures sophisticated avionics and navigation equipment and systems. Paige worked at the company, first as its vice president and later as executive vice president, through 2000; served on its board of directors from the company’s inception through 2004 and again from 2007 through 2013; and chaired the board from 1984 through 2000. She also served as executive vice president of Kearfott Corporation, a subsidiary of Astronautics, from 1988 through 2000, and as a director on its board.

Throughout her career, Paige was a steadfast member of the NYU Law community. She established the Norma Z. Paige Scholarships to support NYU Law students, and delighted in hooding her scholars each year at Convocation. She also endowed the Norma Z. Paige Professorship of Law, which was inaugurated in 2004 and is held by Professor Jennifer Arlen ’86. Paige received the Law Alumni Association’s (LAA) Alumni Achievement Award in 1991, the LAA Judge Edward Weinfeld Award in 1996, and the Arthur T. Vanderbilt Medal in 2006. She was also awarded the NYU Alumni Meritorious Service Award in 2007. Paige was a member of the New York Women’s Bar Association, serving as its president from 1958 through 1959.