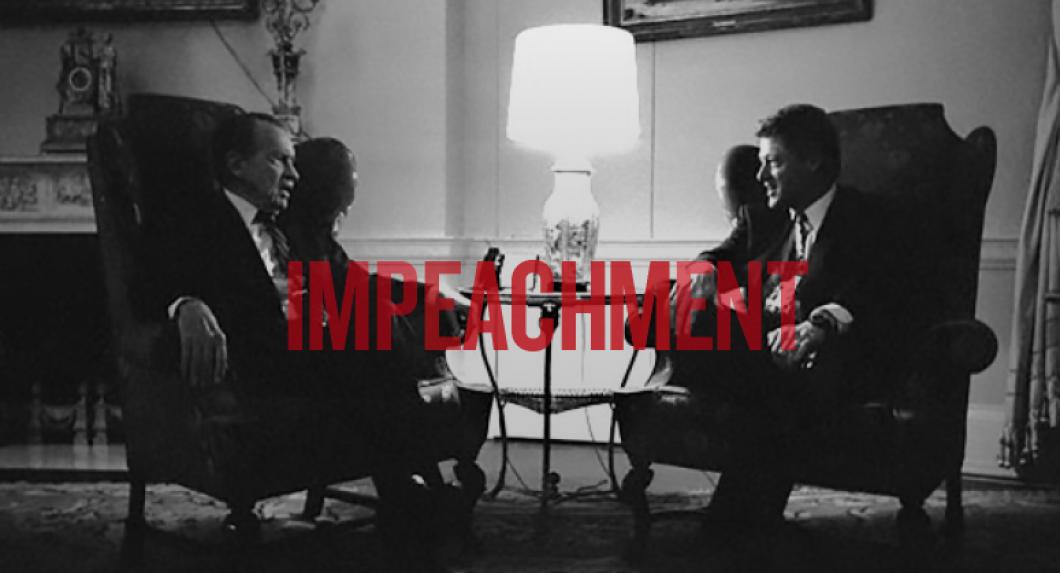 Just how dangerous and divisive is impeachment? Does removing a president from office via impeachment precipitate a constitutional crisis—or avoid one? That topic was the focus of a February 27 Latham & Watkins Forum that featured Professor of Practice and Distinguished Scholar in Residence Bob Bauer, former White House counsel in the Obama administration, and constitutional historian Keith Whittington, William Nelson Cromwell Professor of Politics at Princeton University.

The Forum, moderated by Deborah Malamud, AnBryce Professor of Law, probed the tension between the legal and political aspects of impeachment. Both Bauer and Whittington described themselves as “hawkish” on impeachment, viewing the process as a “valuable tool,” in Whittington’s words.

“We have to stop looking at impeachment as itself catastrophic, as the source of constitutional crisis,” said Bauer. “We have to look at it as a critical remedy against the harm that powerful presidents in certain kinds of misconduct…can do the country.”

The March release of US Attorney General Robert Barr’s summary of Special Counsel Robert Mueller’s long-awaited report has provided a new context for the broader impeachment conversation. As Mueller’s portion of ongoing investigations has reportedly closed without finding a knowing conspiracy between the Trump campaign and Russia to influence the 2016 presidential election, talk of impeaching President Donald Trump has cooled in some quarters. Others, calling for a release of the full Mueller report, contend that congressional and other investigations may uncover conduct that merits continued consideration of the process.

As Malamud noted, Article II, Section IV of the US Constitution allows the removal from office of the president, vice-president, and other federal officials if they are impeached and convicted of “treason, bribery, or other high crimes and misdemeanors.” Much of the Forum discussion focused on defining those terms. “Our history certainly indicates we’re not limited to indictable crimes,” Whittington said.

“I think there’s a general agreement that presidents cannot be impeached and should not be impeached because Congress happens to take a different view on a policy matter,” Bauer said. But he suggested that a president could be impeached for refusing to carry out his or her constitutional responsibilities, or for actions inconsistent with the dignity of the office—for example, conducting an Oval Office address with a Confederate flag in the background.

Whittington responded that he was reluctant to entirely rule out policy as a basis for impeachment, although only in the most extreme cases, “where…the policy disagreements are now so severe, so extreme, the consequences are so gave, that there’s actually a consensus in Congress on both sides of the aisle that you can’t tolerate that.”

Bauer said that he concurred, but pointed out that when Congress started impeachment proceedings against President Richard Nixon in 1974, potential charges involving Nixon’s policy decisions, such as the secret bombing of Cambodia, were left “on the cutting room floor.” Instead, the articles of impeachment focused largely on illegal actions that Nixon had taken against political opponents.

The impeachment of President Bill Clinton offers some lessons in how not to impeach a president, both panelists agreed. Although it’s easy to assume that evidence of criminality is the most obvious and strongest basis for impeachment, building a political case for impeachment at the same time is essential, they argued.

The House of Representatives voted in 1998 to impeach Clinton on charges of perjury and obstruction of justice, which stemmed from investigations conducted by special counsel Ken Starr, but the president was acquitted after his trial in the Senate. Polls at the time showed that a majority of American opposed removing the president from office.

Bauer, who was outside counsel to the Democratic minority in the Senate at the time of Clinton’s impeachment, said that the Republican House majority relied too heavily on Starr’s report. “The House did not call a single witness; it did not develop any independent investigative record whatsoever,” Bauer said. “It just shipped the entire Starr report, effectively, to the United States Senate.”

“I think the Republicans fell into the trap of thinking about impeachment as only justifiable on these very narrow set of circumstances, which were primarily criminal ones,” Whittington said. They viewed impeachment as a “mechanical,” legalistic proceeding, he said, “rather than understanding it fundamentally as a political process, in which you had to build the case in public about why these particular acts are so egregious and so abusive that [impeachment] is the appropriate step.”

Malamud pointed to an irony. “Congress thinks that, in the public eye, it is acting most legitimately when it treats impeachment as a kind of criminal matter,” she said. “[But] doing that approaches impeachment without the political sensitivity that gives it…legitimacy” as a constitutional process within the political branches of government.

How then, she asked the panelists, should a case for impeachment be built?

In addition to gathering evidence for Senate proceedings, Whittington said, the House should put a strong effort into making the public case for impeachment. In some cases, that would involve holding “big political hearings, precisely in order to sort of build that political support before we move over to the Senate and have a public trial,” he said.

“I think it’s particularly incumbent on the majority in the House of Representatives…to display a high degree of sobriety,” Bauer added. “That means moving…in a methodical fashion, building the case about the appropriate standards, trying to create a record amid all the political noise, and obviously, the shrieks of complaint from the opposition.”