Trump and the Constitution: An inauguration-week discussion among NYU Law experts 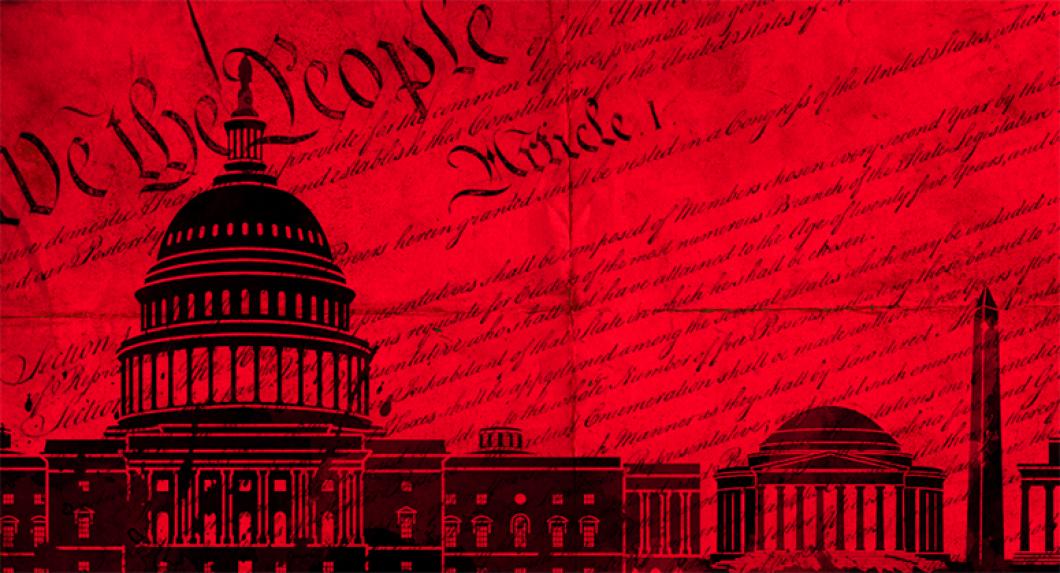 In January, anticipating a topic that would be top-of-mind for students returning from winter break, several NYU Law faculty gathered to orchestrate a panel discussion that tackled foundational legal issues that might arise during the administration of the nation’s 45th president. Throughout his campaign, with comments on use of force abroad, immigration bans and registries for Muslims, mass deportation, flag burning, and other topics, Donald Trump proposed actions and policies that have raised a range of constitutional concerns. His statements on criminal justice have also caused alarm, particularly in minority communities.

In “Emerging Constitutional Issues for the Trump Presidency,” held two days before Trump’s inauguration, the professors offered their first-take analysis of what may lie ahead. Part of the Wednesday NYU Law Forum series, it was a topic that proved salient to students as the program drew such a large audience that it had to be moved from its usual location in Greenberg Lounge to Tishman Auditorium, and most seats in Tishman were taken when the discussion began.

Presented below are excerpts of remarks from each professor (condensed and lightly edited), along with links to an unedited transcript and audio recording of each faculty member’s observations.

Presidential Authority to Engage in Use of Force
Ryan Goodman, Anne and Joel Ehrenkranz Professor of Law

I thought what I would highlight is basically kind of a challenge between what currently exists—the status quo of a congressional authorization for the Executive Branch to use force against Al  Qaeda and its associated forces—versus the president's Article II powers to use force without congressional authority, on his own terms. And I think the danger that lurks is that a Trump administration might begin to use force against new enemies—new groups that it identifies as national security threats to the United States or the same groups in new countries. So, opening up new fronts without there being sufficient democratic dialogue.

But the strange place that I find myself is that I think of the status quo as unacceptable, which is an authorization to use force that doesn't easily apply to ISIL and these other groups, versus changes that could be made to the status quo that would be even more unacceptable. The Obama White House has been operating for quite some time under the authorization that Congress passed in September of 2001 to deal with 9/11, and has applied that to the fight against the Islamic State. And that is legally dubious.

During a Trump administration, though, the changes that Congress would make, I think, could be more unacceptable. Because one of the most important aspects of a new authorization of use of military force is the idea that it would be ISIL-specific. But I think everything is up for grabs over the next four years. And I don’t think [National Security Adviser Michael] Flynn is going to ask for an ISIL-specific authorization. It'll be much more open-ended against terrorist organizations.

Other issues addressed by Goodman include incorporation of international legal constraints (on military targeting of individuals, for example) into any new authorizations for use of force and the constitutionality of detention at Guantanamo Bay. Listen to Goodman’s full remarks, or read them in the transcript.

Let's talk first about Muslim registries. Under conventional legal reasoning, this is flatly unconstitutional. I don't think it's really a close question. As long as there's some sort of hassle, and not even a penalty, but just a hassle to register, based on religious belief, that's just unconstitutional. There isn't terrific originalist history to support that proposition, but over a long period of time, building up lessons we felt have been learned, that's just unconstitutional to single out religious belief. Now, if somehow the singling out is of religiously motivated conduct, then, conventionally speaking, we apply strict scrutiny, and the government better have a very persuasive reason for singling out religiously motivated conduct. It seems impossible under orthodox analysis that that position could be sustained. It makes you wonder why anyone would propose it if they thought about it very much. And one possibility is, of course, that it's a kind of stunt or a political gambit and not really meant to be a serious proposal.

But think just a minute, leaving aside any legal issues—just thinking about policy and pragmatics. What would happen if the government asked Muslims to register? Well, religion happens to be opaque. It's something that people can express but they can also often keep hidden. And what the registry would do, I take it, is punish the conscientious. It would punish those who are willing to be honest. And those who are willing to hide, I guess, would escape. So, you would disadvantage the conscientious. And then there is a proposed form of protest by non-Muslims, who said, "We will register if you set up a registry." That creates real problems for administration. That's a bold and clever move.

Samaha also discussed flag burning, the withholding of information by the president (for example, about Trump organization business), and potential issues raised if Trump were to sue individuals who worked for his businesses to enforce confidentiality agreements. Additionally, he addressed ways in which conventional legal logic might break down in assessing some of these issues. Listen to Samaha’s full remarks, or read them in the transcript.

I've tried to pull together a coherent set of policies from Donald Trump’s tweets, campaign rhetoric, and cabinet choices. The themes that emerge when you look at all of that are troubling, to say the least, and suggest that we are likely to see a radically altered view of justice in this country. Or, to be more precise, we're likely to experience a set of regressive policies that harken back to the law-and-order regime of a Nixon administration. And those were the sorts of policies that led to the retributive path of crime control and radicalized policing strategies from which we have yet to recover.

Trump ran on a law-and-order platform because he likes to proclaim he believes that crime is out of control. So, his priorities, or at least as he articulated them and his nominee for attorney general has articulated them, are to crack down on drugs and violent crime. And given those priorities, Trump has advocated a return to more aggressive anti-crime tactics. He has recommended the widespread use of stop-and-frisk by law enforcement, and we will likely see incentives from the federal government to states in the form of federal aid to states to encourage the implementation of the kinds of policies that he would like to see spread. As many of you know, the stop-and-frisk policies that were used by the New York Police Department and applauded by Trump were ultimately found to be unconstitutional in their application.

Trump is also calling for less regulation of police. The Obama Justice Department made great use of its power to investigate law enforcement agencies engaged in a pattern or practice of violating civil rights. Attorney General–nominee Jeff Sessions has condemned such interventions as an abuse of federal authority. What we're seeing is that Sessions and Trump are actually looking at some of the violence that police are engaging in against citizens as the behavior of "rogue officers" rather than the byproduct of a culture that too often sees itself as an occupying force in communities of color.

Taylor-Thompson also predicted the end to efforts to reduce the length of prison sentences and number of people incarcerated and US Supreme Court picks who would not be receptive to abolishing the death penalty. Listen to Taylor-Thompson’s full remarks, or read them in the transcript.

I doubt that the current Supreme Court would actually sustain an immigration policy that openly excluded immigrants on the basis of race or religion. What we’re more likely to see, of course, and what the more-recent policy proposals reflect, are policies that use proxies. Like picking a list of countries, in the way that the Bush administration did, for either exclusion or special registration, where it happens to be the case that the list of countries chosen is highly correlated with nations that have significant Muslim populations or significant Arab populations. Those, I think, might be sustained by courts. Constitutional law actually does very little to regulate policies that are neutral on their face, but that are correlated with things like race and religion. The tests that litigants must overcome to demonstrate that those policies constitute unconstitutional discrimination are extremely demanding. And as a result, it's very difficult for profiling litigation in any context to succeed.

Cox also spoke about possible actions to deport some of the roughly 11 million non-citizens in the US who are formally deportable and on potential legal challenges to limit the kinds of changes the president can make in immigration policy purely through administrative action. Listen to Cox’s full remarks, or read them in the transcript.

I was asked to talk about decentralization and localism and how Trump might affect that. One example is his proclaimed effort to go after so-called sanctuary cities. Now, these are cities that have a law enforcement policy of not collecting or distributing data—immigrant data—about the immigrant status of people they detain or question. And you might ask, “What tools does the federal government have in its toolkit to go after these cities to re-centralize? To re-regulate.”

One tool they could try would be to pull various law enforcement grants. Cities do get a significant amount of law enforcement money, but it's not that much. It's not huge-ticket money. So, in order for this cudgel to be effective against a city that has very large electoral incentives not to turn over immigration or collect immigration information, I think they'd have to go after other grants. They'd have to go for the grants that are only tenuously related to law enforcement. Now, as you know from National Federation of Independent Business v. Sebelius [a 2012 Supreme Court ruling upholding the Affordable Care Act], our own Chief Justice Roberts has written an opinion that says you can't go after unrelated money if it's a very large sum of money, and if it's a very large sum of money that looks like it's being used to coerce sub-national governments into cooperating with the feds. And so, ironically, a precedent that liberals hate [because it allowed states to opt out of Medicaid expansion without losing their normal Medicaid allotment] will turn out to be the last best hope of sanctuary cities. Because if Trump tries to go after, say, city Medicaid money, well, that would raise, I think, serious constitutional questions of state autonomy.

Hills spoke broadly about measures the Trump administration would take to decentralize federal regulation in some areas and re-centralize it in others. Specific examples he addressed include Clean Air Act exemptions, state consumer-protection laws, pharmaceutical tort liability, and legalization of marijuana. Listen to Hills’s full remarks, or read them in the transcript.