Global Crackdown: Kevin Davis examines whether the US model for fighting transnational bribery is appropriate for the rest of the world 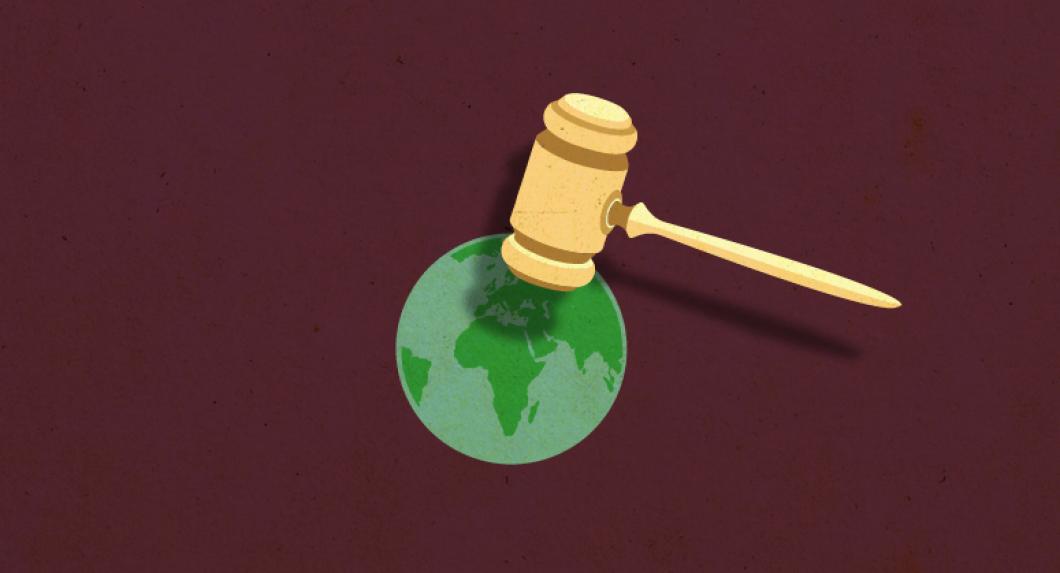 To take a stance against bribing foreign public officials is not an especially controversial move. “Everybody I meet cares about [corruption], thinks it’s a problem,” says Beller Family Professor of Business Law Kevin Davis. But not everyone agrees about the solution.

“It’s not so much the prohibition, but the way that it’s enforced,” Davis says. Some critics argue that today’s prevailing approach to fighting corruption amounts to the imposition of one legal framework on the rest of the world by a small group of wealthy countries. In his latest book, Between Impunity and Imperialism: The Regulation of Transnational Bribery, Davis uses a series of high-profile cases to examine the modern approach to transnational anti-bribery law—and its shortcomings.

The central questions involved in regulating transnational bribery “are easy to identify,” Davis writes. “What should be prohibited? Which actors should be targeted? What sanctions ought to be imposed? Who ought to make and implement these decisions?” Answering those questions is more difficult, he writes, noting, “There is room for disagreement on every one.”

But Davis is well positioned both to examine these questions and to attempt to answer them. The book is the culmination of years of scholarship on the regulation of transnational bribery; Davis has authored and co-authored numerous papers on the subject, including “Contracts Procured Through Bribery of Public Officials: Zero Tolerance Versus Proportional Liability” in the NYU Journal of International Law and Politics 1261 (2018); “Foreign Affairs and Enforcement of the Foreign Corrupt Practices Act” in the Journal of Empirical Legal Studies (2014); and “Why Does the United States Regulate Foreign Bribery: Moralism, Self-Interest or Altruism?” in the NYU Annual Survey of American Law (2012).

The dominant approach to regulating transnational bribery, Davis says, is relatively simple: It’s the idea that “every little bit helps.” Bribery should be defined broadly; the net of liability should extend beyond the individuals directly implicated in bribe to include a wide range of associated individuals and organizations; penalties should be stiff; and finally, as many different jurisdictions as possible should play a role in enforcement, raising the odds that any incident of corruption will be caught in at least one jurisdiction. Because this approach has been endorsed by the Organization for Economic Cooperation and Development (OECD), Davis calls it “the OECD paradigm.” “There’s a lot to suggest that it’s effective, efficient, and legitimate to have this approach,” Davis says.

An anti-imperialist critique of this approach, however, suggests that a small group of relatively wealthy countries should not have the power to impose their laws and values on the rest of the world, where people might have different legal and economic priorities.

At a book launch event held at NYU Law in September, Davis explored this critique, using as an example a major corruption case involving Odebrecht, one of Brazil’s largest companies.  Odebrecht was accused of colluding with other companies to pay bribes to get contracts with Brazil’s state oil company. Because Odebrecht used New York-based bank accounts and staff located in Miami in some of the transactions, the case involved violations of the United States’s Foreign Corrupt Practices Act (FCPA). In 2016 the company pleaded guilty in US court to conspiracy to violate the FCPA, agreeing to pay $2.6 billion in penalties.

Davis called the Odebrecht case a quintessential bribery case, and said he agreed that the company should be prosecuted under anti-bribery laws. But, Davis asked, “is it really appropriate for prosecutors in the United States to be deciding on what sort of sanctions to impose on a company, when the effects will be felt in Peru, Brazil, and Panama, and the Dominican Republic?”

Davis also questioned whether the US should be prosecuting foreign officials for corruption. As a thought experiment for Americans, Davis proposed: “Imagine that France decided to prosecute Donald Trump. Suppose Russia decided to prosecute the Clintons. There’s a question as to whether [prosecuting foreign public officials is] something that’s desirable.”

At the book launch, Jennifer Arlen, Norma Z. Paige Professor of Law, and Susan Rose-Ackerman, Henry R. Luce Professor Emeritus of Law and Political Science and professorial lecturer in law at Yale, praised Davis’s book as a major new contribution to the field of transnational law. “You do challenge a lot of things I take for granted… so that’s very good for me,” said Arlen. Although Rose-Ackerman questioned whether “impunity” and “imperialism” truly represent a binary choice, she said, “It is an excellent book because it is raising a lot of very important questions that many of us who have worked in this field for a long time need to confront and think about.”

Davis does not propose entirely rejecting modern transnational anti-bribery law—but nor does he argue for maintaining the existing system.  Decisions currently are being made by a “relatively small group of prosecutors” operating under the OECD paradigm, he says. Instead, he says, “we should open up the conversation.”