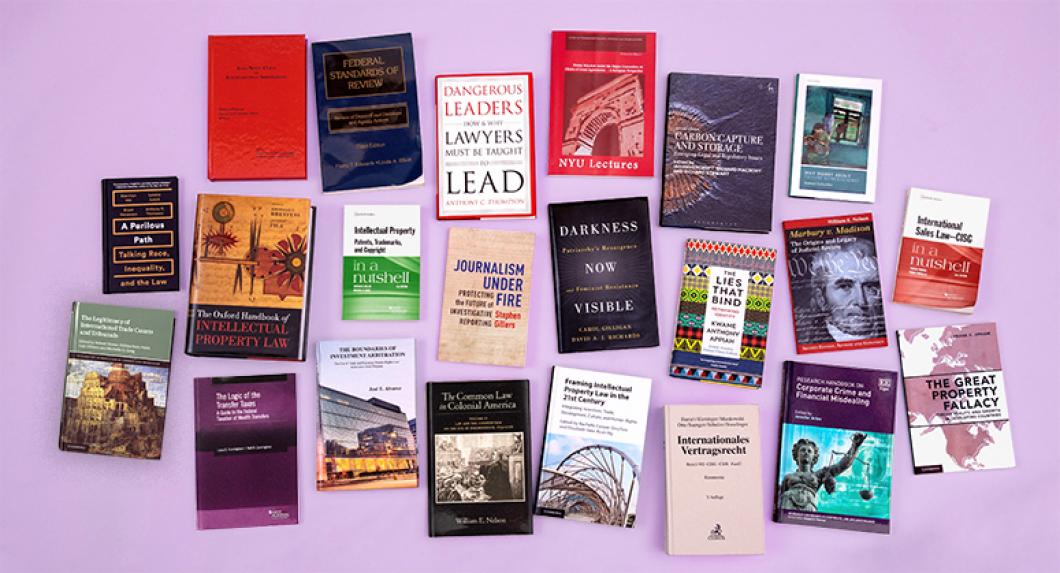 Property rights, carbon capture and storage, and the resurgence of patriarchal ideals are just three of  the topics NYU Law faculty members addressed in books they published—as writers or editors—in 2018. The full range of subjects covered is presented in this roundup. (Except where noted, book descriptions are excerpted from publishers’ websites.)

“[The work] analyzes references to European human rights and WTO law in investor-state rulings, advances reasons for these resorts to ‘non-investment’ law, and puts these ‘boundary crossings’ in broader context. It enumerates the legal gateways for these ‘public law’ references and considers what engagement with human rights and trade law tells us about the motivations of investor-state arbitrators, scholars, and civil society. Exploring when and how arbitrators or litigants reach into other international law regimes to interpret the content of international investment law says a great deal about what that law is—and is not.”

“Kwame Anthony Appiah’s The Lies That Bind is an incandescent exploration of the nature and history of the identities that define us. It challenges our assumptions about how identities work. We all know there are conflicts between identities, but Appiah shows how identities are created by conflict. Religion, he demonstrates, gains power because it isn’t primarily about belief. Our everyday notions of race are the detritus of discarded nineteenth-century science. Our cherished concept of the sovereign nation—of self-rule—is incoherent and unstable. Class systems can become entrenched by efforts to reform them. Even the very idea of Western culture is a shimmering mirage.”

Laura E. Cunningham & Noel B. Cunningham, The Logic of The Transfer Taxes: A Guide to the Federal Taxation of Wealth Transfers (West Academic Publishing)

“[This book] offers a broad survey of the federal transfer tax system. It thoroughly covers all of the fundamental rules of the gift, estate and generation-skipping transfer taxes and provides numerous illustrative examples. It also offers a glimpse of some popular tax planning techniques, including [family limited partnerships, grantor retained annuity trusts, intentionally defective grantor trusts], and the special valuation rules of Chapter 14. It is appropriate for use as a coursebook for a two or three credit JD or LLM course, or as a reference for newcomers to the area.”

“A comprehensive overview of intellectual property law, this handbook will be a vital read for all invested in the field of IP law. Topics include the foundations of IP law; its emergence and development in various jurisdictions; its rules and principles; and current issues arising from the existence and operation of IP law in a political economy.”

“[This work] explains the standards controlling appellate review of district court decisions and agency actions, as well as the key statutes and rules governing appellate practice, a useful resource for any attorney practicing in the federal system.”

“Knowing about the United Nations Convention on Contracts for the International Sale of Goods (CISG) means to know about the law relating to international import/export contracts applicable to more than three-quarters of world trade. This book provides a valuable guide to the understanding of both the fundamentals of that law and how it is interpreted in various countries, thus making it a helpful tool not only for students but also for practitioners.”

“After a long period of legislative and judicial reluctance to accept the idea that the determination of jurisdiction—a matter traditionally reserved to the sovereign—could be influenced by the will of the parties, the acceptance of party autonomy as a basis for jurisdiction in civil and commercial disputes has progressively gained impetus in the international arena. This book analyzes the legal framework governing the enforcement of choice of court agreements provided by the 2005 Hague Convention from an EU perspective, and argues that the overlaps between the regimes currently in force in the European Union may lead to results that are not always predictable, coherent and consistent.” [Abstract, University of Verona website, accessed October 8, 2018]

“[This work] addresses a question that has attracted the attention of both scholars and practitioners for some time, namely that of whether arbitral tribunals may develop their own legal reasoning independently of the agreement and pleadings of the parties, something that may be looked upon as an oxymoron, given that arbitration itself is considered to be nothing but the result of manifestations of party autonomy—at least according to mainstream understanding of arbitration. The national reports included in this book, all drafted by distinguished academics and practitioners, are based on a questionnaire that can be found following this collection.”

“A healthy democracy requires vigorous, uncompromising investigative journalism. But today the free press faces a daunting set of challenges: in the face of harsh criticism from powerful politicians and the threat of lawsuits from wealthy individuals, media institutions are confronted by an uncertain financial future and stymied by a judicial philosophy that takes a narrow view of the protections that the Constitution affords reporters. In Journalism Under Fire, Stephen Gillers proposes a bold set of legal and policy changes that can overcome these obstacles to protect and support the work of journalists. Gillers argues that law and public policy must strengthen the freedom of the press, including protection for news gathering and confidential sources. … Gillers weaves together questions of journalistic practice, law, and policy into a program that can ensure a future for investigative reporting and its role in our democracy.”

“In the fall of 2016, those promoting patriarchal ideals saw their champion Donald Trump elected president of the United States and showed us how powerful patriarchy still is in American society and culture. [This book] explains how patriarchy and its embrace of misogyny, racism, xenophobia, homophobia, and violence are starkly visible and must be recognized and resisted. Carol Gilligan and David A. J. Richards offer a bold and original thesis: that gender is the linchpin that holds in place the structures of unjust oppression through the codes of masculinity and femininity that subvert the capacity to resist injustice. Feminism is not an issue of women only, or a battle of women versus men—it is the key ethical movement of our age.”

“The recent rise of international trade courts and tribunals deserves systemic study and in-depth analysis. This volume gathers contributions from experts specialized in different regional adjudicators of trade disputes and scrutinizes their operations in the light of the often-debated legitimacy issues. It not only looks into prominent adjudicators that have played a significant role for global and regional integration; it also encloses the newly established and/or less-known judicial actors. Critical topics covered range from procedures and legal techniques during the adjudication process to the pre- and post-adjudication matters in relation to forum selection and decision implementation.”

William E. Nelson, The Common Law in Colonial America: Law and the Constitution on the Eve of Independence, 1735-1776 (Volume IV in a series; Oxford University Press)

“The eminent legal historian William E. Nelson's magisterial four-volume The Common Law in Colonial America traces how the many legal orders of Britain's thirteen North American colonies gradually evolved into one American system. Initially established on divergent political, economic, and religious grounds, the various colonial systems slowly converged until it became possible by the 1770s to imagine that all thirteen participated in a common American legal order, which diverged in its details but differed far more substantially from English common law.”

“Nelson relates the story behind Marbury and explains why it is a foundational case for understanding the Supreme Court. He reveals how Marshall deftly avoided a dangerous political confrontation between the executive and judicial branches by upholding the rule of law. Nelson also shows how Marshall managed to shore up the Court’s prestige and power rather than have it serve partisan political agendas.”

“The things we do today may make life worse for future generations. But why should we care what happens to people who won't be born until after all of us are gone? Some philosophers have treated this as a question about our moral responsibilities. … Rather than focusing exclusively on issues of moral responsibility, Samuel Scheffler considers the broader question of why and how future generations matter to us.… Implicit in our existing values and attachments are a variety of powerful reasons for wanting the chain of human generations to persist into the indefinite future under conditions conducive to human flourishing. This has implications for the way we think about problems like climate change. And it means that some of our strongest reasons for caring about the future of humanity depend not on our moral duty to promote the good but rather on our existing evaluative attachments and on our conservative disposition to preserve and sustain the things that we value.”

“This blisteringly candid discussion of the American dilemma in the age of Trump brings together the head of the NAACP Legal Defense Fund, the former attorney general of the United States, a bestselling author and death penalty lawyer, and a star professor for an honest conversation the country desperately needs to hear. Drawing on their collective decades of work on civil rights issues as well as personal histories of rising from poverty and oppression, these leading lights of the legal profession and the fight for racial justice talk about the importance of reclaiming the racial narrative and keeping our eyes on the horizon as we work for justice in an unjust time.”

“Carbon Capture and Storage (CCS) is increasingly viewed as one of the most significant ways of dealing with greenhouse gas emissions. Critical to realising its potential will be the design of effective legal regimes at national and international level that can handle the challenges raised but without stifling a new technology of potential great public benefit. These include: long-term liability for storage; regulation of transport; the treatment of stored carbon under emissions trading regimes; issues of property ownership; and, increasingly, the sensitivities of handling the public engagement and perception.”

Anthony C. Thompson, Dangerous Leaders: How and Why Lawyers Must Be Taught to Lead (Stanford University Press)

“Dangerous Leaders exposes the risks and results of leaving lawyers unprepared to lead. It provides law schools, law students, and the legal profession with the leadership tools and models to build a better foundation of leadership acumen. Anthony C. Thompson draws from his twenty years of experience in global executive education for Fortune 100 companies and his experience as a law professor to chart a path forward for better leadership instruction within the legal academy. Using vivid, real-life case studies, Thompson explores catastrophic political, business, and legal failures that have occurred precisely because of a lapse in leadership from those with legal training. He maintains that these practices are chronic leadership failures that could have been avoided.”

“In this groundbreaking book, Frank K .Upham uses empirical analysis and economic theory to demonstrate how myths surrounding property law have blinded us to our own past and led us to demand that developing countries implement policies that are mistaken and impossible. Starting in the 16th century with the English enclosures and ending with the World Bank’s recent attempt to reform Cambodian land law—while moving through 19th century America, postwar Japan, and contemporary China—Upham dismantles the virtually unchallenged assertion that growth cannot occur without stable legal property rights, and shows how rapid growth can come only through the destruction of pre-existing property structures and their replacement by more productive ones.”