Hot off the Press: NYU Law faculty books of 2017 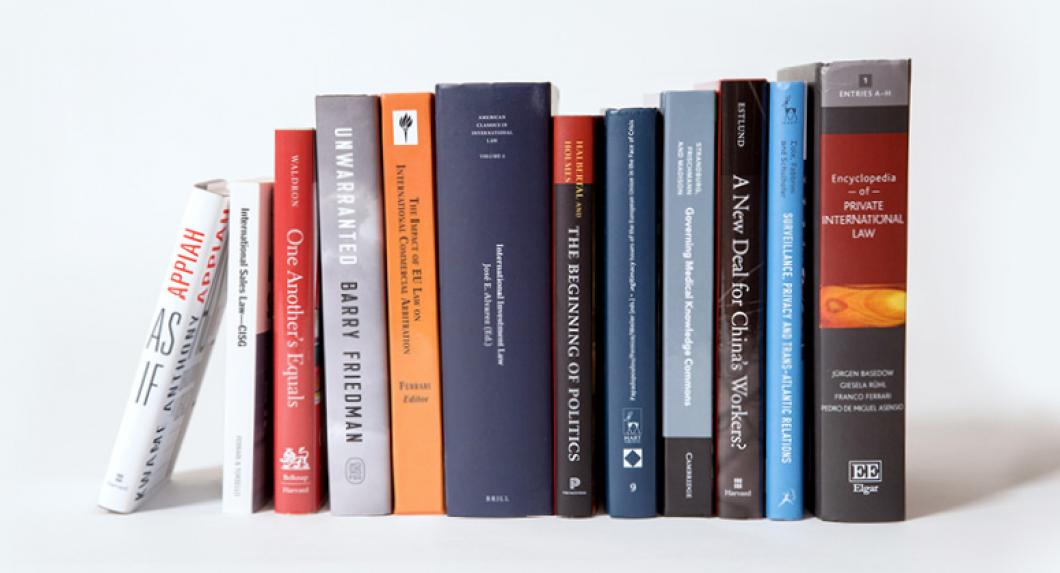 One way to get a sense of the breadth of scholarship at NYU Law is to look at the assortment of books faculty members have written and edited in a given year. In 2017, topics addressed included workers’ right in China, policing in the US, international sales law, and more. A round-up is below. (Book descriptions are excerpted from publishers' websites.)

“Edited by Professor José E. Alvarez, [this book] contains a selection of the best scholarship on the subject produced by those with a connection to the United States. … The volume also contains selections of U.S. treaties that have influenced the over 3,400 international investment agreements (IIAs) now in existence, [as well as] a selection of significant addresses by prominent U.S. policy-makers. … A comprehensive introduction by the Editor … puts the various elements—the contributions made by U.S. academics, treaty-negotiators, and policy-makers—in a broader context.”

“Idealization is a fundamental feature of human thought. We build simplified models in our scientific research and utopias in our political imaginations. Concepts like belief, desire, reason, and justice are bound up with idealizations and ideals. Life is a constant adjustment between the models we make and the realities we encounter. In idealizing, we proceed “as if” our representations were true, while knowing they are not. … As If explores how strategic untruth plays a critical role in far-flung areas of inquiry: decision theory, psychology, natural science, and political philosophy.”

“Once-silent, [Chinese] workers have found their voice, organizing momentous protests, such as the 2010 Honda strikes, and demanding a better deal. China’s leaders have responded not only with repression but with reforms… Cynthia Estlund views this changing landscape through the comparative lens of America’s twentieth-century experience with industrial unrest… Estlund argues that the specter of an independent labor movement, seen as an existential threat to China’s one-party regime, is both driving and constraining every facet of its response to restless workers. … Estlund’s sharp observations and crisp comparative analysis make China’s labor unrest and reform legible to Western readers."

“This authoritative collection presents carefully selected scholarly articles that describe and examine the principles of international sales law, as set forth in the United Nations Convention on Contracts for the International Sale of Goods (CISG). These seminal pieces reflect various viewpoints of authors from different countries and legal systems, and offer a range of distinct methodological approaches to legal analysis. Together with an original introduction by the editors, these volumes provide the reader with both an international and an interdisciplinary perspective on the CISG and its application.”

“In June 2013, documents leaked by Edward Snowden sparked widespread debate about secret government surveillance of Americans. Just over a year later, the shooting of Michael Brown, a black teenager in Ferguson, Missouri, set off protests and triggered concern about militarization of law enforcement and discriminatory policing. In Unwarranted, Barry Friedman argues that these two seemingly disparate events are connected—and that the problem is not so much the policing agencies as it is the rest of us. We allow these agencies to operate in secret and to decide how to police us, rather than calling the shots ourselves. And the courts, which we depended upon to supervise policing, have let us down entirely.”

“The Beginning of Politics mines the story of Israel's first two kings to unearth a natural history of power, providing a forceful new reading of what is arguably the first and greatest work of Western political thought: The Book of Samuel. Moshe Halbertal and Stephen Holmes show how the beautifully crafted narratives of Saul and David cut to the core of politics, exploring themes that resonate wherever political power is at stake.”

“This book brings together some of the leading experts in the fields of constitutional law, criminal law and human rights from the US and the EU to examine the protection of privacy in the digital era, as well as the challenges that counter-terrorism cooperation between governments pose to human rights. … As technology enables governments to know more and more about their citizens, and about the citizens of other nations, this volume offers critical perspectives on how best to respond to one of the most challenging developments of the twenty-first century.”

“Jeremy Waldron argues that there is no single characteristic that serves as the basis of equality. He says the case for moral equality rests on four capacities that all humans have the potential to possess in some degree: reason, autonomy, moral agency, and the ability to love. But how should we regard the differences that people display on these various dimensions? And what are we to say about those who suffer from profound disability—people whose claim to humanity seems to outstrip any particular capacities they have along these lines? Waldron, who has worked on the nature of equality for many years, confronts these questions and others fully and unflinchingly.”

“The EU is now facing serious questions of its own legitimacy. This collection looks at this basic question of EU legitimacy. It examines questions of democracy theory, examines why these crises have emerged, and explores the judicial response to them. … It goes on to suggest possible treatments in the form of reform proposals. Closing with a dialogical epilogue by Joseph Weiler, the book opens up a debate which will engage European lawyers for some time to come.

Laura E. Cunningham & Noël B. Cunningham, The Logic of Subchapter K: A Conceptual Guide to the Taxation of Partnerships (5th ed., West Academic 2017)