Checks and Balances: Noah Rosenblum considers the antifascist origins of US presidential administration 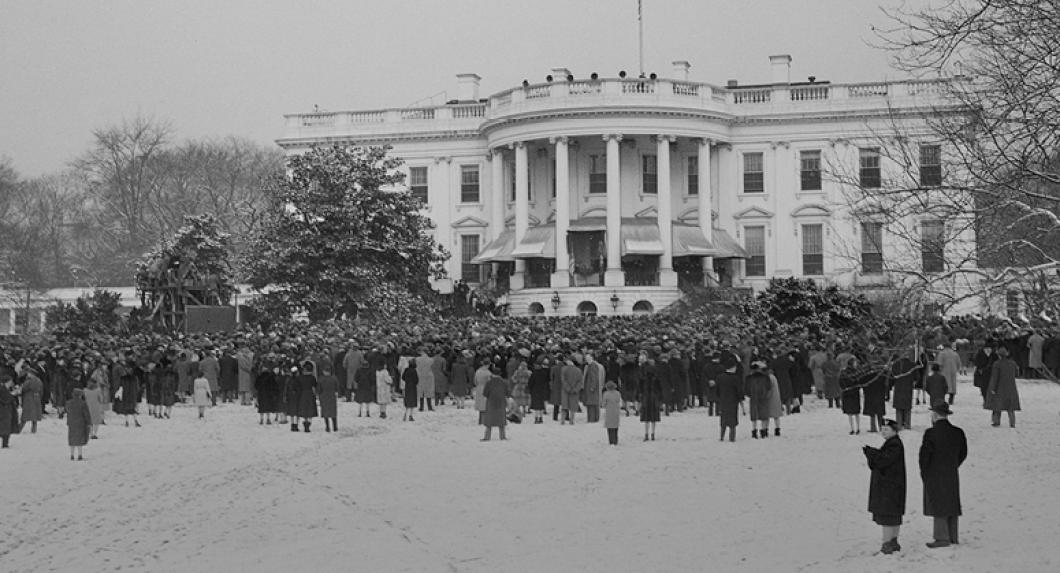 For much of the United States’s history, the president’s powers were relatively weak, by design. The framers of the Constitution did not want to create a de facto monarchy. But recent presidents have exerted their authority in ways that have sometimes prompted accusations of executive overreach—for example, through unilateral actions like executive orders, used by Donald Trump to implement the so-called “Muslim ban,” and by Joe Biden to cancel student loan debt. Defenders of presidential power have argued that these measures become necessary when Congress cannot or will not act to address major issues.

In Professor Noah Rosenblum’s 2022 Columbia Law Review article, “The Antifascist Roots of Presidential Administration,” he delves into history to elucidate the origins of a model of governance whose legal justifications remain contested. “We’re seeing presidents using their power to try to implement policy,” he says, “and I started wondering where that came from and how things came to be that way.”

Rosenblum’s primary focus is the President’s Committee on Administrative Management (PCAM), a panel of experts convened by President Franklin Roosevelt to develop ideas for reorganizing the executive branch of the federal government. Initially rejected, PCAM’s recommendations nevertheless exerted great influence on subsequent reorganization attempts and efforts to increase the president’s power over the administrative state.

While Rosenblum is far from alone among scholars in viewing the work of PCAM as a primary root of expanded executive power, he asserts that another of the committee’s intentions—to implement certain checks on presidential power to prevent authoritarianism—has often been overlooked. Rosenblum suggests that understanding why presidential administrations have come to be structured as they are can lead to better constitutional jurisprudence, particularly in domestic matters.

In the article—which received an honorable mention in the competition for the 2023 Emerging Scholar Award given by the Association of American Law Schools' Section on Administrative Law—Rosenblum cites the 2020 Supreme Court decision in Seila Law LLC v. Consumer Financial Protection Bureau (CFPB) as illustrative of why historical understanding matters. A majority of justices found that the CFPB’s structure—headed by a single director whom the president could remove only “for cause”—violated the separation of powers. The Court employed the unitary executive theory, which holds that Article II of the Constitution gives the president control of the entire executive branch. The majority argued that the framers, by requiring the entire nation to elect the president, implicitly justified this extensive presidential power in order to ensure agencies are responsive to the public that chose the chief executive.

The dissenting opinion in Seila Law, however, invoked a different view of history by pointing to precedent for single-director structure at least as old as the Civil War era—for example, when Congress specified that the president could remove the comptroller of the currency only after justifying the decision to the Senate. That implied executive control over the administrative state sprang from congressional acts rather than the Constitution.

Many scholars, disagreeing with the Supreme Court majority’s notion that presidential administration is rooted in the country’s founding, have identified its origins in PCAM instead. The more than three dozen recommendations from PCAM’s final report included providing the president with administrative aides, giving the president greater control over administrative departments, and bringing the key managerial agencies into the Executive Office of the President. Many of these ideas either found their way into the Reorganization Act of 1939, which allowed the president to reorganize the executive branch, or otherwise were adopted over time.

But Rosenblum argues that the consensus interpretation of PCAM’s report as supporting strong executive power is a misreading that distorts today’s constitutional jurisprudence. On the contrary, he says, PCAM sought a delicate balance between giving presidents the power to guide the administrative state effectively and efficiently, on the one hand, and on the other, ensuring that presidents would not become too powerful.

PCAM, Rosenblum writes, supported separation of powers both between the federal government branches and within the executive branch itself. The committee asserted that the existing assortment of independent commissions was undemocratic and unaccountable to the people, and needed to be brought under the executive branch—and thus, presidential power. At the same time, PCAM proposed checks and balances within the executive branch, separating certain roles and functions from one another to limit the power of both agencies and the president.

Rosenblum’s investigation of the historical record finds that PCAM’s strong support for separation of powers came late in the process. He points to an encounter between committee members and fascist intellectuals at a meeting of the Congress of Administrative Sciences in Warsaw in 1936 as a potential reason. A heated debate erupted between advocates of the absolute authority of chief executives, with states as extensions of their personalities, and those who supported some independence for administrative agencies. Rosenblum sees that moment, against the backdrop of Hitler’s growing power and Mussolini’s recent invasion of Ethiopia, as a turning point for PCAM. In its final report, the PCAM committee stressed checks on presidential authority in the interest of antifascism, even as it enhanced that authority in other ways to help the president make government more responsible to citizens.

Rosenblum says he wants readers to understand that fascism isn’t always as overt as a red-faced tyrant in a military uniform inveighing from a balcony. He offers an “antifascist litmus test,” based on PCAM’s work, for theories of executive governance. The question: whether a given administrative regime organizes executive power such that it permits the president to make the administrative state into an extension of the president’s personality, or if the regime instead guards against the chief executive’s use of presidential powers for personal benefit.

Recent Supreme Court opinions predicated on the unitary executive theory weaken the safeguards that PCAM intended to counterbalance increases in presidential power, Rosenblum suggests. “I want to recover the intent of the architects of presidential administration so that we can better appreciate what its goals were and also evaluate what its weaknesses are,” Rosenblum says. “The fact that we made it one way means that if we wanted to, we should at least feel license to remake it,” he adds, “and we can start asking ourselves whether we want to remake it differently.”

“Digging into the Past: Noah Rosenblum brings his legal history expertise to the NYU Law faculty”
NYU Law website, 9/9/21