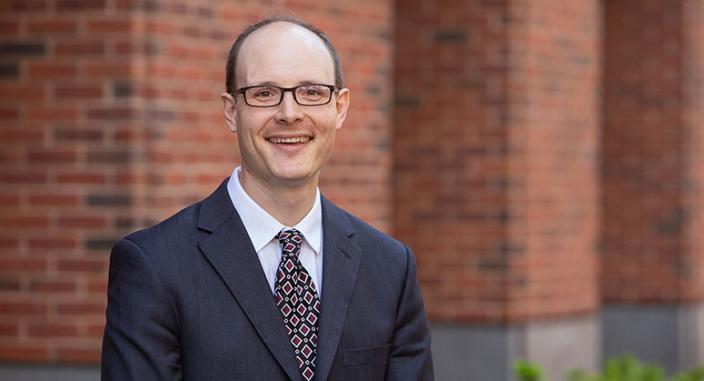 Growing up, Michael Ohlrogge planned to become a Unitarian Universalist minister. But after graduating from the University of Michigan with a BA in ancient civilizations and biblical studies, Ohlrogge worked as a community organizer with the Gamaliel Foundation in Oakland, California. When he saw the impact of the 2008 financial crisis on Oakland residents, he discovered a different calling.

“I watched as people I worked closely with lost their jobs, had their homes foreclosed upon, and saw government programs like transportation and education slashed as housing prices plunged and the state tax base collapsed,” Ohlrogge says. “I saw law school as a better way to understand the causes of this crisis and the steps that might prevent future crises.”

He adds: “I came to the belief that I could do even more good in the world by positively impacting policy than I could through the ministry.”

In June Ohlrogge joined NYU Law as assistant professor of law, after spending almost a decade at Stanford University acquiring the legal and quantitative skills to explore economic and policy problems. Taking his JD at Stanford Law School, Ohlrogge earned two more degrees at Stanford University: a master’s degree in economics and a PhD in management science and engineering, with a concentration in finance and economics.

He didn’t wait to finish graduate school before impacting policy, though. When the US Securities and Exchange Commission (SEC) began developing proposed regulations under the Dodd-Frank Wall Street Reform and Consumer Protection Act that would require companies to disclose the ratio of CEO pay to the median pay for employees, many companies protested, calling the requirement too cumbersome. In 2012 Ohlrogge filed comments with the SEC that suggested statistical sampling techniques on employee compensation as a less costly and labor-intensive method of compliance. The SEC picked up on his suggestion and made it clear to businesses that they could use statistical samples in the required calculations.

Broadly, Ohlrogge’s research provides statistical evidence for the ways in which legal structures influence how corporations take on risk, and studies how the public good is affected—positively or negatively—by that risktaking. His dissertation focused on the increase of risky investments by banks with larger debt-to-equity ratios. Ohlrogge’s recent research has explored the increased likelihood of environmental violations by corporations approaching insolvency and how creditors are more likely to demand safer waste disposal practices when companies are unable to discharge cleanup costs in bankruptcy.

“The only way I know how to be a scholar is as an engaged citizen,” Ohlrogge says. “I’m not temperamentally suited to do scholarly work that doesn’t have an implication and direct relevance to policy issues of importance.”

“Michael has been an exceptionally talented law student and empirical researcher who has already made important academic contributions in the fields of bankruptcy, securities law, banking, and environmental law,” says John Donohue III, C. Wendell and Edith M. Carlsmith Professor of Law at Stanford, who served on the reading committee for Ohlrogge’s dissertation and has also worked with him on consulting projects. “If you look at his scholarly output as he begins his legal academic career, it already rivals those of many individuals as they are being evaluated for tenure. With his strong commitment to the public interest coupled with his enormous creativity and productivity, I expect great things for Michael in the next few years.”

In Spring 2020, Ohlrogge will teach Bankruptcy. He says he is looking forward to having colleagues at NYU Law like George T. Lowy Professor of Law Marcel Kahan, Bernard Petrie Professor of Law and Business Barry Adler, Professor Ryan Bubb, and Lawrence King Professor of Law and Dean Emeritus Richard Revesz, all of whom he admires for their engaged scholarship. Ohlrogge is currently co-authoring a paper with Visiting Professor Michael Klausner on special purpose acquisition corporations and the challenges created by their complex capital structure and the subsequent incentive conflicts among the corporations’ stakeholders.

When not working on economic puzzles, Ohlrogge enjoys running and hiking. At press time, he was relocating to New York from California with his wife and two-year-old son.

“As a person who grew up in Michigan, I am looking forward to enjoying weather like snow and thunderstorms, both of which are largely absent in California,” he says.