Digging into the Past: Noah Rosenblum brings his legal history expertise to the NYU Law faculty. 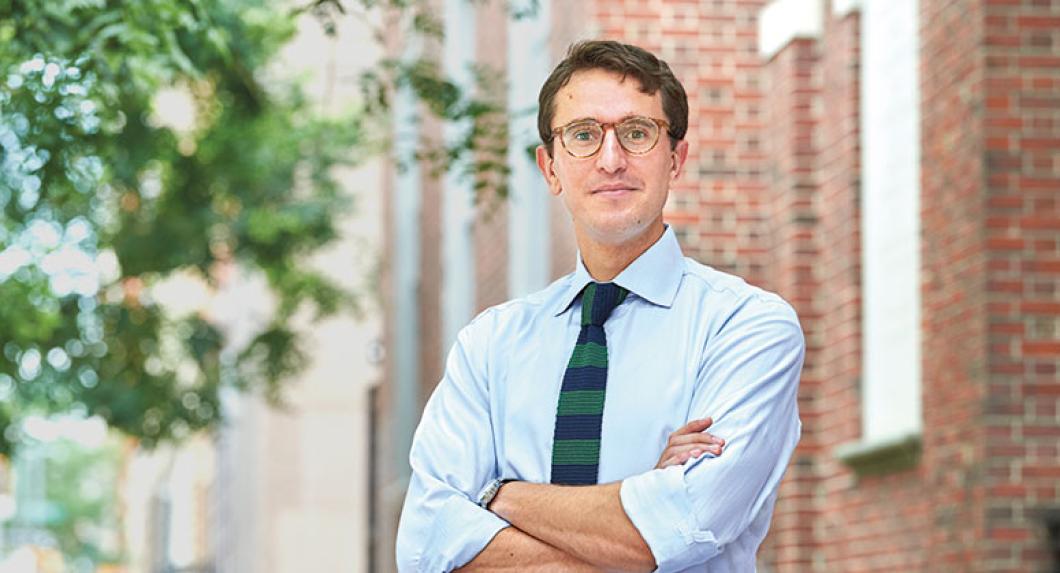 An introduction to Noah Rosenblum’s two cats—Jackson, named for former US Supreme Court Justice Robert Jackson, and Clio, for the muse of history—is an introduction to his dual loves: law and history. He has pursued both throughout his career, including at NYU Law, where he became an assistant professor of law in June.

“When the opportunity presented itself to join the faculty and become a steward of this incredible legacy that William Nelson ’65 and Daniel Hulsebosch really helped build, that’s the chance of a lifetime,” says Rosenblum, naming two NYU Law faculty members recognized for their work as legal historians. “You can’t be a legal academic and not have a bit of a crush on the NYU Law faculty because they’ve just got such amazing people.” In addition to legal history, Rosenblum’s scholarly interests include administrative law, constitutional law, and legal ethics and professional responsibility. He will teach Legislation and the Regulatory State for Transfer Students and LLMs in Fall 2021 and Constitutional Law in Spring 2022.

Rosenblum has already spent two years at the Law School, first as a Program Affiliate Scholar and then as a Samuel I. Golieb Fellow in Legal History. Rosenblum earned his JD at Yale Law School and is pursuing his PhD in history at Columbia University, where next year he is expected to defend his dissertation, “The Tribe of the Eagle: Presidential Democracy in Thought and Practice,” a new history of the legal, institutional, and intellectual development of the administrative state.

Rosenblum’s interest in law and history developed when he served as a research fellow in 2009 for Citizens for Responsibility and Ethics in Washington (CREW), a government accountability watchdog in Washington, DC. “I was struck by the disconnect between our values and the way government operated, and in particular, by a feeling that there was some kind of democratic deficit,” he says. CREW often contacted law professors for a better understanding of legal issues, Rosenblum says, and he began to envision himself as an academic who could provide those legal insights.

“Noah was my student here at Yale as he finished his law degree and pursued his history PhD. I am stunned time and again by his combination of kindness and brilliance—and by his disarming good humor,” says Professor John Fabian Witt of Yale Law School. “Our loss in New Haven is NYU’s gain. I can’t wait to read his work for years to come.”

After Rosenblum finished law school, he clerked for Associate Judge Jenny Rivera ’85 of the New York Court of Appeals and for Judge Guido Calabresi of the US Court of Appeals for the Second Circuit.

Among his current projects, Rosenblum is collaborating with the New York City Bar Association on a project exploring the history and memorialization of the legal profession in New York. In his spare time, he enjoys exploring present-day New York’s best pizza shops and street food vendors.

“I do think that we are living through a time of incredible challenge. I’m sure that every generation feels this, but I suspect that our generation feels the weight of history especially strongly right now,” Rosenblum says. “It is terribly important—and long overdue—for us to think deeply again about the relationship between history and justice, and how we can design laws that are adequate to making a just society. I feel incredibly excited to be at NYU to do this work. It’s a wonderful place to be thinking about these fundamental basic questions.”