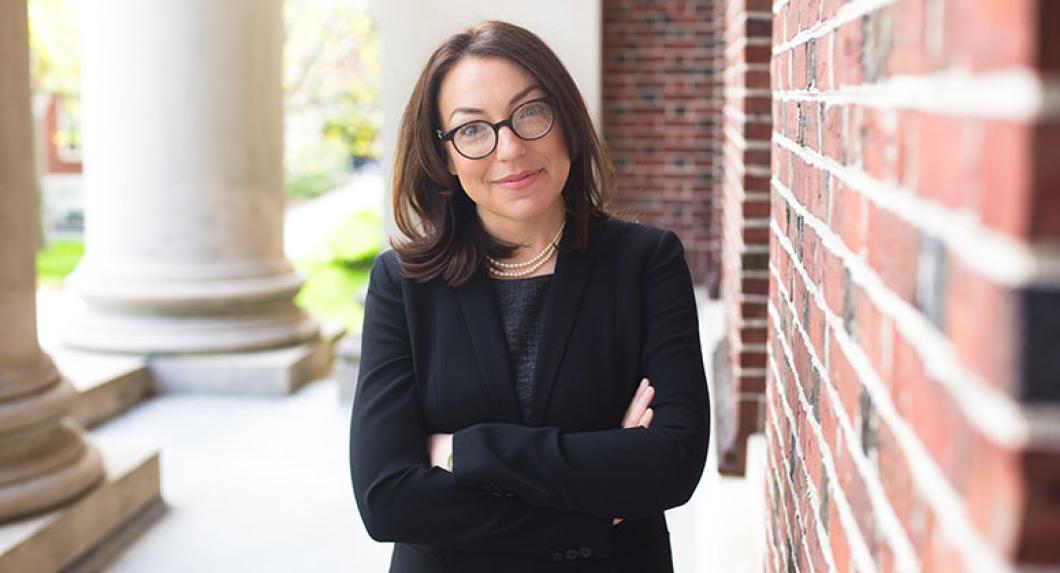 Reexamining conventional assumptions about federalism, the Constitution, and American democracy, Maggie Blackhawk has established herself as an iconoclastic, creative, and rigorous scholar via a series of articles in the legal profession’s most prestigious journals.

In 2019, she published “Federal Indian Law as Paradigm Within Public Law” in Harvard Law Review—the journal’s first Indian law article in nearly 15 years. In 2005, Philip Frickey, a leading constitutional law and federal Indian law expert, had argued that Indian law is incoherent and incompatible with public law principles, but Blackhawk took Frickey’s widely accepted argument head on. It was public law principles that were incoherent, she asserted, because of the erasure of Native people and American colonialism in constitutional law’s development.

Blackhawk’s approach to her research and scholarship began while she was a student at Stanford Law School. Her student note offered a novel interpretation of Congress’s jurisdiction stripping powers under Article III, contributing to the nascent field of constitutional interpretation that took account of later amendments and their impact on the original document. “Professor Janet Alexander, my faculty advisor and fed courts professor, initially thought the idea was crazy. Jurisdiction stripping is a wildly overwritten area,” Blackhawk remembers. Alexander calls Blackhawk’s paper “the most persuasive, and the most original, contribution to understanding of this perennial issue I [had] seen in years.”

As a fellow at Harvard Law School, Blackhawk became fascinated with how the public engaged directly in the lawmaking process—the practice now known as lobbying. “I had a faculty member tell me very bluntly that ‘there is nothing interesting left to say about lobbying,’” Blackhawk says, but in a 2016 article in Stanford Law Review, she took on the longstanding presumption that the US lobbying system is shielded by the Petition Clause. Instead, Blackhawk argued that latter-day lobbying, steeped in special interests, actually violated the right to petition, once a viable avenue for any individual. “Professor Blackhawk’s work in this area is arresting,” says Yale Law School Dean Heather Gerken, adding, “She never fails to make me think about a question differently than I did before.”

Blackhawk’s scholarship is seamlessly interdisciplinary, encompassing legal history, political science, and social science. After graduate work in linguistic anthropology, she trained for a number of years on large-scale social science projects. This training came in handy on the Congressional Petitions Database, a database of more than 500,000 petitions to Congress, that she co-led while at Harvard. Her 2018 Yale Law Journal article illuminates how the petition process, enshrined in the First Amendment, has historically given voice to individuals and unenfranchised minorities and led to the modern administrative state, offering a counterargument to those who suggest the administrative state clashes with the Constitution. It won the American Society for Legal History’s William Nelson Cromwell Article Prize for “combin[ing] exhaustive archival and empirical research with a deft handling of administrative law.”

“It’s not very often that one sees in anyone’s scholarship a truly fresh approach and way of understanding well-trod subjects....[Blackhawk] has all of that in her early work, and she’s continued all the way through her recent tenure decision [at the University of Pennsylvania Carey Law School] to show that she has many fresh ideas,” says Harvard Law Professor Martha Minow.

Blackhawk joins NYU Law as professor of law after four years at Penn, whose Professor Serena Mayeri notes that the 2021 graduating class voted the law school’s Harvey Levin Memorial Award for Teaching Excellence to Blackhawk. “She’s known for being deeply engaged, innovative, and intellectually rigorous,” says Mayeri. “Students regularly describe how she transformed the way they think about the law.”