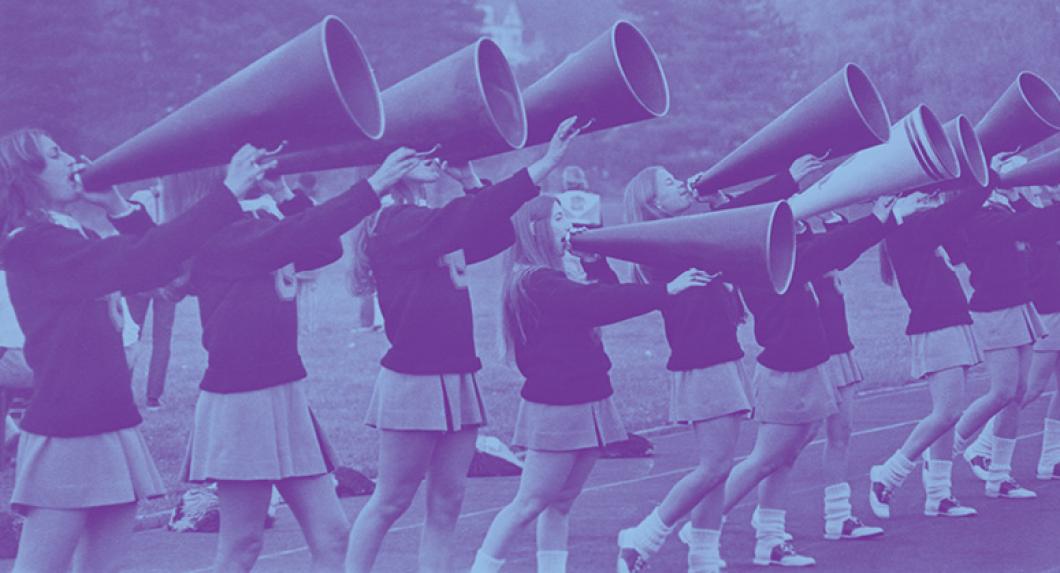 The stripes, chevrons, and color blocks on cheerleader uniforms were up for debate at the Supreme Court when it heard arguments in Star Athletica, LLC v. Varsity Brands, Inc. in October 2016. The case centered on whether Varsity Brands could copyright its uniform designs, and many believed it could help clarify a major but murky issue for the fashion industry: the kinds of intellectual property (IP) protections that are available for its products. In a 6-2 decision in March 2017, the court ruled in favor of Varsity Brands.

Three of NYU Law’s IP professors—Jeanne Fromer, Scott Hemphill, and Christopher Jon Sprigman—filed amicus briefs in the case, and each took a different perspective on the question.

The Copyright Act grants protection only to expressive elements of “useful” items (like clothing or furniture) that are separable from their functional features. A floral pattern on a dress, for example, could also be used to the same effect on wallpaper, and thus is typically eligible for copyright. Should a camouflage print designed to conceal soldiers get the same protection? Distinctions are not always easy to make—as SCOTUSblog noted, one appeals court called the challenge a “metaphysical quandary.”

Hemphill, whose research focuses on the law and economics of competition and innovation, made an argument in support of Varsity Brands’ copyright claim. Joined by Harvard Law School’s Jeannie Suk Gersen—with whom he has written several articles on design copyright and IP in fashion—Hemphill proposed a test of separability that would give broad copyright protections to clothing and apparel designers. “Innovation in fashion is an important form of creativity equal with the more traditional areas that get copyright protection without controversy,” Hemphill said. “Our test gives a fair amount of room for innovators to get protection for their works.” In the Varsity Brands case, he said, “uniforms would be protectable because the surface adornment—the particular patterns of chevrons and stripes—is not dictated by the utilitarian considerations of covering the body, keeping somebody warm, etc.”

In a brief in support of Star Athletica, Sprigman and a group of other IP professors proposed a test in which a design element must not only be separable from the useful article, but also be able to stand alone as a work of artistic expression in order to qualify for copyright protection. This, Sprigman said, is in keeping with how copyright has traditionally been treated in the fashion industry: “Courts have held that, for the most part, copyright does not apply to fashion designs, because they consider fashion—or in this case, apparel—to be a function in itself.”

Sprigman’s book, The Knockoff Economy: How Imitation Sparks Innovation, contends that looser copyright regulation has actually spurred the success of the American fashion industry. “Individual designers might be hurt by copying from time to time,” he said, “but a lot of individual designers benefit—and the net effect seems to be invigorating.”

In their filing in support of Star Athletica, Fromer and co-author Christopher Buccafusco of Benjamin Cardozo School of Law asserted that most design is inseparable from function, because clothing can change the way the wearer is perceived. “A very basic example is stripes,” Fromer explained. “Clothing with horizontal or vertical stripes is supposed to make you look shorter and broader or thinner and taller, respectively.” With cheerleader uniforms, Fromer said, “Many of the design choices that are being claimed as copyrightable have the functional effect of accentuating parts of the cheerleader’s body, elongating the body, and enhancing the body’s curves.”

Fromer specializes in unified theories of copyright and patent law. “If the court ends up ruling in favor of copyrightability here,” she said, “it will change what people have assumed to be true about fashion and copyright—that is, if fashion designers want protection for their work, they have to look outside of copyright law to design-patent and trademark law.”

Although the three NYU Law professors approached the case from different perspectives, they agreed on one thing: the benefit of each other’s discourse. “It’s been great working on this brief in this building, because with folks like Chris and Jeanne ready at hand, it makes for a really fun chance to discuss the issues,” Hemphill said. Fromer concurred, adding: “The fact that we have such a vibrant assortment of views really highlights the depth and breadth of the group we have working on IP at NYU Law.”