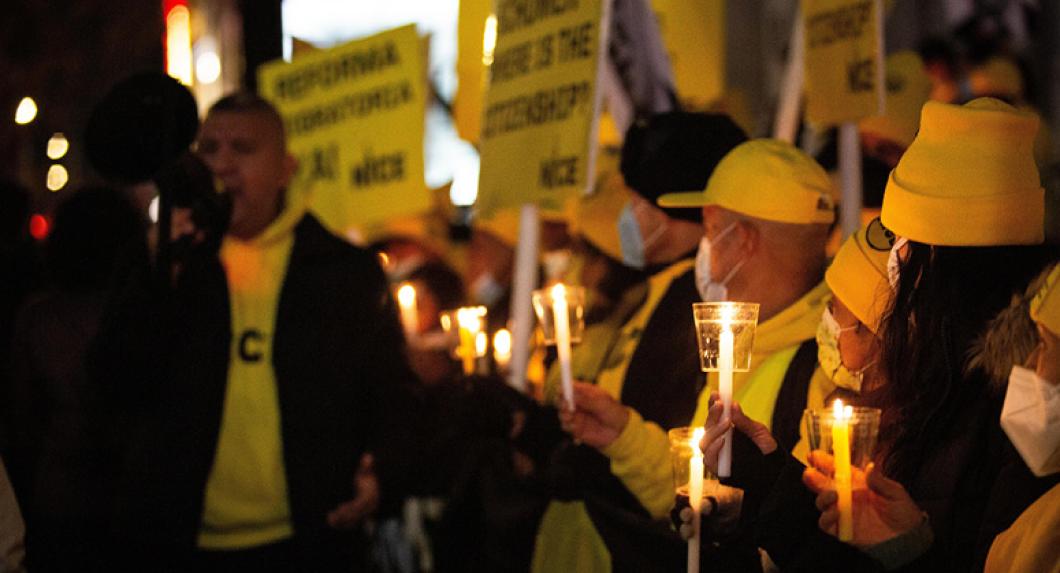 US Immigration and Customs Enforcement (ICE) has repeatedly retaliated against immigrant rights activists for exercising their First Amendment rights, according to a series of complaints filed by Professor of Clinical Law Alina Das ’05 and students in the Immigrant Rights Clinic (IRC) she teaches. Alleged retaliation against noncitizen activists has included detention and deportation. The latest complaint, an administrative action filed in February, alleges a pattern of racist abuse and retaliation against activists held in the Orange County jail in California.

In addition to the litigation, Das has discussed the issue and its implications in “Deportation and Dissent: Protecting the Voices of the Immigrant Rights Movement,” published in the New York Law School Law Review in 2020. In the article, Das chronicled instances in which she says immigration officials “surveilled organizations, churches, and rallies organized by citizens and noncitizens alike,” “tracked protected political speech,” and questioned US citizens affiliated with the immigrant rights movement, including community organizers, lawyers, clergy, and journalists. These actions, she wrote, posed “a severe threat to freedom of speech and the democratic values protected by the First Amendment” and “had a chilling effect on speech and organizing efforts by noncitizens and citizens alike.”

According to Das, retaliatory targeting by ICE increased during the Trump administration. Now, a bit over a year into Joe Biden’s presidency, we asked Das about her work in this area and where things stand.

In court filings, ICE has denied retaliating. How did you make the case that ICE has done so?

While federal immigration officials deny engaging in retaliation, their actions tell a different story. As I discuss in my article, federal immigration officials have openly targeted dozens of their critics—immigrant activists, whistleblowers, immigrant advocacy organizations, and others—for surveillance, fines, detention, deportation, and/or criminal prosecution. It is part of a pattern of more than one thousand examples that my clinical students and I have documented over the last several years.

In court, proving retaliation is an uphill battle because the federal government actually takes the position that no court has the power to consider whether deportation is retaliatory, irrespective of the evidence. I’ve now represented eight immigrant rights activists and/or whistleblowers alleging First Amendment retaliation in federal litigation. Through witness interviews, Freedom of Information Act requests, and, in one case, discovery, we were able to obtain evidence of retaliatory intent.

Speaking broadly, this included evidence that ICE was tracking activists’ statements to media and participation in immigrant rights rallies and vigils; statements from various ICE officials expressing resentment of activists’ criticism of immigration policy; procedural irregularities in how and why individuals were singled out for enforcement actions; and the use of false, pretextual justifications for enforcement actions. ICE ultimately settled some of these cases—without admitting wrongdoing—while others are still ongoing. Other advocates across the country have similarly been pursuing First Amendment lawsuits against the federal government.

Your article says immigration authorities have faced little accountability—judicial, administrative, or legislative—for their deportation decisions, including when allegations of retaliation arise. How did this come to be the case?

The executive branch has amassed significant, largely unchecked power over the lives of immigrants. This hyper-deference to the executive is baked into judicial precedent, first embraced by the Supreme Court during the overtly racist Chinese exclusion period and then repeatedly and robustly applied in various contexts where immigrants have attempted to assert their constitutional rights. Several pivotal immigration cases raising First Amendment claims involved allegations of national security concerns, leading to even deeper reluctance from the Court to reach the First Amendment issues.

To make matters worse, Congress enacted legislation in the 1990s that attempted to strip federal courts of their jurisdiction to hear certain types of immigration cases. The combination of all these factors have led courts to question whether they even have the power to consider a First Amendment challenge to a retaliatory deportation.

The Biden administration appears to have shifted course. New federal guidelines issued last fall by Department of Homeland Security Secretary Alejandro Mayorkas, for example, say a noncitizen’s exercise of First Amendment rights cannot be a factor in immigration enforcement. Does this alleviate your concerns, or are there other measures that should still be taken?

Secretary Mayorkas’s statement is a first and necessary step towards the prevention of retaliation against immigrant rights activists. And we have seen some progress, including DHS’s exercise of positive prosecutorial discretion in some cases where retaliation was alleged. But as my article describes, so much more needs to be done in order to more systemically redress past retaliation, prevent future retaliation, and ensure safeguards and accountability when retaliation does occur.

While we are seeing a shift in how federal immigration officials have been treating immigrant activists, retaliation is still occurring. This is particularly true within immigration jails and prisons where complainants, hunger strikers, and whistleblowers continue to face retaliation for speaking out.

What kind of work have IRC students done on the retaliation issue, and is the clinic still doing work in that area?

IRC represents numerous immigrant rights leaders and whistleblowers, and students have been at the forefront of advancing the First Amendment rights of immigrant activists. Clinic students also prepared the Immigrant Rights Voices map to document patterns of retaliation, met with the Biden Administration’s transition team to address issues of retaliation, and filed a civil rights complaint with the Department of Homeland Security addressing retaliation in July 2021. Most recently, we have joined with immigrant rights organizations to elevate concerns over retaliation within immigration jails and prisons.

“Trapped in the Machine: Alina Das ’05 explores how the criminal legal system has been used to target and deport immigrants”
NYU Law website 11/13/2020