Affective Evidence: Margaret Satterthwaite on the use of empirical data in human rights advocacy 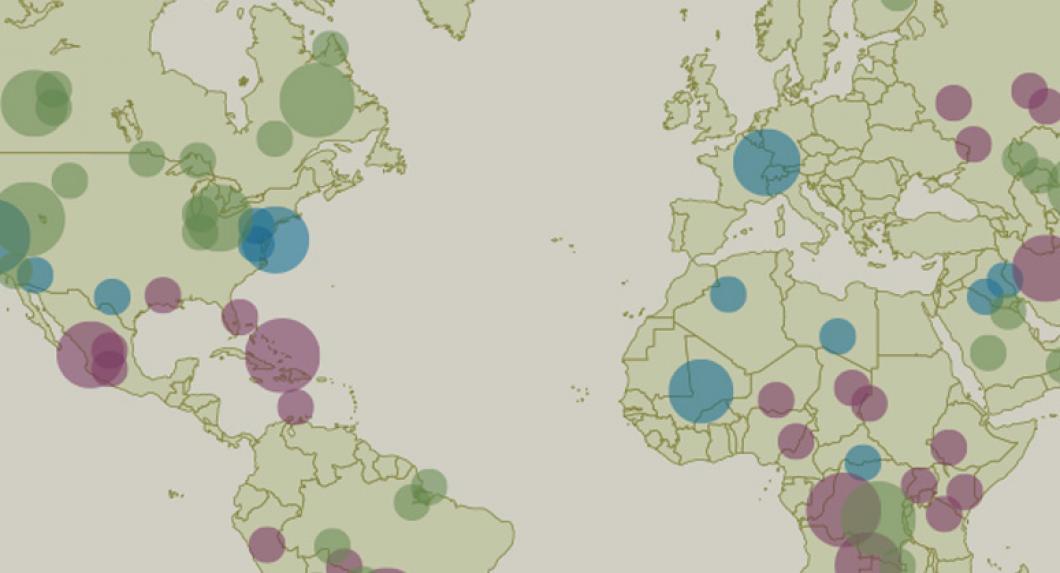 As policymakers, news media, and research communities increasingly rely on big data, the ability to create good visual representations has become key to conveying complicated ideas to a more general audience. But human rights organizations that regularly use empirical analyses in their research have nevertheless been slow to use data visualizations. Professor of Clinical Law Margaret Satterthwaite ’99 and NYU Polytechnic School of Engineering’s Enrico Bertini and Oded Nov recently received a grant from the MacArthur Foundation for their research exploring how advocacy organizations can effectively employ information graphics to tell human rights stories.

Satterthwaite, Bertini, and Nov have already completed two initial user-based studies that investigate how readers respond to visual presentations of data. One study verifies that data visualization is a more effective tool than text in conveying statistics to the reader. In another study focusing on deceptive visualization, Satterthwaite and her collaborators show how it is possible to deceive readers by using correct data but changing the expected visualization. Inverting the axis on a line graph, for example, can lead a reader to believe that an increasing trend is, in fact, decreasing.

“It was quite disturbing how easy and how intense was the effect of deceptive visualization,” Satterthwaite says. Understanding how readers comprehend and react to information graphics is key to helping researchers avoid accidentally overstating or understating their findings. Satterthwaite also notes that it is important to recognize the dangers of deceptive data visualization, which, out of the zeal to convince, could be used to mislead the audience.

Now, with the MacArthur Foundation grant, Satterthwaite says the next phase of research will be to work with various human rights organizations to implement these findings. “The hope,” she says, “is for it not to be just an academic study but a collaboration with real-time impact on how human rights organizations employ data visualization in ongoing research and advocacy.”

Satterthwaite’s work on data visualization is part of a series of interdisciplinary collaborations in which she hopes to encourage innovation in the ways that human rights workers document and demonstrate violations. In another paper, forthcoming in The Future of Human Rights Fact-Finding (co-edited by her NYU Law colleague Philip Alston), Satterthwaite joins Princeton researcher Justin Simeone in looking at whether, as researchers incorporate quantitative methods into human rights research, they can or should follow the same disciplinary standards that guide social science researchers.

Traditionally, human rights advocacy has been based on testimonial evidence, a methodology that arises from practices of both law and journalism. Research demonstrates that people respond more emotionally to stories than they do to statistics, and human rights research is usually performed with the goal of persuading policymakers and the public to take action to prevent or stop violations. “One of the great strengths of the human rights movement is our ability to tell the story of the victim, of the survivor, the person who has experienced a human rights violation, and compel people to act,” says Satterthwaite, who co-edited the 2008 book Human Rights Advocacy Stories. “That is an ethical duty that we have, and we should not abandon it.”

The incorporation of social science methods into human rights research has the potential to amplify the power of storytelling, Satterthwaite says: “We might not be able to demonstrate certain types of inequalities using interviews, for example, but we could show them really easily using quantitative data.” For research into economic and social issues, data often tells a key part of the story not illustrated through individual testimonies. The right to equal access to drinking water, for example, is best documented through mixed methods, including the use of statistics such as the proportion of the population who routinely use a safe source of water and the prevalence of diseases caused by unsafe water. It is also exactly these kinds of statistics that could benefit most from data visualization aimed at telling the human rights story.

With the growing importance of social science methods, human rights advocates are increasingly using both tools, testimonial evidence and empirical data. Satterthwaite hopes her work will guide researchers to make the best choices in employing them. “It may simply be a question of what kind of evidence you need,” she says, “depending on your audience and your purpose.”