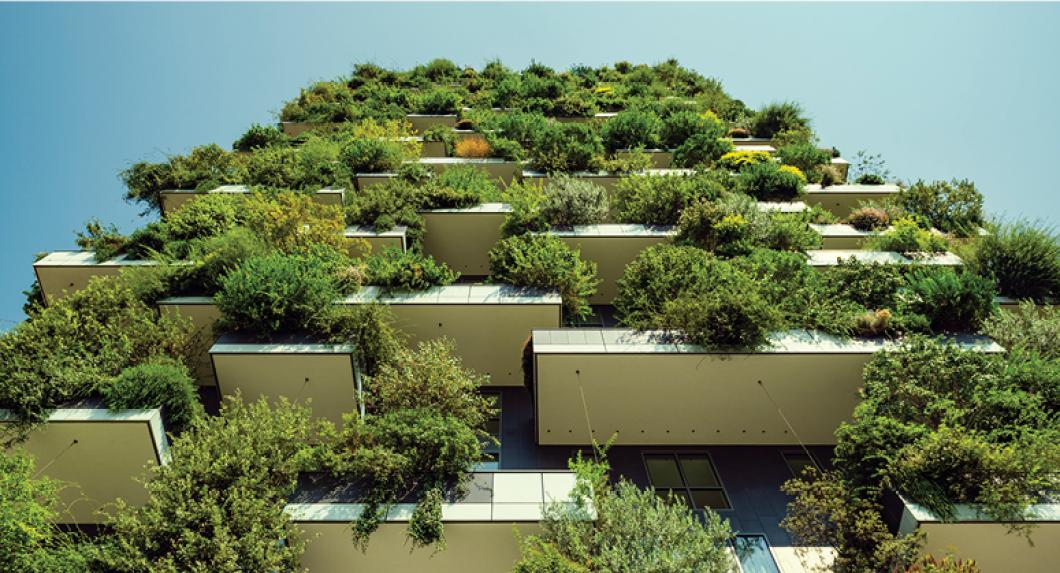 In 2018, New York became the first US city to require buildings to publicly display letter grades indicating their energy efficiency. So when the law goes into effect in 2020, you’ll see an A, B, or C on front doors, similar to the way restaurants currently feature their health ratings. New York is also making efforts to increase the greenery dotting the city’s skyline through recent legislation that provides larger tax breaks to owners who install green roofs in locations where they can offer the most social and environmental value. These actions are part of a slew of urban initiatives to advance and strengthen environmental protections.

Both the letter grades and the changes to the green roof tax abatement program were inspired by research from Danielle Spiegel-Feld ’10, executive director of NYU Law’s Frank J. Guarini Center on Environmental, Energy and Land Use Law. She and the center’s deputy faculty director, Katrina Wyman, detail the rise of cities as environmental vanguards in their forthcoming article, “The Urban Environmental Renaissance,” which explores how major cities have stepped up greening measures in recent decades, and have accelerated their efforts in response to the federal government’s undoing of Obama-era regulations intended to reduce greenhouse gas emissions and secure other environmental improvements. The piece compares this era to a period between the early 1800s and later 1900s, when cities operated fairly independently with regard to water management, sanitation, and air quality. That changed with the passage of landmark statutes, including the Clean Air Act and Clean Water Act, in the 1970s, as the federal government finally took the lead on environmental standards.

Spiegel-Feld and Wyman joined NYU News to discuss this shift and how some cities are reassuming their historic role.

Why have cities reemerged as leaders on environmental issues?

Wyman: There are a number of factors that have led some cities to revive their historical role in developing environmental law. Some of the factors are economic.  Many large cities, particularly those along the coasts, are substantially wealthier than they were in the 1970s, so they can now afford to invest in environmental protection.

Urban economic growth also appears to have been decoupled from pollution. The new wealth in leading cities flows not from manufacturing industries, which are to a certain degree inherently polluting, but from service and knowledge-intensive industries like high-tech, engineering, and even finance, which impose less direct environmental costs. Many of the educated workers working in knowledge-intensive industries seem to value healthy environments and are prepared to pay for them. Leading cities also appear to be investing in environmental protection to draw new knowledge workers and industries.

There also are political reasons for the resurgence of local environmental leadership.  The lack of leadership on environmental issues at the federal level, particularly since President Trump took office, has led many urban populations, which tend to be more progressive than the nation as a whole, to look for alternative paths for advancing the environmental agenda.

How would you describe New York City’s efforts regarding environmental protections in recent years? What are some of the most effective local environmental initiatives pioneered here?

Spiegel-Feld: In recent years, New York City has developed a number of innovative policy instruments that seek to bolster demand for green products. Whereas the federal and to some extent state governments have authority to regulate industrial sources of pollution such as power plants and manufacturers, cities, including New York, generally have quite limited jurisdiction to regulate these sources.

What they can do, however, is incentivize their residents to buy fewer products from heavily polluting industries and choose green alternatives where they exist.  One way of framing the dichotomy is to say that while the federal and state governments have developed “supply side” environmental policies over the years, cities are focusing on “demand side” solutions.

New York City has adopted several notable demand side policies in recent years. For instance, in 2009, the city adopted a requirement that all large buildings provide information about how much energy they used in the preceding year. This data is then used to compute how energy intensive a given building was compared to similar properties. Building off a proposal that the Guarini Center laid out in 2016, starting this January, the annual energy use data that the city collects will be translated into letter grades which will be posted in buildings’ entrances, similar to the way health grades are posted at restaurants. The idea of the law is to create awareness of the relative energy intensity of different buildings, which will hopefully increase demand for highly efficient properties.

There are numerous other examples of innovative policies that are being implemented or considered here as well. In April, the city passed a landmark package of bills known as the “Climate Mobilization Act” which, among other things, set a firm cap on the amount of energy that buildings can purchase from the grid or burn on site without paying a penalty. New York City is the first jurisdiction in the nation to adopt such a mandate.

New York State also passed legislation last month that will provide a first-of-its kind tax abatement for green roofs in the city that varies the amount of funding available based on the location of the property. Buildings in areas where vegetated roofs would confer the greatest social value—because the particular area has the most pressing need to control stormwater runoff or its residents are particularly vulnerable to the impacts of the urban heat island—will be granted more substantial abatements than roofs in other areas. The Guarini Center was also closely involved in the development of this proposal, which builds off our longstanding interest in helping cities devise market-oriented strategies to solve environmental problems.

What are some of the most pressing environmental concerns for densely populated cities such as New York, Philadelphia, and San Francisco?

Spiegel-Feld: As is the case throughout much of the globe, climate change is the dominant environmental issue at the local level. Cities such as the ones you’ve identified have all made commitments to aggressively cut their greenhouse gas emissions. But these cities also know that their efforts to reduce emissions of a global pollutant can only amount to a drop in the bucket, given their limited jurisdictional reach. As such, they urgently need to take action to adapt to climate change as well. Because cities have more dense populations than other areas, and higher property values, the costs of climate change related events such as flooding pose particularly acute challenges for urban areas. How cities are going to deal with the challenges—and pay for doing so—will doubtless be at the top of local leaders’ agendas in the coming years.

Are there examples of city environmental policies that haven’t worked well?

Wyman: There are two major constraints to local environmental policy, which inform the areas in which they have been ineffective. First, cities have relatively small footprints and they can’t control sources of pollution outside of their jurisdiction. This has historically complicated municipal efforts to improve local air quality because a lot of the air pollution in cities, including New York, comes from sources that are far outside the cities’ boundaries. And in fact, dating all the way back to the late nineteenth century, when American cities started battling against smoke pollution, many cities have struggled to develop local ordinances that materially improve air quality.

Second, partially as a result of their small scale, cities are particularly vulnerable to the economic impacts of regulation because individuals and businesses may more easily move across municipal boundaries in response to rising costs than across state or national lines. Cities’ vulnerability to capital migrations may lead them to avoid enacting regulations that impose significant costs on local industry.

A final issue with which cities have struggled, often without great results, is to ensure that environmental amenities, such as parks, and environmentally undesirable facilities, such as wastewater treatment plants, are fairly distributed among disadvantaged and advantaged communities. In New York City, as in many other cities throughout the country, low-income communities of color have often been burdened with a disproportionate number of environmental disamenities and too few amenities.

Spiegel-Feld: The first thing to note is that not all cities have demonstrated leadership on environmental affairs—not all cities have the resources to step out front on this issue and some cities may not be politically motivated to do so, either. So a major consequence of the federal government stepping back and cities stepping forward is that there may be increasing disparities between the level of environmental protection across the country. One of the justifications for the federalization of environmental law in the 1970s was to ensure uniform minimum standards that all American citizens could enjoy. A municipal-led model undermines that goal.

Wyman: A second major drawback to relying on municipalities to develop environmental policy is that cities don’t have the same administrative and scientific resources as higher levels of government. As a result, cities may not be able to do the research required to develop policies that are grounded in the best available science. So, in short, while cities’ revival as environmental regulators creates an important opportunity to develop policies that complement federal environmental law, it should not be mistaken as providing grounds for diminishing the necessity of developing strong federal regulation as well.