The Problem with Income Inequality: Dan Shaviro and others at NYU Law examine extreme wealth concentration 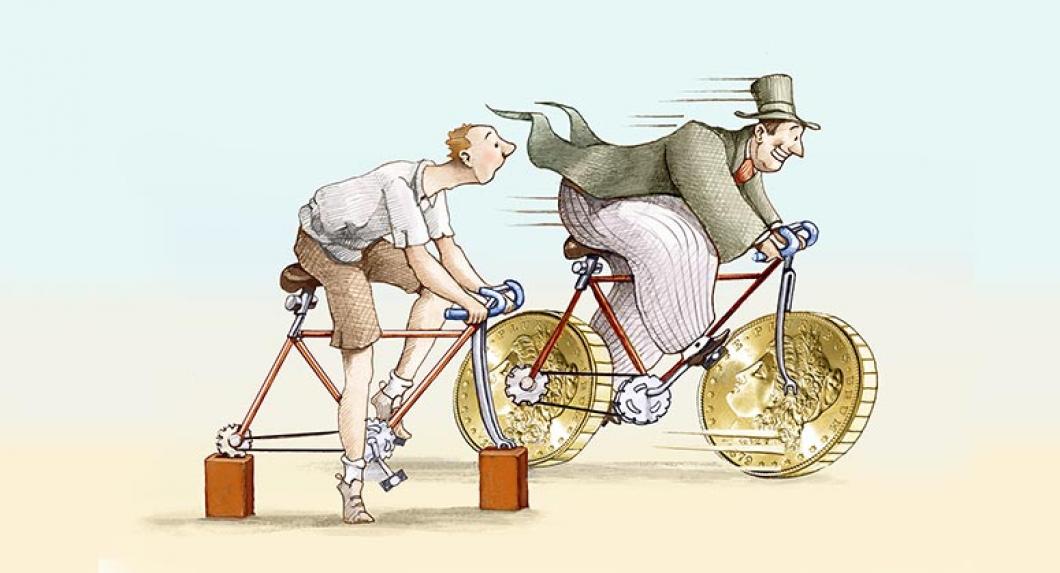 The issue of income inequality was hard to ignore during the US presidential campaign, as a democratic socialist decrying the wealth gap became a serious contender for the Democratic nomination, and a billionaire capitalist won the election with heavy support from the economically marginalized working class. The topic has also garnered a good deal of scholarly attention from NYU Law faculty members, most recently during the fall 2016 Colloquium on High-End Inequality, co-taught by Wayne Perry Professor of Taxation Daniel Shaviro.

“High-end inequality “refers to the enormous gap between the superrich—not the 1.0 percent, but the 0.1 percent—and the rest of us. The superrich held 22 percent of US wealth as of 2012, and Shaviro has long been interested in this rarified cohort and its social impact. He conceived of the colloquium more than two years ago to coincide with a planned visit to the Law School by Robert Frank, a professor of economics at Cornell University who is a well-known advocate of taxing the rich to stem conspicuous consumption. Frank, whose books include The Darwin Economy, joined Shaviro to teach the multidisciplinary colloquium, which featured participation by leading legal scholars, economists, social scientists, and philosophers from a half-dozen institutions.

No single discipline has all the answers, notes Shaviro, adding that the topic has required him to become “an intellectual arbitrageur,” capable of synthesizing the partial analyses of specialists in a range of fields. And because some issues raised by economic inequality are hard to evaluate through narrow economic approaches that ignore sociological insights, Shaviro has embarked on a book titled Enviers, Rentiers, Arrivistes, and the Point-One Percent: What Literature Can Tell Us About High-End Inequality. Works such as Jane Austen’s Pride and Prejudice, F. Scott Fitzgerald’s The Great Gatsby, and Tom Wolfe’s The Bonfire of the Vanities, offer “evidence that otherwise is hard to match regarding vertical social interactions,” he writes in his book’s opening chapter. Using Austen’s novel, for instance, he shows fierce status battles between those in the 0.1% and the humbler merely rich, who are terrified of sliding down the income scale. (This is not Shaviro’s only venture aimed at connecting the literary and the legal. This academic year, he is leading one of the Law School’s 1L reading groups titled Meet the Authors: Novels About Law School And Legal Practice.)

One question examined in both the colloquium and Shaviro’s book is whether we are just being envious if we object to the superrich, or if there are “legitimate” issues of relative status and power that need to be addressed by legislators.  Shaviro has done extensive scholarship on rival tax bases, including examination of proposals to replace the income tax with a consumption tax. In the current climate, he fears that such a change would be “just a poorly designed giveaway to the superrich,” he says.

Shaviro is not alone at NYU Law in examining income inequality. Lily Batchelder, Professor of Law and Public Policy, has published several articles exploring the optimal taxation of large wealth transfers, including “What Should Society Expect from Heirs? The Case for a Comprehensive Inheritance Tax.” She has also documented how low-income families with fluctuating incomes get penalized by the tax system, and proposed practical solutions to the problem. In October, she published an article assessing the effects of Donald Trump’s tax plan on low- and middle-income families relative to top earners. Scholarship in the field by Associate Professor of Law David Kamin includes a 2016 report for the Center for Equitable Growth, “Taxing Capital: Paths to a Fairer and Broader U.S. Tax System,” as well as a Tax Notes article titled simply “How to Tax the Rich.” And Professor Ryan Bubb and Herbert Peterfreund Professor of Law and Professor of Philosophy Liam Murphy have led 1L reading groups that examine economic inequality from political-economy and philosophical perspectives, respectively.

The topic may soon draw even more attention at NYU Law. In October, the Law School announced a school-wide project to support additional research, teaching, and events about income inequality. “Income inequality is the economic issue of our time,” Shaviro says. “Runaway plutocracy is literally destroying our democracy and our country’s promise of widespread economic opportunity.’’

RELATED LINKS
Start Making Sense
On his blog, Shaviro offers summaries of the Colloquium on High-End Inequality intermixed with items on his other scholarship, as well as music commentary.