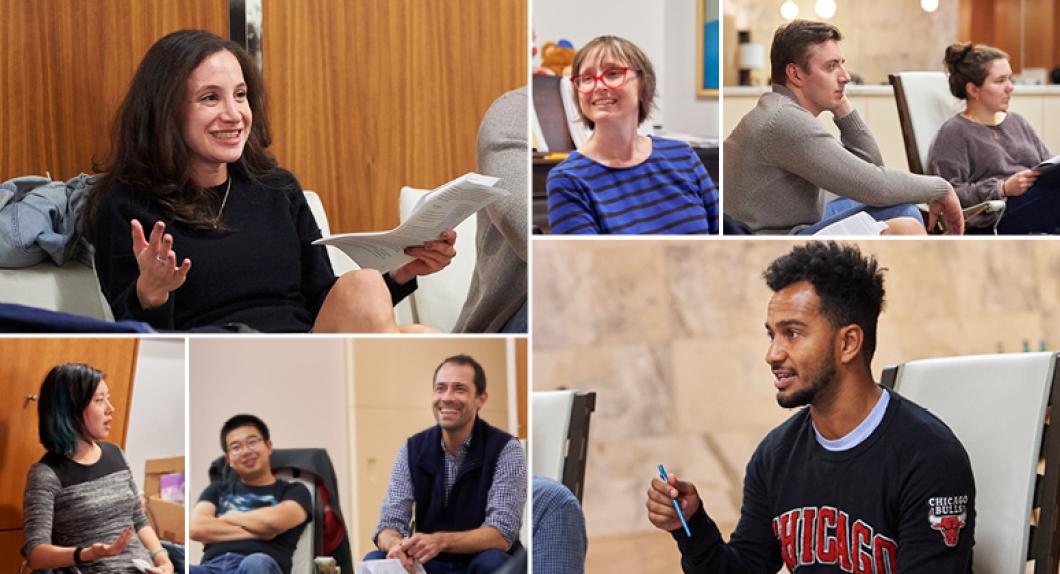 No cold calls, no grades, no exams, no classrooms. For 1Ls, reading groups offer a chance to engage with faculty members in an informal setting, discussing topics that aren’t necessarily part of the first-year curriculum and making connections with classmates who have the same interests.

“This is pretty different. I’m not reading legal cases, I’m reading someone’s textbook written in plain English, as well as articles,” says Daphne Fong ’22, who is in the Animals, Food, and Climate reading group, which focuses on environmental and ethical issues around eating meat. “I know some of the groups watch films or read books, and it’s just a break from the rest of the classes.”

The reading groups, which are not a required course, draw high interest from students, say professors. “I’ve been very happy about the high level of engagement and preparedness,” says Moses H. Grossman Professor of Law Scott Hemphill. “I ask people to read, but just like a book club, I’m not trying to enforce any particular expectation. I think everybody comes prepared every time, which given everything that a 1L has going on, is a sign that they’re excited about the material.”

The class has provided students with a helpful historical context for present-day political and legal processes.

“One of the biggest things that makes me a little pessimistic on the prospect of us passing [antitrust] legislation is that it’s pretty clear that government moves much slower than the pace of industry,” says Logan Cotton ’22. “We’re observing how slowly the government was able to pull together the Sherman Act for Standard Oil. And thinking about 2019, when we have senators asking Mark Zuckerberg very basic questions about how Facebook works when they need to produce legislation that affects this sprawling enterprise, I’m not super hopeful.”

At a recent meeting of the Animals, Food, and Climate reading group, NYU Law students and NYU Animal Studies students snacked on vegan fare and discussed Food, Animals, and the Environment: An Ethical Approach, co-authored by NYU Assistant Professor of Environmental Studies Jeff Sebo, who is co-teaching the reading group with Sarah Herring Sorin Professor of Law Katrina Wyman.

“I had never looked at the topic of food or animals from an animal welfare perspective,” Fong says, “and there are quite a few political, radical views in the room asking, ‘What does it mean to give animals rights? What does it mean to move completely away from industrial animal agriculture?’ And that was pretty interesting to me because I never thought of that as part of the end goal of environmental sustainability.”

The topics are serious. The settings are not.

Reading groups are usually hosted in professors’ homes. At Wyman’s apartment, teddy bears in the living room overlook the discussions, and her children sometimes play in the background.

Hemphill says that while reading groups allow faculty members to explore their topics of interest, they also provide students with glimpses into future careers as new interests develop or existing interests are strengthened.

“I have the sense that at least a few people in the reading group are likely to pursue summer work related to the topics of the group, and hopefully this provides some encouragement on the margin,” says Hemphill.

For 1Ls still looking for a nudge? A quick scan of reading groups for Spring 2020 reveals intriguing titles such as Black Mirror and the Law, which addresses legal issues raised by the popular Netflix series; Policing the Big City, which explores approaches to metropolitan policing with a focus on civil rights and justice; and Borders and Walls, which examines issues of justice and resource distribution as they relate to migration and borders.

How Cities Are Leading the Fight Against Climate Change
NYU Law website, 11/19/19