A three-year advocacy effort by NYU Law’s Family Defense clinic and its partners came to a victorious close in April when New York Governor Andrew Cuomo signed budget legislation that included major reform of New York’s Social Services Law. Drafted by the clinic, the legislation raises the standard of proof required before allegations of child abuse and neglect by a parent or guardian can be added to the Statewide Central Register of Child Abuse and Maltreatment. 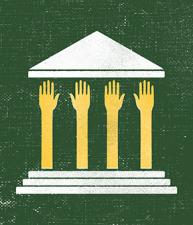 Chris Gottlieb ’97, co-director of the clinic, says that maltreatment allegations disproportionately affect low-income people of color and are often connected to poverty rather than abuse, with accusations of neglect frequently stemming from issues such as lack of childcare or inadequate housing.

“The child welfare system, not unlike our criminal justice system, targets low-income minority communities,” Gottlieb says. “You can pick by zip code which families are going to be targeted for investigation by children’s services.”

With a low burden of proof, parents or guardians have easily been added to the register, but have faced bureaucratic and legal hurdles in having their names removed, even when allegations were found to lack credibility. With the register records available to certain employers, people accused of abuse or neglect have been further penalized with limited employment opportunities, Gottlieb adds

Efforts to reform the law began when Gottlieb was approached by Joyce McMillian, then the director of programming at the Child Welfare Organizing Project, who sought help in addressing the inequities perpetuated by the current law. The Family Defense Clinic joined McMillian in creating a diverse coalition, the Parent Legislative Action Network (PLAN), composed of lawyers, affected parents, community activists, and non-profits organizations, who were invested in changing the law.

Clinic students like Kate McMurchie ’21 saw the need for reform firsthand through her casework helping parents amend and seal their records. “The process is very confusing for parents because when a case is indicated against you, you get sent a letter in the mail saying you have a right to contest it, but that letter is not super clear and does not lay out what actually goes into contesting a case,” McMurchie says.

“For me it was a valuable experience to be reminded that my first job is to ask people who are suffering at the hands of the system, ‘What is the problem, what do you want to see happen, and how can I be useful to you in fighting for that?’” says Zoe Ridolfi-Starr ’21.

As PLAN’s advocacy gained momentum, it caught the attention of State Senator Velmanette Montgomery, who sponsored the bill. The new legislation, which goes into effect on January 1, 2022, raises the standard of evidence required to substantiate an abuse or neglect case from “some credible evidence” to “a fair preponderance of evidence,” so that an allegation will only limit employment when the evidence indicates it is more likely than not to be true. Under the new law, when family courts dismiss allegations, parents will not need to separately litigate to clear their records in the register.

The reform also gives parents who challenge their records the chance to show rehabilitation and that allegations are not relevant to working with children. Finally, the legislation shortens the length of time that employment opportunities are limited by providing automatic sealing of neglect records after eight years.

“It was inspiring to see this coalition come together to draw attention to an issue that isn’t really discussed in the media very often, and to be able to get the key players to let the legislature know that this needed to change,” Gottlieb says. “The clinic focuses primarily on helping individuals with their own cases, but to be involved with some systemic reform is very rewarding too.”