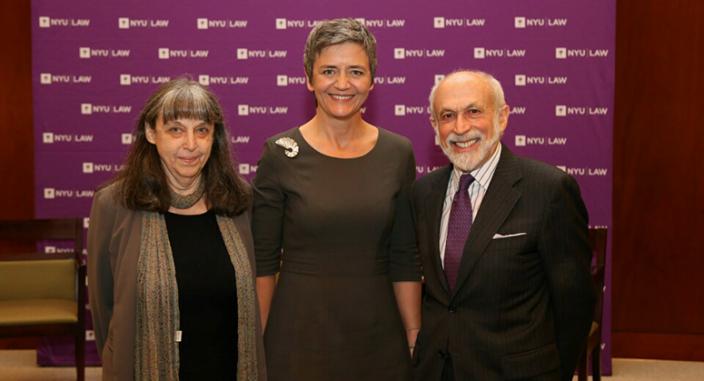 Margrethe Vestager, the European Union’s new competition commissioner, came to NYU School of Law on April 20 to deliver a speech on “Enforcing competition rules in the global village.” She spoke just days after making headlines with the announcement that the EU was filing antitrust charges against Google. A subsequent profile in the New York Times referred to Vestager as “Google’s steely foe in Europe.”

In her remarks at the Law School, sponsored by the Competition, Innovation, and Information Law Program, Vestager discussed the implications of globalization on the work of competition-law enforcers. Over the past 25 years, she noted, the number of competition agencies in the world has increased from around 20 to approximately 130. “The global marketplace brings benefits, but also increases the need for a robust legal framework to ensure that markets stay competitive,” she said.

Key to establishing that framework, said Vestager, was “building a strong global antitrust community, both among enforcers and practitioners that share the same basic values and objectives.” To foster international cooperation on antitrust policy and enforcement, Eleanor Fox ’61, Walter J. Derenberg Professor of Trade Regulation, helped found the International Competition Network 15 years ago. Vestager said the ICN is now “the main global forum of competition agencies.” In recent years, Vestager noted, the European Commission has cooperated with non-EU agencies in 62 percent of its enforcement decisions.

During a lively and candid Q&A following her address, Fox noted that, while Vestager had spoken of convergence in antitrust enforcement, the EU’s just-filed case against Google represents the opposite, since US monopoly regulators declined to pursue charges against the company. Vestager said that her office investigates what happens in Europe, and there may be “differences in the concrete market situation.” Noting that she has respect for her US counterparts, she added, “There will be times of divergence.”

“Our students of both antitrust and EU law were excited to meet and hear Commissioner Vestager,” Fox said afterward. “She is the most prominent antitrust enforcer in the world. She gave us a world view and European view of competition law and policy that, while always grounded in facts, embraces both economic and human benefits and is deeply linked with the interdependence demanded by globalization.”