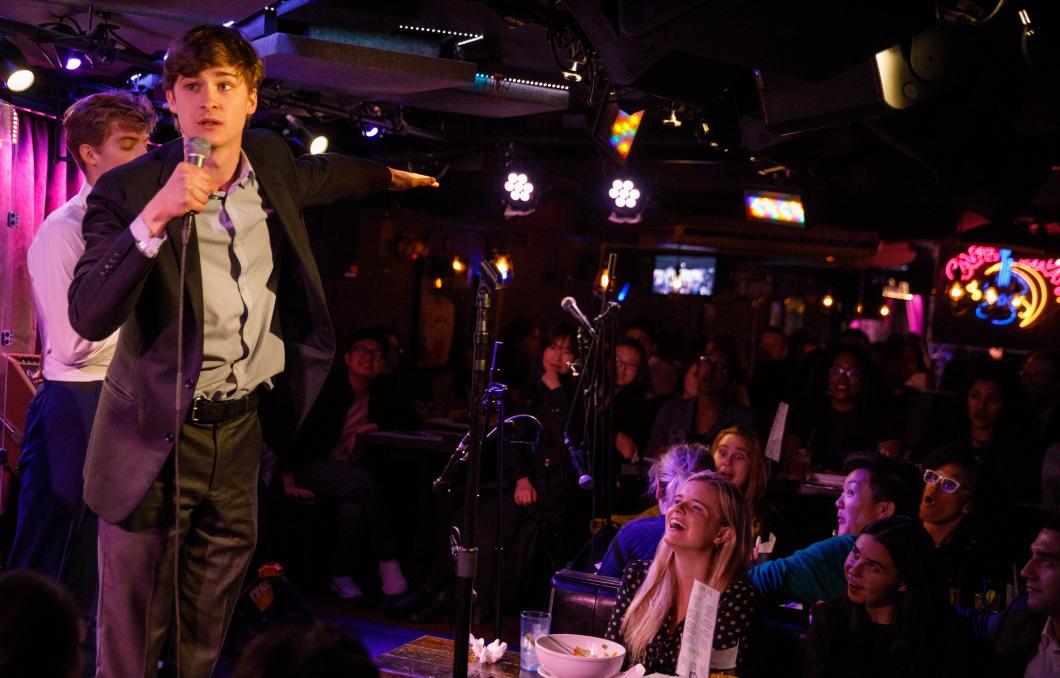 When you’re just starting out in an industry, it can be challenging to anticipate the kind of on-the-job scenarios you might encounter—unless you have inside intel. In November Michael Weinberg, executive director of the Engelberg Center on Innovation Law & Policy, sought to provide just such insight with a unique event focused on tech law.

During “Legal Madness,” an open mic event co-organized by Weinberg, six actors delivered monologues that described uncomfortable, awkward, and even frightening moments that lawyers had experienced at tech companies and startups. Some 200 people packed Macdougal Street nightclub Café Wha? to hear the stories, which were all based on the real-life experiences of a range of lawyers in the tech sector (who remained anonymous).

“[The CEO] confidently instructed me to pick an ice cream flavor for every contract that I was writing and to write the contract to go along with that ice cream flavor,” said actor ChiWen Chang, playing a befuddled attorney. “He said that not all contracts had to be rocky road. Some could be chocolate—or even vanilla…. I still have no idea what he was talking about.”

“Legal Madness” stemmed from a conversation between Weinberg and Sarah Feingold, a fellow at the Engelberg Center, about wacky past job experiences. Client confidentiality rules prevent lawyers from publicly discussing their experiences, but Weinberg and Feingold decided to collect accounts anonymously from attorneys, then hire directors and actors—all students and alumni from NYU Tisch School of the Arts—to bring these stories to the stage.

“Those [stories are] entertaining obviously, but also have a lot of informational value, and they are the kind of stories that are hard to access when you’re just starting at a tech company or trying to understand what it would mean to have one of these jobs,” said Weinberg.

Among the monologues were accounts of hardhearted CEOs, T-shirt fires, mystery dogs, and clogged toilets. Tisch alumna Reilly Hilbert portrayed a regretful man who related how he’d used the term “sausage making” and found himself in a downward conversational spiral with his colleagues.

“It’s always really interesting to get text that is personal,” said Hilbert. “With playwrights’ words you can be a little more disrespectful, for lack of a better word…but it was harder to want to do that because these people had earnest stories that they were bringing forward.”

The Engelberg Center, whose mission is to examine how law and policy can support innovation, continues to collect stories about working in the tech industry, and hopes to have another Legal Madness event in the future.

“We got great feedback afterward. People really enjoyed it and they enjoyed it both for the event itself and because it was kind of a new way to engage with things that happen at a law school,” says Weinberg. “More traditional law school events are great, but it’s nice to switch it up every once in a while, and give people a new entry point into some of the work that we do.”

Trio of conferences explores the impact of Big Data and artificial intelligence on law and the legal system
NYU Law website, 1/25/19