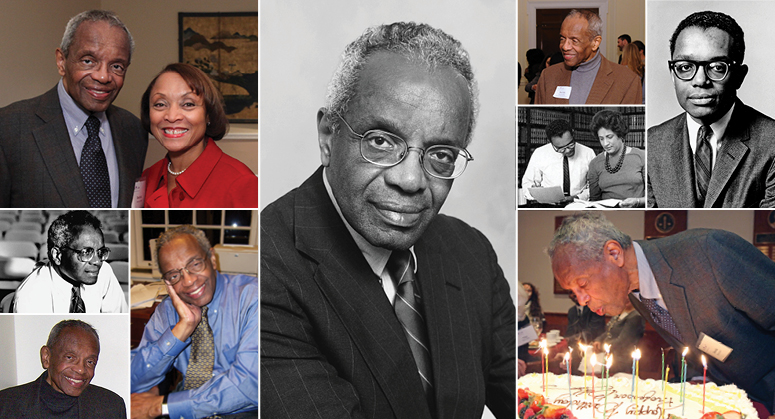 On November 12, NYU Law celebrated 25 years of the annual Derrick Bell Lecture on Race in American Society. The lecture, which honors the life and legacy of the late civil rights lawyer and NYU Law professor Derrick Bell, brings a preeminent scholar or activist to the Law School community to discuss the future of racial justice in the United States.

This year’s lecture was given by Jasmine Gonzales Rose, professor of law at Boston University School of Law and associate director for policy at the Boston University Center for Antiracist Research. Co-hosted by NYU Law’s Center on Race, Inequality, and the Law (CRIL) and the Office of Development and Alumni Relations, the lecture included musical tributes and a performance by the First Presbyterian Church of Brooklyn Choir. To coincide with the anniversary, the New Press has published a collection of the previous Bell Lectures.

“[Bell’s] impact on our law school and on the law and society more broadly, really cannot be overstated,” said Dean Trevor Morrison in his opening remarks, noting that Bell taught at the Law School for 20 years until his passing in 2011. “His leadership as a scholar, as a teacher, as an activist, helped foster critical dialogue on the progress, or lack of progress, of racial reform in the United States and on how to move forward on vital issues of racial justice.”

The Derrick Bell Lecture began in 1995 to celebrate Bell’s 65th birthday and continue his legacy of pursuing racial justice through scholarship and direct action. Throughout his career, Bell was a tireless advocate for civil rights, and his writing and scholarship is foundational to critical race theory, which examines the way that racism is coded into legal doctrine and institutions. Past presenters of the lecture have included Sherrilyn Iffil ’87, president and director-counsel of the NAACP Legal Defense and Educational Fund; Michelle Alexander, author of The New Jim Crow: Mass Incarceration in the Age of Colorblindness; and Bell himself. Carving Out a Humanity: Race, Rights, and Redemption, the newly published collection of Bell Lectures, examines the backlash against affirmative action and ways that US cities and schools perpetuate segregation, among other topics; it was co-edited by Bell’s widow, Janet Dewart Bell, and CRIL executive director Vincent Southerland.

In her opening remarks at this year’s lecture, Dewart Bell noted how much her late husband loved to teach, saying that a lecture in his honor at the school where he taught was a particularly apt way of remembering him. “It was always students first,” Dewart Bell said. “For him, there was no higher calling than teacher.”

Gonzales Rose began her lecture by noting Bell’s belief that racism was a major structure in American legal doctrine that could not be overcome by small reforms. With this in mind, she said, we need to evaluate the legal apparatus that must be reformed in order to create larger structural change. In particular, Gonzales Rose pointed to the need to eliminate racism in how evidence is used in legal proceedings.

Tracing the history of evidence, Gonzales Rose noted that for much of American history, race-based witness competency laws prevented Black and brown people from testifying against white people, while allowing white people to testify against all racial groups. “Evidence law no longer overtly grants or diminishes testimonial competence on the basis of race,” she said. “However, this continues to occur in subtle colorblind ways.”

She cited recent police killings of Black and brown people as an example of how race can influence how evidence is weighed: “In cases of police violence, whether deadly force was reasonable comes down to whether or not the victim was threatening,” she said. “Often…there was really no indication that the victim was violent or aggressive in any way, except for racist perceptions of…blackness.”

Gonzales Rose also noted that courts sometimes treat flight from the police as an inherent sign of guilt. Yet many Black and brown people have seen violence resulting from a police presence, and so they may run from police to avoid physical harm, she said. The first step in reform, she said, is recognition that race is a factor in evidence law, which underscores the importance of studying critical race theory.

Watch video of the lecture:

“A Center on Race, Inequality, and Law panel looks at next steps in the struggle for racial justice”
NYU Law website 12/1/20

“Directors of the Center on Race, Inequality, and the Law discuss how 2020’s Black Lives Matter movement differs from past calls for racial equity”
NYU Law website 10/14/20