During a recent visit to NYU Law, Department of Defense General Counsel Jennifer O’Connor discussed “Applying the Law of Targeting to the Modern Battlefield.‎” Her speech, hosted by the Center on Law and Security, focused specifically on how the law is used to strike terrorist groups in places such as Syria and Afghanistan. A question-and-answer period with students, moderated by Dean Trevor Morrison, followed O’Connor’s remarks. 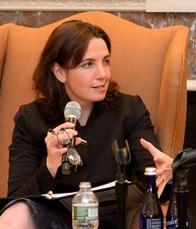 O’Connor was introduced by Zachary Goldman ’09, executive director of the Center on Law and Security, and Ryan Goodman, Joel and Anne Ehrenkranz Professor of Law, who, as special counsel at the Department of Defense from 2015 to 2016, reported to O’Connor. Goodman’s scholarship focuses on the law of armed conflict and national security law; his paper “Targeting ‘War-Sustaining’ Objects in Non-International Armed Conflict” is forthcoming in the American Journal of International Law.

During her time at the Department of Defense, O’Connor worked on the Law of War Manual, which updates principles set in place as early as the Civil War. The manual references the Lieber Code, a document signed by Abraham Lincoln that includes protections for private citizens living in hostile countries—safeguards increasingly important on the modern battlefield as it becomes more difficult to distinguish between civilian and soldier and as critics have questioned US policies.

“Following the law sends a powerful message to those who live in the countries where our military operates and throughout the world that we will fight only our adversaries and not civilians, and we will treat everyone fairly and humanely, even when our foes do not do the same,” she said. “We are following the law because it reflects our core values, the very principles that we are fighting to protect and preserve–in short, it reflects who we are.”

O’Connor touched on the subject of “war-sustaining” targets, also known as “revenue-generating” targets. These are usually oil production facilities or cash storage sites, which are used to pay and recruit fighters and to buy weapons and ammunition. Avoiding civilian casualties has been a special challenge in the fight against the Islamic State of Iraq and the Levant (ISIL), she explained—using the Obama administration’s preferred term for the terrorist group also known as ISIS—as terrorists often deliberately use civilians to deter attacks.

O’Connor encouraged students to consider the Department of Defense as a career option. “The legal issues are fascinating,” she said, “and the sense of mission and the satisfaction that comes from practicing public service law in this area are immense.”