Whether questioning the gap between rhetoric and reality in corporate governance politics or teaming up with top New York dealmakers to teach students about real-world business transactions, NYU Law’s corporate faculty take the conversation to the next level.

Edward Rock should have no trouble calling NYU Law home. Over the course of more than two decades at the University of Pennsylvania Law School, he had established himself as one of the nation’s leading corporate law scholars. But during that time, he also forged deep connections to NYU School of Law, teaching here as a visitor in 2011 and co-authoring numerous articles with NYU Law professors. In July, Rock made his move up the Northeast Corridor permanent, becoming a full-time faculty member at the Law School.

“With all the interesting scholarship and programming occurring at NYU Law and the fact that New York is the center for corporate law and finance, it was an unparalleled opportunity,” says Rock, who will teach Corporations, Corporate Law Theory, and Advanced Corporate Law: Mergers and Acquisitions. He will also establish and head the new Institute for Corporate Governance and Finance. (See "New Faculty" for a profile of Rock.)

Rock and Marcel Kahan, George T. Lowy Professor of Law, have jointly published 13 articles on hedge funds, corporate voting, proxy access, corporate federalism, and mergers and acquisitions—nine of which were ranked among the top 10 corporate and securities articles for their publication year by a survey of corporate and securities law professors conducted by, and published in, the Corporate Practice Commentator. “Scholarship can be lonely, so it’s nice to have someone to work with,” says Rock. “But more importantly, it leads to papers that are better than if they had been written alone. By the time Marcel and I are done, we’ve worked through so many arguments that the articles end up stronger than if we had done them by ourselves.”

The duo’s most recently honored article, “Symbolic Corporate Governance Politics” (which examines “the persistent gap between rhetoric and reality that characterizes so much of corporate governance politics”), is itself symbolic. That’s because it captures a defining attribute of NYU Law’s approach to legal education: top theorists pointing their scholarly lenses at real-world intersections of legal practice and business. 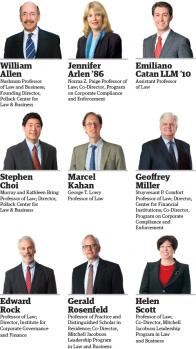 Corporate faculty members have taken aim at a variety of issues recently, often with eye-opening results. In the Stanford Law Review, Kahan and Assistant Professor of Law Emiliano Catan LLM ’10—a specialist in corporate law, governance, and mergers and acquisitions—used empirical research to argue that finance scholars have been “barking up the wrong tree” with their focus on how antitakeover statutes affect corporate managers. Catan and Kahan found them to be largely irrelevant in the face of the more powerful poison pill defense. That defense was created by Martin Lipton ’55, co-founder of Wachtell, Lipton, Rosen & Katz, a firm known for defending companies against hostile takeovers. (See "Adverse Reaction: Professors find fatal flaws in a body of work on takeovers and corporate governance" for an in-depth look at Catan and Kahan’s article.) And Kahan and Rock, along with Stephen Choi, Murray and Kathleen Bring Professor of Law, and Jill Fisch from Penn Law, questioned in the University of Chicago Law Review whether majority voting rules really improve board accountability in corporations. They concluded that reform advocates seem to have initially targeted the firms that are already most responsive, then used “the widespread adoption of majority voting to create pressure on the non-adopting firms.”

Capturing data for such empirical analyses can be challenging, and sometimes it calls for creative solutions. Choi, director of the Pollack Center for Law & Business, wanted to provide researchers, counsel, and corporations with easily searchable and verified data about Securities and Exchange Commission enforcement actions against publicly traded companies. To accomplish his goal, he had to create the Securities Enforcement Empirical Database (SEED), the first of its kind. (SEED was designed, built, and launched by the Law School’s Information Technology Services Department.) “The SEC is often viewed as a black box,” says Choi, whose center partnered with Cornerstone Research on the project. “Our goal is to shed light on securities law enforcement decisions. There are lots of things we want to look at, including the difference between SEC enforcement through administrative proceedings and civil court actions. I’m like a kid in a candy store and just starting to analyze the data.” (See "Cultivating SEED" to read about the work students are doing on SEED.)

Jennifer Arlen ’86, Norma Z. Paige Professor of Law, and Geoffrey Miller, Stuyvesant P. Comfort Professor of Law, broke new ground of a different kind when they launched the Program on Corporate Compliance and Enforcement in the spring of 2014. Recognizing that their specialty was transforming into a dynamic growth area, they created a program dedicated to developing a richer and deeper understanding of the causes of corporate misconduct and the nature of effective enforcement and compliance. (See "Laying Down the Law" to read about the program’s recent events.) Miller (the author of the first casebook to link governance, risk management, and compliance) and Arlen (one of the nation’s leading experts in corporate liability and the newly elected secretary-treasurer of the American Law and Economics Association) also developed in-depth courses for students interested in careers in compliance or enforcement. “It’s often quite hard to get into a white-collar department at a firm,” says Arlen, “but because our students are well prepared, they have been able to work on white-collar matters even as summer associates.”

Signature law and business courses held jointly with the Stern School of Business prepare students for the reality of corporate practice. In these classes (part of the Paul, Weiss, Rifkind, Wharton, & Garrison LLP Transactional and Law and Business courses), law students and business students work together analyzing deals. “Having a mix of JD and MBA students brings a lot to the table,” says Nnenne Okorafor ’15, now a corporate transactional attorney with Debevoise & Plimpton.

“Law students, unlike business students, are risk-averse. The different perspectives made for many really interesting class discussions.” Professors Gerald Rosenfeld and Helen Scott—who co-direct the Mitchell Jacobson Leadership Program in Law and Business for exceptional students pursuing high-level careers at the intersection of those disciplines—think this cross-pollination is essential to success. “Students need to understand that law and business is a team sport,” says Rosenfeld. “Business students need to know that transactions take place within the framework of the law; they shouldn’t be surprised when they’re working with someone with the opposite armband. That’s what they will encounter if they go into transactional work.” In classes such as the Law and Business of Corporate Transactions, Rosenfeld (advisor to the CEO and vice chairman of investment banking at Lazard) and Nusbaum Professor of Law and Business William Allen (the former chancellor of the Delaware Court of Chancery) go beyond analyzing the theory of the deals and host the practitioners who orchestrated them. “We bring in the people who did the deals to help us in the course and, more important, to help teams of students to conduct an anatomy of the deal,” says Rosenfeld. “We look at the drivers of the transaction, but also the roadblocks and how they were overcome.” Guests in recent years have included executives from HG Vora Capital Management, Lazard, Moelis & Company, and Rothschild, as well as partners from leading law firms such as Cleary Gottlieb Steen & Hamilton; Fried, Frank, Harris, Shriver & Jacobson; Gibson, Dunn & Crutcher; Latham & Watkins; Paul, Weiss, Rifkind, Wharton & Garrison; Wachtell, Lipton, Rosen & Katz; and Willkie Farr & Gallagher.

NYU Law’s strong reputation, its deep bench of corporate alumni, and its central location in the heart of Manhattan make attracting such top practitioners easy. “We use the city and its resources and the Law School’s network of resources to really enhance the experience that the students have,” says Scott, who co-teaches the Law and Business of Corporate Governance, as well as two courses with Affiliated Professor Karen Brenner: the Law and Business of Corporate Turnarounds and Leadership and the Ethical and Legal Challenges in the Modern Corporation.

The approach is much appreciated by students like Pat Andriola JD/MBA ’15. “When you go out into the real world, you know what you’re doing,” says Andriola, now an associate at Davis Polk & Wardwell. “We had a networking event with Goldman Sachs, an outreach with Seamless, and got to meet corporate executives at the Mets. They just give you all of the opportunities possible to really get the job done.”

Rock’s new Institute for Corporate Governance and Finance will further strengthen ties between the Law School and the business community. “We’ve reached a period where the largest institutional investors are the deciders in any critical controversy in corporate governance,” says Rock. “This change, long predicted, raises a host of critical questions about where corporate governance is going. I want to gather all the critical people in the same room and have them talk together.” That room, where theorists and practitioners commingle, will be on Washington Square.

Ellen Rosen ’83 is a freelance writer whose stories have appeared in the New York Times and Bloomberg News.