On Thursday, May 22, the Law School’s Convocation was held at Madison Square Garden, in a single ceremony honoring both JDs and LLMs. Sherrilyn Ifill ’87, president and director-counsel of the NAACP Legal Defense and Educational Fund (LDF), addressed graduating students and guests. 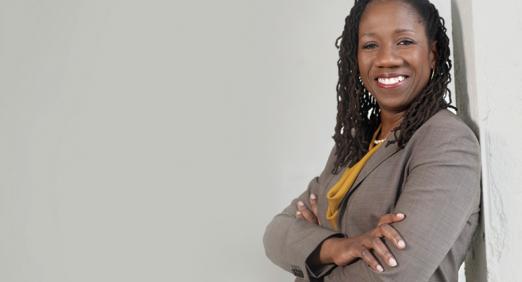 Ifill previously served as a fellow at the American Civil Liberties Union and later as an assistant counsel in LDF’s New York office. During that time, she successfully litigated Houston Lawyers’ Association vs. Attorney General of Texas, in which the Supreme Court held that judicial elections are covered by Section 2 of the Voting Rights Act, which bars racial discrimination in voting practices. She has also served as a faculty member at Maryland Law School, where she ran a clinic for the reentry and reintegration of former prisoners into society. Her book On the Courthouse Lawn: Confronting the Legacy of Lynching in the 21st Century (2007, Beacon Press) examines two 1930s lynchings that took place in Maryland; it uses these incidents as a case study to encourage a conversation about reconciliation.

Graduating students David Leapheart ’14 and Stephanie Yan Ki Chu LLM ’14 were this year’s student speakers. Leapheart is the editor-in-chief of the NYU Law Review and a first lieutenant in the United States Marine Corps. Chu was the winner of the World Bank’s 2014 International Finance and Development Fellowship and a member of the International Organizations Clinic.

On Wednesday, May 21, the University held the 182nd Commencement Exercises for all students.

This year’s other recipients of honorary doctorates included prominent and celebrated figures.

Janet Yellen, the first woman to serve as chair of the Board of Governors of the Federal Reserve System, received a Doctor of Commercial Science degree, honoris causa at the ceremony. She also delivered the commencement address.

Aretha Franklin, “the Queen of Soul” and winner of 18 Grammy awards and a recipient of the Presidential Medal of Freedom, received a Doctor of Fine Arts degree, honoris causa.

Click here to learn more about the 2014 Law School convocation.