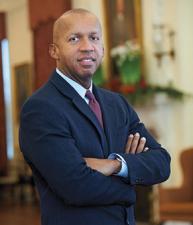 An expert on the criminal justice system and capital punishment, Stevenson joined NYU Law’s clinical faculty in 1998, and teaches courses such as Racial Justice and the Law and Eighth Amendment Law and Litigation. As the executive director of the Equal Justice Initiative (EJI), Stevenson focuses on social justice and human rights in the context of criminal justice reform in the United States. He and EJI staff have obtained reversals or reduced sentences in numerous capital cases, and they have won Supreme Court cases that have significantly changed the constitutional doctrine governing the criminal justice system. EJI is now also active in creating cultural institutions addressing the legacy of racial injustice in this country, including the National Memorial for Peace and Justice and the Legacy Museum: From Enslavement to Mass Incarceration, both in Montgomery, Alabama.

Stevenson has written extensively on criminal justice, capital punishment, and civil rights issues. He is the author of the New York Times bestseller Just Mercy, which won the 2015 Carnegie Medal for Best Non-Fiction, the Dayton Literary Peace Prize, and the NAACP Image Award for Best Non-Fiction. Among the many national and international awards and honors Stevenson has received are the MacArthur Fellowship Award (1995), the Reebok Human Rights Award (1989), the ACLU National Medal of Liberty (1991), and the National Association of Public Interest Lawyers’ Public Interest Lawyer of the Year Award (1996). Bryan has also received honorary degrees from several universities, including Harvard University, Yale University, Princeton University, and the University of Pennsylvania.

NYU appoints University Professors to honor outstanding faculty scholars whose contributions to the NYU community reflect exceptional prominence, influence, and interdisciplinary breadth. In his announcement, Morrison said that Stevenson intends to use his University Professorship to expand on the work that EJI does, developing a health initiative with a focus on rural poverty and the health care needs of people coming out of jails and prisons in the Black Belt of Alabama. In doing so, Stevenson expects to work with graduate and professional students and alumni in a range of fields, including medicine, nursing, public policy, social work, and business, as well as law. Stevenson also plans to create pathways for graduates and students in various programs and schools to help them become directly involved in racial justice, anti-poverty, and health equity work.

“Narratives of Injustice: The Equal Justice Initiative, led by Bryan Stevenson, is opening the National Memorial for Peace and Justice and the Legacy Museum”
NYU Law website 4/25/18