Scholars and advocates analyze racism and inequality in public schools

This year, Stuyvesant High School, one of New York City’s premier public schools, admitted just seven black and 33 Latinx children into its incoming class of 895 students—although two-thirds of the city’s public school students are black or Latinx. The disproportionality and others like it were scrutinized an October 28 panel discussion, “The United States: Separate and Unequal.” Civil rights scholars and advocates looked at the systems, from standardized testing to residential zoning to special education diagnoses, that legally segregate public assets and provide communities of color with less and worse access to public goods. 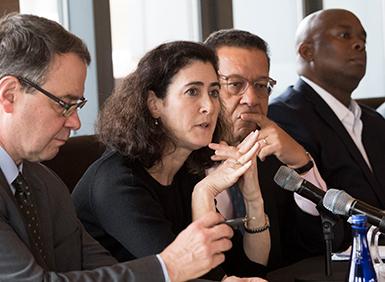 Richard Buery: “The problem with this idea—the idea that standardized tests are an effective way to sort students into schools—is it doesn’t work in a system where opportunity is so clearly a function of race and socioeconomics. The reality is that the myth of meritocracy, this idea that we’re going to use these tests to sort people fairly, really in a lot of ways has simply replaced one sort of dynastic system, the aristocracy,…with another one called a meritocracy.”

Dennis Parker: “Schools are becoming increasingly segregated on the basis of economic status…. The implications of this economic segregation, particularly when allied with racial and ethnic segregation, are serious. It contributes to the growing achievement gap, in the gap in college attendance and completion, and it has a profound impact on the resources that are available to students.”

Kim Sweet: “We see evidence every single day in the cases that we handle, that race and ethnicity impact how students with disabilities are both labeled and sorted within New York
City’s special education system…. A white student with ADHD will be more likely to be labeled ‘other health impaired,’ which generally has less stigma attached to it, and a black student will be more likely to be labeled ‘emotionally disturbed.’ These labels have all kinds of implications for students’ education, including, very importantly, whether they are educated in an integrated or segregated environment.”