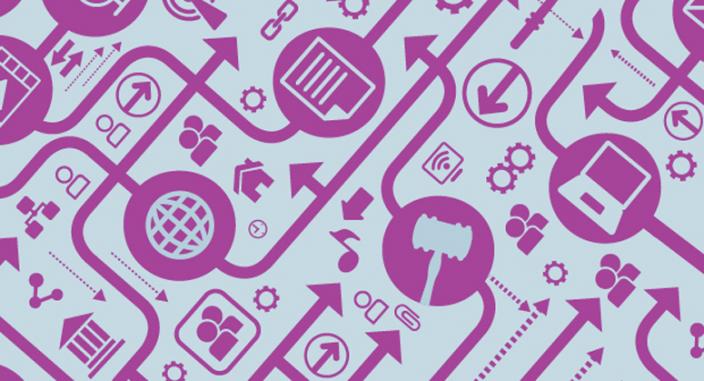 From contracts to court dockets, there are vast quantities of documents a lawyer must review that make the legal profession perfectly ripe for technological innovation. A number of NYU alumni have answered the call by founding legal tech startups. Whether creating mobile contracts or organizing litigation data, these companies are set on shaking up the legal industry.

Catherine Hammack ’08, the founder of Jurispect, knew even before law school that she was interested in entrepreneurship. “I think the biggest influencer during the law school days for wanting to go on this path and feeling like it was a viable option were my peers,” says Hammack. “I remember being in Mercer dorm coming up with different start up ideas and trying to figure out which ones were good ones and how to implement them.”

The idea for Jurispect was ultimately borne from Hammack’s experience working in companies weathering a variety of legal crises. Before law school, Hammack worked as a CPA during the Enron crisis; she then graduated law school in 2008 at the height of the financial crisis. After a stint at Bingham McCutcheon, Hammack joined the advertising policy team at Google, where she became immersed in the tech giant’s data-driven decision-making philosophies.

“I realized, looking back at all of the corporate crises that I knew firsthand early in my career, that there could be an opportunity for applying these machine-learning and data analytic-techniques to the law,” says Hammack. With Jurispect, she says, she hopes to help companies understand what risks are trending, and ultimately, to “maybe prevent some of these big catastrophes from happening in the future.”

“It was completely by accident,” says Alma Asay ’05, founder and CEO of Allegory Law, of her own entry into the field of legal technology entrepreneurship. A former litigator at Gibson Dunn, “I actually loved litigating,” she says. “I had a blast on my cases, had a great team, but as any other litigation team these days, we had challenges corralling all the information and making sure we stayed on top of everything, and had the answers at our fingertips.”

While at Gibson Dunn, Asay and her team would create Excel spreadsheets tracking all relevant information for every document being used in their current litigation. Asay began collaborating with a team of programmers to build software that would help litigators organize and cross-reference the information found in documents—from witness meetings to depositions to settlement discussions. “I just started working with these guys and mapping out what I would want my dream software to look like as a litigator,” Asay says. “I ended up leaving Gibson to go do this full-time—and I just woke up and realized that I was an entrepreneur, with a startup in legal technology.”

“I’d always been technologically minded, and I saw a lot of potential to use technology to improve the legal process,” says Richard Lee ’05, who worked in commercial litigation for six years at Debevoise & Plimpton, with a focus on intellectual property and digital media, before entering the start-up world. Lee’s company, Caseflex gives easy web access to court dockets and filings. While CaseFlex currently focuses on federal court documents, Lee plans to eventually expand to include state court filings and other legal regulatory data.

Lee had no formal background in computer science, but he taught himself the requisite skills so that he was able to work alongside the developers working on Caseflex. “I really wanted to get my hands dirty, so to speak, and to understand at a high level what was going on,” Lee says. “So I just sort of sat down and hacked alongside the folks that I had hired. Over time as I got more practice, and better at it, I took on more and more of the code base.”

While Asay and Lee used their experience at litigators to create companies to maximize the efficiency of litigation work, Noah Waisberg ’06 has drawn on his time practicing in the corporate group at Weil, Gotshal & Manges. Waisberg is now the CEO of Diligence Engine, a company focused on improving the process of due diligence. “Contract review is one of the main tasks that junior corporate associates do, and it’s not done that well,” Waisberg says. “They don’t like it, they’re not good at it, and it takes massive amounts of time. But it’s a process that’s systematic enough that technology can really help with it. In tests, users of our system have done more accurate contract review work in 20–60% less time.”

Vinay Jain ’09 works in the realm of transactions—but as the chief legal officer at Shake, a mobile app that allows users to create, sign, and send legally binding contracts. Unlike the legal tech start-ups helmed by his fellow alumni, Jain’s company is less focused on optimizing work that lawyers already do, and more concerned with reaching clients who would not necessarily have access to contracts or legal information.

“There is a huge part of the legal market that lawyers aren’t touching," Jain says. "We hear about it fairly often on the access-to-justice side, but much less so on the transactional side. For a small business or freelancers, the size of an individual transaction rarely justifies the cost of hiring an attorney, but in the aggregate, we're talking about billions of dollars' worth of small deals. It's the opposite of Biglaw—it's 'Tinylaw.'”

Helming a start-up is not without its challenges, from finding investors to courting clients. But Asay, a travel-enthusiast who has been to every continent, says that her work as an entrepreneur has been “the closest thing I’ve found to traveling at home.” It may have its challenges and setbacks, but it also comes with “that feeling of waking up every day and being comfortable not knowing what’s going to happen, and being game for the adventure, wherever it takes you.”