A diplomat for democracy, Ajani Husbands ’17 enters law school to become more engaged with US policy 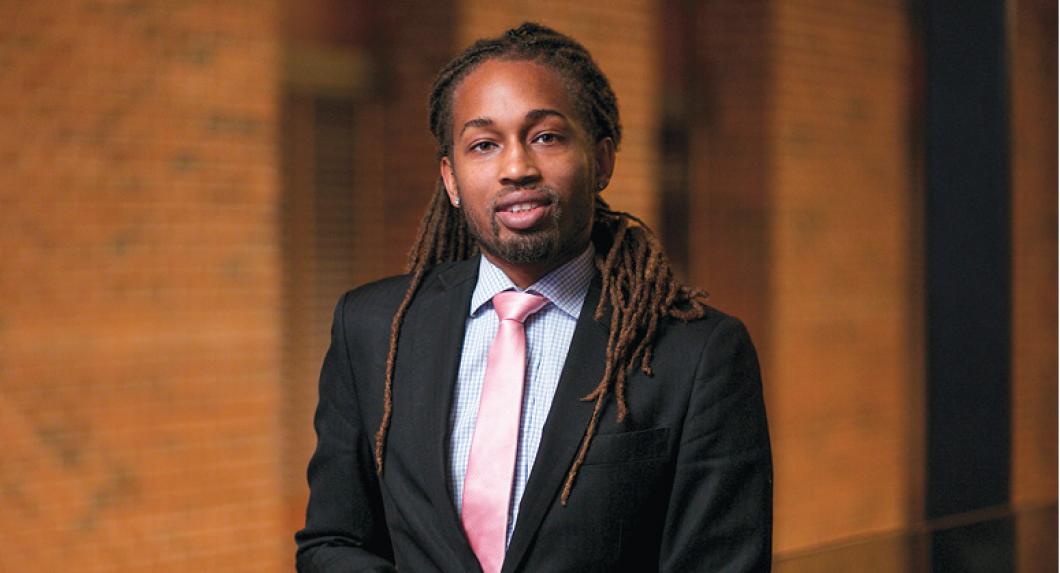 Ajani Husbands ’17 lived in four different countries during seven years with the US Department of State. In his last posting, South Sudan, where he served as spokesperson and cultural attaché for the US embassy, he found himself at the airport wearing a helmet and flak jacket as he helped resident Americans leave a country suffering from violent civil unrest. Less than a year after the US military evacuated Husbands and the rest of his team, he arrived at NYU School of Law.

Husbands had applied to law school while working under Ambassador Susan Page, herself a lawyer who had worked on the peace agreement between Sudan and South Sudan as well as the latter’s constitution. The continual practice of describing democracy to foreigners not used to living in one ultimately led Husbands to a jarring realization. “You’re trying to sit down and explain that all this works in the grand, cosmic scheme of things,” he says of his diplomacy work. “But then you get home and you turn on the TV and you see Ferguson on fire. Part of me wanted a chance to come back to the United States and be a little bit more engaged in what’s going on.”

His decision was not impulsive, however. In 2012, while working as a vice consul in Haiti, he was so moved by the Trayvon Martin killing in Florida that he wrote an emotionally searing online piece, “The Bullet Next Time: An Open Letter to My Unborn, Black Son.” The best way for him to make a personal contribution to addressing systemic racial issues, he decided, was to learn how law functions and interacts with policy and grassroots organizations.

He entered the application process with modest expectations. Then he was accepted to NYU Law as a Root-Tilden-Kern Scholar; Page urged him to grab the opportunity.

Husbands describes the Root-Tilden-Kern Program as an incredible resource for pursuing his public service interests. “You’re always able to tap into people who either have done some of the things you’re thinking of or are doing entirely different things that you didn’t know were an option.”

Husbands is currently conducting directed research under Vice Dean Kevin Davis as a Lawrence Lederman Fellow in Law and Economics. He is working on establishing metrics for how legal services organizations exert a net-positive economic impact on communities, then using those measurements to leverage more funding. Having experienced some of the typical challenges faced by cash-strapped nonprofits while he was working for the Georgia Legal Services Program’s Farmworker Rights Division last summer, he is particularly interested in the potential of social impact bonds, which have not yet been used for legal services.

As a 2L, Husbands still has time to consider his post-graduation plans, but mentions that the prospect of working as a State Department attorney or in a non-lawyer role as a regional refugee coordinator both have their appeal. In the longer term, Husbands wants to find ways to address the root causes of limited resources in low-income communities, and says that social enterprise models could play an important role in those endeavors.

Outside of his studies, he writes for the Life at NYU Law student blog and is active in mock trial as well as the Black Allied Law Students Association; he recently coached the BALSA mock trial team to a third-place victory in regional competition. Husbands also co-resurrected the African Law Association last semester with a panel of high-level State Department officials discussing—fittingly enough—Sudan and South Sudan.

Even with all these activities, he makes time to fly every month to Belize, where his wife, Emilia Adams, a US diplomat working in public affairs, is stationed. They met while working in Pakistan—she was stationed in Lahore while he was in Islamabad—and were married after Husbands started law school.

Their son was born last May. Husbands stays connected to him and his wife as much as possible, taking regular trips to Belize and using Skype and FaceTime in between. Although the son to whom Husbands once wrote an anguished letter is no longer theoretical, the new father isn’t rushing to introduce the harder truths. Besides, there are more immediate matters to address.