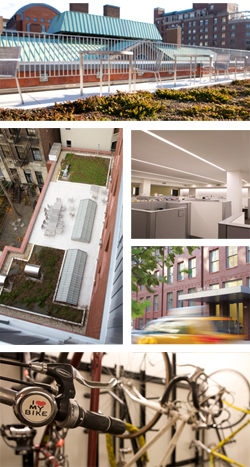 The U.S. Green Building Council (USGBC) has awarded Wilf Hall a LEED Platinum Standard rating, which is the USGBC’s highest certification for Leadership in Energy and Environmental Design. “We strive to be good stewards of the environment, and Wilf Hall is our most visible demonstration of that commitment,” said NYU Law Dean Richard Revesz. “It is extremely gratifying that Wilf Hall is one of only six new buildings in New York City to receive a LEED Platinum certification.  I am very grateful to our trustees, Leonard Wilf '77 and Mark Wilf '87, whose vision and generosity made the building possible.” Leonard and Mark are cousins and partners in real estate development firm Garden Homes.

In order to achieve platinum certification, Wilf Hall was evaluated in five categories, including water and energy efficiency, indoor environmental quality, and innovative design. A green roof and two planted terraces, bedded with grasses, ferns, and trees, help insulate the building year-round and filter pollutants out of rainwater, thereby reducing runoff into the city’s sewers. Terraces on the second and sixth floors serve as informal meeting areas, with walking paths enclosed by creeping perennials and grasses. Other notable features include bicycle storage and showers for commuting riders.

The building was also designed to contain the Provincetown Playhouse. The playhouse, established in the 1920s, premiered many of Eugene O'Neil's plays and continues as a working theatre run by the NYU Steinhardt School of Education to hold classes, readings, and storytelling evenings. Wilf Hall retains all four walls of this historic gem. Located at 139 MacDougal Street, it now houses a dozen NYU Law centers, programs, and institutes, as well as admissions offices and offices for academic fellows.